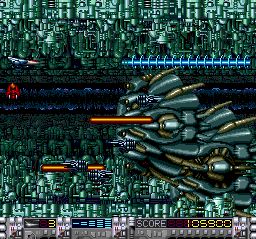 While the PC Engine was a solid number two in Japan its aging hardware was starting to fall behind the Genesis and SNES. Clever programming tricks allowed its games to shine but it was only a matter of time before consumers moved on. The Supergrafx was supposed to be its successor, boasting true 16-bit hardware to allow it to better compete alongside those titans but in the end it would go on to become one of the industry’s biggest failures alongside the 64DD and Virtual Boy. The system failed so badly that only seven games in total were created for it with two of these also being backwards compatible; even the Virtual Boy eventually had a library of almost 50 games in Japan.

Of its seven total games Aldynes is one of its highest profile. At its core Aldynes is a standard shooter of which the PC Engine had plenty but the added grunt allowed it to show off many tricks not possible on the older system and served as an excellent showcase of what the Supergrafx was capable of. It also doesn’t hurt that the game itself is fantastic.

The number of weapons is kept small but all three have their uses throughout the game. The typical laser is the most powerful but starts out thin but with further power-ups will increase in size dramatically. The rebounding laser travels along the floor and ceiling in an arc making it perfect for enclosed spaces, less so for boss battles. Lastly the spread gun fires in a wide arc that covers a good portion of the screen but lacks power. Curiously if you hold the shot button you’ll power up a shield that will absorb bullets but can also destroy smaller enemies on contact, not that it’s a safe option.

Speaking of options you can have up to four which isn’t impressive on its own but they are bigger and more versatile than in most other shmups. They can be set up in 3 different formations: the standard focused fire option where they supplement your attacks, a rotating shield by holding down button I and to follow your ship. The last option is the most useful. Here they move up and down and will aggressively attack any enemies within their range. Having up to four options simultaneously is almost game breaking yet the game still manages to balance them out. Even though Seek mode is the best option it isn’t completely infallible. The game throws so many targets once that they are easily confused and with the bigger ships they are more or less useless unless you switch to focus fire mode. Also changes in terrain can potentially leave them separated from you and vulnerable.

You’ll still need expert flying skills to dodge the hordes of bullets that pepper the screen let alone survive against some of the tougher bosses. You won’t have an easy ride to see the end credits as the game picks up significantly after the first few levels. The singe hit deaths are soul crushing since they send you back to a checkpoint with no weapons and any shooter veteran knows this is usually an impossible situation to recover from. Somehow in spite of that the game is still fair in its challenge.

Visually the game is spectacular, far beyond almost any shooter released for the stock Turbo Grafx. Despite lasting a scant seven levels the game manages to avoid the typical gaming clichés of an ice level, fire level, etc. with most of the game taking place in industrial environments. The scrolling is often seven or eight layers deep which is truly amazing to see in action. Stage three in particular is insane as its background layers stretch back as far as the eye can see with multiple screen filling warships and bullets flying everywhere. Sights like these aren’t uncommon and there is no trace of slowdown whatsoever.

The bosses are all gigantic mechanical monstrosities that leave little room to maneuver; at this point the designers are basically showing off. There are even gratuitous scaling effects present throughout the game. The game has the look of a late era Genesis shooter like Lightening Force except with more color (at times) yet it was released in 1991. If the intent were to sell gamers with its production values the developers definitely succeeded.

Even the music is pretty catchy; the sound hardware is the one area the Supergrafx did not really improve on the Turbo Grafx yet the composers have graced the game with a great soundtrack. Unfortunately the sound effects lack any impact which dulls the overall aural component.

Aldynes is a great game but unfortunately it is hard to track down let alone play. Because the Supergrafx never left Japan and was a flop it sells for large sums of money on Ebay (usually over $300). The game itself it cheap in comparison but your best bet is to buy it on the Japanese PSN. It doesn’t reinvent the wheel but does offer a glimpse of what could have been if the system were actually successful.