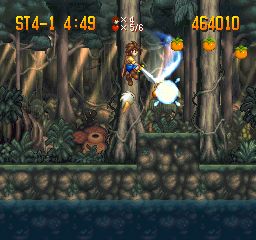 The Adventures of Little Ralph is the type of platformer those of us naive as to where the industry was headed expected to see more of. As 16-bit waned we as gamers were treated to a feast of future classics such as Donkey Kong Country 2, Yoshi’s Island 2, Sonic & Knuckles and many others. It isn’t far fetched to say that most expected a healthy amount of beautiful 2d stuff alongside the new 3d games and when we saw titles like Astal and Gunner’s Heaven the future looked bright. But publishers had other plans in mind and nearly abandoned 2d altogether. This wouldn’t have stung so much if so much if that early period of 3d gaming wasn’t so bad. We went from tight mechanics to publishers charging us $50 for whatever aborted fetus of an idea they managed to cobble together in 3d as they learned the ropes.

However! As damning as that sounds it didn’t take long for things to get better. While they floundered at first they eventually got it right and I would say by 1998 3d games came into their own. That makes Little Ralph’s release a bit of an anomaly in 1999. This accomplished little gem would not have stood out against titles like Metal Gear Solid or Soul Reaver but that doesn’t make it any less great. As a reminder of what made games like Actraiser classic and just on its own merits the adventures of little Ralph is an amazing adventure for anyone that loves platformers.

The story is a little bit interesting. A village is under attack and Ralph, an unknown warrior, is doing his best to protect the townsfolk. Unfortunately the leader of the monsters casts a spell that turns Ralph into a child. Before they can finish off Ralph a woman steps in to save his life. The demons don’t care however and pull a Double Dragon, leaving little Ralph to find some clothes and rescue his savior.

At its core the mechanics are as simple as can be. You have a standard sword slash but can also charge it up to send enemies flying to bowl over their compatriots. Even the few power-ups keep it simple. You can collect two kinds of sword upgrades, one to increase its range and another to shoot fireballs. You also get a little white……I don’t know what the hell it is but the little bastard supplements your attacks with bombs of his own.

Little Ralph doesn’t try to wow you with revolutionary gameplay but instead through tight level design that makes excellent use of your skills. The game is filled with all sorts of clever platforming challenges along the lines of the Donkey Kong Country series with trap filled mine cart chases, collapsing platforms, and nailing multiple enemies in sequence to progress. You’ll visit a wide variety of locations like British castles, Egyptian pyramids, sewers, and even take to the sky. Almost every stage has multiple paths, an easier higher path that takes skill to reach or the low road which has more enemies and tougher platforming challenges. It’s nice to be able to somewhat tailor the game to your level of skill.

Just when you think the game has shown you all of its cards about halfway through a new element is introduced as it becomes a full fledged fighting game during boss battles. Ralph returns to his normal form temporarily and gains a full complement of special moves executed by Capcom style button combos. These are a nice distraction and change of pace although you shouldn’t go into it expecting a deep combo system.

Don’t let the beautiful aesthetics fool you as this is probably more difficult than many of the games we grew up on. This is the kind of game where every jump is measured and enemy placement is meticulously planned out. Ralph moves at a brisk clip and it is tempting to stay on the move but guarantees a swift death as enemies spawn everywhere. This is the type of game that will place items within reach to entice you into jumping early or forgetting to keep your hand on the attack button only to die because a shark hit you in midair and I Iove it. That being said I do think single hit deaths are a bit harsh. The optional shield that will absorb one hit doesn’t start to show up until the game’s midpoint which makes the early stages a brutal game of trial and error. Even a simple three hit life bar would have done wonders to ease the difficulty but that is just my personal gripe. Infinite continues make this more than manageable if frustrating.

I would have loved to have seen this get a worldwide release but I’m sure Punky Skunk failing to light up the charts scared publishers off. It doesn’t matter though as the game is import friendly. The only problem will be finding it as the game is rare but worth it. To that I say good luck.