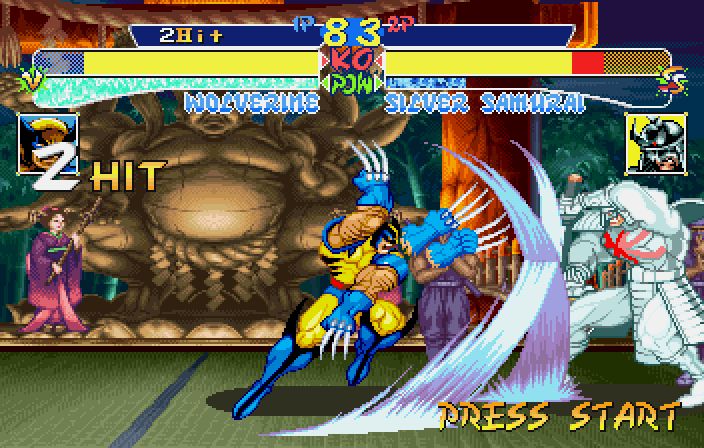 As a lifelong comic book fan seeing my favorite characters take to the streets and engage in fisticuffs was a dream come true. And with Capcom doing the honors there was little to fear. X-Men: Children of the Atom was an awesome game when released in the arcade in 1994 and its home ports would have been welcome if they were a bit timelier. The Saturn version didn’t hit until close to 1997 and the pathetic PS One game wouldn’t see day light until 1998. In that time the genre had not only moved forward but the quality of arcade conversions did as well with many games going above and beyond to even improve on the original game. This home port is adequate but a bit bare bones and while still a good game also faced stiff competition.

X-Men: Children of the Atom in many ways can be viewed as the progenitor of the later versus games seeing as almost the entire game’s roster would later go on to co-star in such games as X-Men vs Street Fighter and Marvel vs. Capcom. Christ even Omega Red, a character most have never heard of got a lot of mileage to say nothing of how broken Sentinel would later become. It offers many of the same features that gamers were familiar while at the same time introducing many elements that would be used throughout many of Capcom’s future games. Although the port was a bit old at the time of release it was still impressive. At least on the Saturn.

The roster does a good job of mixing fan favorite characters along with a few oddball choices. There would have been riots in the streets if Wolverine and Cyclops were not included and they are the go to choice for beginners. Cyclops is the game’s Ryu and surprisingly there is no Ken surrogate. Ice Man, Psylocke, Storm, and Colossus round out the good guys with a motley assortment of villains rounding it out. A Sentinel (a Mark V at that) is included and would go on to be drastically overpowered in later games. Spiral and Omega Red are odd choices but their move sets make for some interesting play styles. Silver Samurai is probably the oddest inclusion as he isn’t as popular as some of the villains they could have used like Apocalypse or Mr. Sinister. Magneto and Juggernaut are reserved as bosses and certainly live up to the title.

Veterans of most standard fighting games will be able to jump right in as this uses the familiar six button setup of 3 punches and 3 kicks. The standard Street Fighter style button combinations apply making this even more accessible. COTA brought a host of additions to the genre such as super jumps (which I’ve never been a fan of) and dash rolls. The move list for most of the characters is pretty small however the game makes up for it by allowing you to control the direction of many special attacks and a very free form combo system. Special moves can be chained together at the end of standard combos and throws for a few extra hits and it isn’t uncommon to see combo strings of 7-10 hits once you learn the system. The X-power gauge is essentially a super meter that can be used in two ways: one for an X-attack which only consumes a small chunk and second for a Hyper X-attack, a devastating move that consumes the whole bar and might as well be an automatic win button because it is so cheap.

The AI is aggressive even on the default setting but most won’t have trouble working their way through arcade mode. Extras are a bit light: the bosses are playable with a code as well as Akuma who surprisingly doesn’t look out of place. There are a variety of extra modes such as group battle and survival to extend the game’s life but compared to arcade conversions like Tekken 2 and Soul Blade this pales in comparison.

At the time of its release COTA was simply incredible. The animation, even when compared to titles like Capcom’s own Darkstalkers was in another league and was joined by multi-storied backdrops that sometimes changed 3 or 4 times during a single match. The sprite work was really something else as both Juggernaut and Sentinel were larger than any other fighting game characters to date. Most of these sprites would be recycled well into the next millennium, for good and for worse. Cramming all of this splendor into the Saturn’s meager ram would have been impossible but the developers have done a good job of keeping it somewhat close. What is left is still a visual feast for the eyes that shows off the Saturn’s prowess with 2d.

The PlayStation version in comparison is a complete abomination. It didn’t take long for most of us to assume that most ports of 2d fighting games would suffer on the PlayStation but this version of the game is atrocious. There is significant loss of frames in animation, sometimes hovering close to 50%. Beyond just the beautiful artwork and backdrops Children of the Atom had astounding animation surpassing even later games from Capcom but you won’t find that here. And the load times are completely unacceptable. You can’t blame it on the platform either; Capcom did a fantastic job with the various versions of Street Fighter Alpha but developer Probe (the fine folks behind the Genesis ports of Mortal Kombat 1 & 2). This version of the game released four years after the arcade at which point I doubt anyone even cared anymore and this was the result. Sad.

Considering the original arcade release was in 1994 it’s amazing that the game was still impressive in 1996 when the Saturn port was released. Despite the various games in the “series” that introduced various gameplay elements Children of the Atom still has a unique feel of its own. That being said however I would say this falls lower on the totem of fighting games for the system no matter how well it turned out due to strong competition.