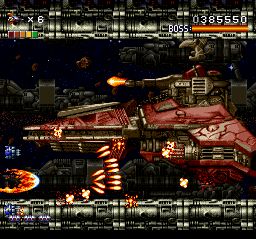 Whenever Rendering Ranger: R2 is mentioned the first topic of discussion is its exorbitant price. With a low print run due to its late release in Japan the game can sometimes run well over a thousand dollars. It’s insane that any game can ever sell for that much but the mystique surrounding RR is something else. With Manfred Trenz, one of the designers behind Turrican at the helm its pedigree can’t be denied. But I don’t think anyone expected the game to be such a graphical tour de force. Rendering Ranger backs up its ridiculous technical accomplishments with excellent gameplay and if you can find it for a decent price buy it as soon as possible.

Make no mistake Rendering Ranger is a Turrican game in almost everything but name. The protagonist is different but those who are familiar with the later action oriented games in the series will find the side scrolling segments here to be very similar. However the levels are strictly action focused, ditching the wide open exploratory nature of those games. In that regard Rendering Ranger most resembles Super Turrican 2 but on steroids if you can believe it. The split between Contra style action and shooter segments does make the game feel wholly separate in my opinion.

This is a game of two halves with both sides given equal billing. The side scrolling levels are just like Contra. The four weapons cover the usual staples: red spread, Blue spear, green rebound, and the yellow pulse. The names are self-explanatory with the exception of the yellow pulse which fires in almost every direction at once. Unlike most action games you keep all of your weapons when picked up and can switch at any time. In fact knowing when to switch is absolutely crucial to making any headway in the game. Certain weapons perform better against different bosses to say nothing about taking out enemies from a distance. You’ll also need to abuse the game’s bomb system as boss battles run a bit too long. Bombs regenerate after use and differ by weapon. Hoarding them is flat out stupid as the system is devised for constant use.

Once you take to the sky things change. The weapons carry over and are also joined by satellites (or options). Although this isn’t a dedicated shooter it’s still probably some of the most intense shooting action on the system. At its most frantic the game will throw 20-30 enemies at once with no break in between and it never slows down. Ever. This isn’t a nonstop thrill however as the levels vary their pacing consistently. I like that the levels scroll in every direction as it presents unique challenges for the genre. It does get a bit cheap once the game asks you to navigate tight corridors and mazes at far too great a speed. Sequences like this feel like they were designed specifically to sap your extra lives but maybe that’s just me.

Throughout all of these trials and tribulations prepare to see your SNES do things you never thought possible. I don’t think it is an exaggeration to say that this is one of the most technically accomplished games of that era. This really could pass for a Saturn game. The pre-rendered graphics are simply amazing, calling to mind Donkey Kong Country but with even more detail as the sprites are higher resolution. Nearly every level is filled with jaw dropping moments that will have you scrambling to replay the game just to experience it all over again. Stage 7 features a dizzying city raid that scrolls both left and right at a rapid fire pace as an innumerable fleet of ships attack at every turn. The use of Mode 7 and rotating sprites can seem a bit gratuitous at times but when the experience is this incredible I wouldn’t blame the developers for going even more over the top.

A lavish amount of attention was garnished on both sides of the game with the shooter levels coming across as even more impressive since there is never a hint of slowdown no matter how hectic the game gets. And trust me it borders on insanity at times. There are maybe 2 or three times you’ll see some flicker and all things considered I’m flabbergasted that it isn’t worse. The soundtrack is suitably excellent; Manfred Trenz pulls out a score that is reminiscent of Turrican yet still unique. There’s some deep bass going on that you don’t normally hear out of the SNES while still managing to sound symphonic.

To see all of the game’s visual splendor however you are going to have to work for it or cheat as the game is brutally difficult. You only have 3,5, or 7 lives to see the game through to its conclusion and they drain pretty fast. Even with passwords you’ll be hard pressed to make it a few levels in without running out of lives. As much as I like the weapons they feel woefully underpowered in the face of the massive bullet sponge bosses. This is the type of game where dying removes any enhancements to your currently selected weapon and it is very possible to lose everything, at which point you might as well start over. The later levels are especially cheap as they descend into navigating mazes with little margin for error and multiple boss rushes. The difficulty is a massive impediment but not a deal breaker; far from it. But if the game were more balanced it would have been classic.

Even if you were to judge the game by its individual parts it would still be fantastic. When taken as a whole Rendering Ranger is a phenomenal game and one of the best action titles of the 16-bit era. The only problem is finding it; the game was severely undershipped with few copies in circulation. The few times it does show up for sale the game runs in the hundreds or sometimes well over a thousand dollars. Your best bet is to buy a reproduction cart as paying that much for a game is simply retarded. If you love action games than you absolutely will not regret buying Rendering Ranger: R2.