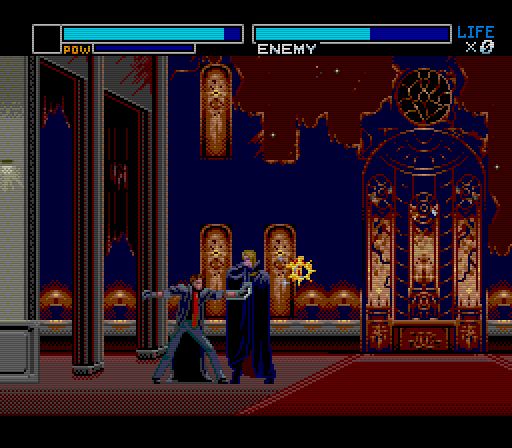 When Rondo of Blood was passed over for a US release I was dismayed to say the least. As one of the lone Turbo Grafx owners in my neighborhood it was supposed to be the game that justified owning the damn system in the first place (at least in my mind) but it simply wasn’t meant to be. Let’s ignore the fact that I sure as hell didn’t have the three or four hundred dollars needed to play it if Konami did release it here at the time. Action titles like Dracula X weren’t in great supply on the Duo so any game in that vein got my attention and Renny Blaster seemed set to scratch the itch Rondo had left many years ago. But ultimately the game is an expensive letdown and only slightly above average.

As a late PC Engine CD release in 1995 Renny Blaster commands a high price as it is difficult to find due to a low print run. Unfortunately it is definitely not worth the hundreds of dollars it commands on the aftermarket. Despite its slick cut scenes and at times enjoyable gameplay the game suffers from a bit of an identity crisis as it can’t decide whether it wants to be a straight up brawler or the Castlevania inspired action game its art and graphics would suggest. While decent overall you can spend the exorbitant amounts of money the game goes for buying multiple similar and better titles on the same platform.

Renny Blaster initially gives off the impression of a Castlevania style adventure but is in fact more of a beat em up in the vein of Double Dragon or Streets of Rage. The two protagonists differ wildly in terms of their move set and abilities, to the point where playing as each is a radically different experience. Fujiro utilizes hand to hand techniques to dispatch enemies while Seishiro has numerous spells for long range combat. To sort of balance it out Seishiro is physically weaker but his ranged attacks still manage to make the game far easier for beginners.

You’ll have to get used to the controls as the buttons are reversed but once you’ve gotten over that bit of stupidity its fairly easy to pull off the numerous attacks at your disposal. Using simple button combinations will enable different moves and spells and the variety is pretty large for a brawler. In addition by holding down the attack button you can charge up one of three elemental attacks that are pretty devastating. The cool thing is aside from the charge time you can spam them as much as you want! New spells are learned through scrolls found throughout the game with the option to switch them around between levels; some trial and error is required here due to the language barrier.

While Renny Blaster starts out as a well accomplished brawler there is a sudden shift in tone and design about a quarter of the way through that is unnecessary and hurts the game overall. The city streets and airports of its early stages give way to gothic cathedrals, clock towers and castles that wouldn’t look out of place in a certain Konami series. The ill-advised swerve in that direction also means the enemies change to follow suit and the combat system is clearly not set up for you to deal with enemies brandishing weapons. If you are using Fujiro be prepared for much aggravation since you’ll have to take damage to get in range to deal punishment. As Seishiro your attacks deal little damage and have such a long wind up that most enemies will simply block. There’s usually one attack that each enemy is susceptible to but be prepared to chip away at these bastards for a while towards the end. There’s also some light platforming that, while inoffensive, seems really out of place in the game.

I don’t know why the tonal shift happened but it leaves the game feeling like the generic clone its art suggests rather than the inspired beat em up it starts out as. The game would have turned out far better if it stayed the course with an even difficulty curve as stronger enemies are introduced. As it is it will remind you of the far better games that it obviously drew inspiration from.

Regardless of my frustration with the reversed controls the game overall is insanely easy. Most enemies barely inflict any damage with their hits allowing you to ascertain the best attack to take them out easily. Most levels aren’t heavily populated so combat is minimal. Health restoring food is usually placed after the challenging bouts with the more troublesome enemies, not that you’ll need it. The game conveniently refills your life bar after moving on to the next level segment. The mid and end level boss battles are the only areas that put up a fight but can be brute forced provided you have extra lives as you respawn immediately. The whole game can be completed in a little over an hour but with four endings decided by your choice of characters through the game there is some slight replay value but not much.

Visually the game is uneven and definitely does not seem like a late era release for the platform. The art itself is well done with incredibly detailed backgrounds although the lack of any scrolling is really inexcusable considering the system was in its twilight years. There’s a noted shift in the game’s tone as the environments become more gothic and derivative of Castlevania with the enemies following suit. The sprite work leaves something to be desired as the animation on enemies is stilted. The lengthy cut scenes feature exquisite art that looks fantastic although there is no animation aside from slow pans of the camera. The soundtrack is also excellent, full of creepy macabre tunes that set the appropriate mood. There’s an extensive amount of voiced dialogue that unfortunately is lost on non-Japanese speakers.

Good production values however do not make a good game however. Renny Blaster has some interesting gameplay ideas that are executed well but unfortunately the game itself is not good enough to support them. If the game were significantly cheaper maybe I could recommend it but the exorbitant price you’ll need to pay to own it means you are better off playing something else like Kaze Kiri or Rondo of Blood.