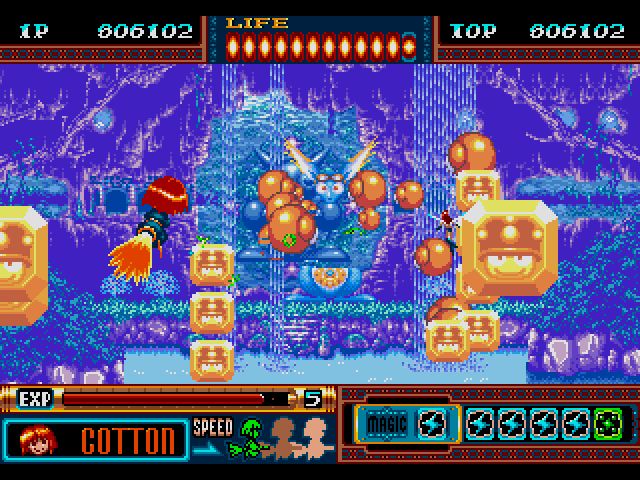 It was commonly accepted as fact that the Genesis simply was no good at scaling sprites without the Sega CD. Early titles such as Super Thunder Blade and the sad port of Galaxy Force 2 were choppy disasters while later games such as Dick Vitale’s Awesome Baby Basketball and Red Zone showed that it could be done competently. Meanwhile Mode 7 was used in SNES games like it was going out of style. Fitting then that probably the most impressive example of that entire generation would be a little known Genesis game in Japan known as Panorama Cotton. PC belongs in the same conversation as Vectorman and Sonic 3d Blast as games that nearly broke the system. All of the technical wizardry in this case is backed up with a game that is awesome but really expensive.

Beyond anything else Panorama Cotton is technically brilliant, to a degree that I would say makes it one of the best achievements of the 16-bit era. The game makes excellent use of scaling sprites like Space Harrier but is far smoother than that game could dream of. The backgrounds suffer from pixelization but are still clear enough that it barely matters. All of the technical finesse is married with beautiful art direction that brings the magical world of Cotton alive in a way we’d never imagined as the levels twist and turn in ways most games of this type avoided. This truly pushed the system to its limits and really showed what the hardware was capable of.

Cotton’s primary weapon is her magic shot which starts out weak but is upgraded through experience up to five levels. At each level it becomes more powerful and covers a wider arc however taking hits actually decreases your xp and can potentially downgrade your power. There is some nuance when it comes to rapid fire; holding down the button will produce a consistent stream but also makes Silk rotate around Cotton for a magic attack and stop your stream. Learning the timing of how long to hold the button and doing a quick release to keep the momentum going is key, especially in the later stages of the game where absolute chaos reigns from the start.

Shooting down groups of enemies will release gold bars that represent one of the three different elemental spells you can keep in stock. By shooting these bars three times you can change the color to gain a different spell, all of which have unique ranges and effects. To take it a step further by holding the attack button Silky will orbit Cotton, at which point using a spell will modify it for a new effect. Tricky to perform in the heat of battle but devastating when used correctly.

From a design standpoint this is the antithesis to every other game in the series. Whereas every other Cotton title moves at a measured pace Panorama Cotton is a blindingly fast epic journey. This is probably one of the fastest paced shooters for the system, with enemies and obstacles all streaming in at fast clip. At times the game might be a little too fast as there are times when walls and such open or close too quickly for you to react. But having said that I can’t picture the game any other way. The game’s breakneck pace never lets up as it moves from one set piece to the next and the visual variety as well as the new sets of enemies on every level go a long way towards keeping the game fresh throughout. Moments of calm where you can actually take your hand off the attack button are fleeting and brief and while that should be overbearing over a length of time it seems appropriate here.

Maximizing your point bonuses, be it through shooting parts of the environment or going ape shit during the tea time bonus after boss battles is key since there is no other way to restore health than score. Occasionally Cotton will roll after taking a hit when low on health; this negates any damage but is only randomly triggered. You only have one life and limited continues to complete the game but the game’s checkpoints are evenly spaced and the game even retains your attack level, experience, and magic! The viewpoint makes judging the angle of bullets and enemies troublesome but most will not have a problem completing the game in short order, ironically because the game itself is short.

The one big negative would be the game’s length. At only five chapters the game can be completed in about an hour and a half which is standard for most shooters. However as much as I don’t like to factor in a game’s price it can’t be avoided here. For the $1-200 you’ll most likely pay you’ll certainly enjoy the experience while it lasts and play through the game more than once just to ogle the graphics and amazing art direction. There’s also a cool bonus mode where you can play through the game as Silk with Cotton as your support “fairy”. It’s interesting since she has a smaller hit box but not a significantly different experience. One or two more levels would really have made this phenomenal.

Unfortunately this is one of the most expensive Genesis games ever as it suffered from a small print run. Shooter fans will more than get their money’s worth if they manage to track it down; to that all I can say is good luck! The game is excellent but not worth the potentially hundreds (yes, hundreds) it goes for; to that I say get a reproduction cart. This desperately needs to be re-released somehow.