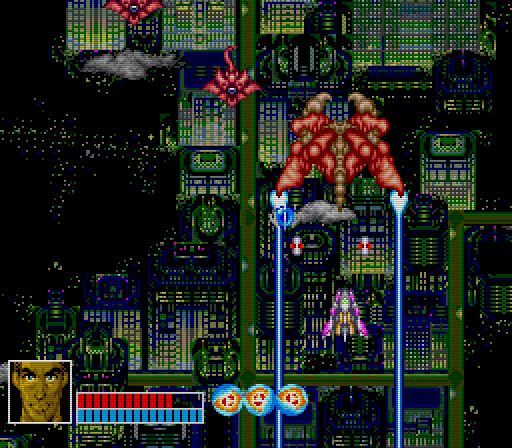 Psychic Storm was a game I bought blindly years ago after only seeing a few sparse screenshots and thinking the name was cool. Once upon a time I had more money than common sense but in this case it didn’t bite me in the ass. This is a pretty good game that only suffers due to the heavy competition in its genre on the system. Considering Psychic Storm is cheaper than the majority of those better titles it serves as a worthy substitute if you don’t like pricey imports and is a good game in its own right.

In the distant future Earth is under attack by a race of insectoid aliens who devour the planets in their path and integrate them into their bodies. The planet’s last hope of survival lies in the hands of four brave pilots, each with their own unique ship patterned after the very same aliens destroying the planet. It is up to you to guide Alex, Charr, Joe, and Nastasia with their Stormbringer ships and save the world.

Each character comes with their own unique set of weapons with half the fun coming from choosing the right hero for each level. Alex is your basic shooter hero with a standard Vulcan cannon and missiles. Joe is my favorite; his hellfire is strong plus his nuclear spread missiles explode on impact and linger for a second or two. Charr is the most disappointing which sucks as his weapons look cool. The psycho shell is the strongest but has the shortest range plus his missiles suck. Nastasia doesn’t fit into any particular niche. The ion laser is similar to the hellfire but smaller but her missiles aren’t as good. A separate bar automatically charges and allows you to also unleash a special attack when full.

What makes each ship special is its ability to transform. Each Stormbringer has a unique insect form that features massively increased firepower and a unique form of attack. Alex’s ship turns into a giant butterfly that releases waves of fire from its wings. Joe turns into a scorpion that can grab enemies and charge up energy in its claws for a massive burst of force. This form lasts a short time which can be replenished by picking up special icons. It is a bit of a double edged sword since your body becomes huge but is worth it since it’s so overpowered. You only get three of these per stage but trust me it’s more than enough.

Psychic Storm tries its hardest to be an intense shooter but overall the game is pretty easy. With your life bar you can sustain 7 or 8 hits which is pretty uncommon in the genre. Technically you don’t have lives but your 3 special weapons serve the same function. When your life dips too low one is automatically used which doesn’t seem like much of a punishment considering in your powered up form you can blaze through the levels and bosses while it lasts. While I can see how someone who decided to use them early on could be screwed there isn’t much reason to until a boss fight. Even playing half seriously I still managed to breeze through half the game before I died because I chose a bad character for a particular level. Not that I’m complaining, I’ve played through my share of cruel shmups so any game that is fair in comparison is welcome in my opinion.

With the game’s laid back pace and ease of difficulty it helps that it is pretty long. Each of the seven levels is split into two halves with each running close to 10 minutes or longer. After the second round you can choose your path through the game not that it has any real bearing. The long stage length is mostly due to the pacing which is a bit slow for my tastes. Enemy waves are slow to spawn and sometimes you’ll fly for close to a minute without being attacked. Not every game needs to be a bullet hell shooter but the game could certainly use a shot of adrenaline at times.

Visually Psychic Storm has its moments but they are fleeting. The game begins on a high note with a beautiful flight over Tokyo at night, full of glittering lights and detail. But from there it’s a significant drop off with each subsequent planet featuring less exciting environments. It picks up again towards the end but still never manages to match its opening level. The one area that never disappoints would be the bosses. The antagonists are a weird assortment of insectoid creatures with the game’s mayors being the strangest of the bunch. Large, impeccably detailed and well animated these are the game’s visual highpoint. The soundtrack is a bit strange. The music is a series of symphonic arrangements that seem a bit out of place in a scrolling shooter and don’t match the action. It’s good but out of place.

Psychic Storm isn’t the greatest shooter for the Turbo Grafx but it doesn’t need to be. This is far better than some of the crap that was actually released here like Dead Moon and Deep Blue. Due to its low profile it’s also cheap by import standards. A worthwhile addition to any gamer’s library.