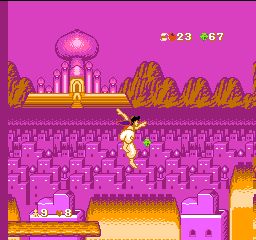 It’s always amazed me how widespread bootleg and unlicensed video games are. Even as far back as the mid to late 80s I can distinctly recall seeing one or two Chinese NES carts that somehow crammed 50 shitty games in one package. The vast majority of these games are absolutely terrible but every so often you’ll come across one that is pretty great. Virgin Games released an official version of Aladdin for the NES in Europe but it was awful. However Hummer Team, a group in China, created their own version of the game that is actually one of the most impressive for the system and absolutely shames the official release.

Unlike Virgin’s ill-advised port of the Genesis version this is actually a port of Capcom’s SNES game. The Sega game was famous for its exquisite animation that I’ll admit they valiantly tried to recreate within the NES’s limits but it was disastrous and ruined the game. The SNES game wasn’t at the same level but I’m sure presented just as much of a challenge and yet Hummer Team have done a spectacular job producing a slightly stripped down version of the game. In my opinion it’s up there with the rest of Capcom’s licensed Disney titles (for obvious reasons of course) which is high praise and well deserved.

The most striking aspect of the game is the look. Capcom did a wonderful job recreating the locations of the movie and the game has the same distinct vibrant look. The NES version is just as colorful, or as colorful as the system will allow. Much more impressive than that however are the sprites and character animation. The character sprites are some of the largest on the system and have most of the same animations that made the Super Nintendo game so great. In the latter parts of the game there is some heavy sprite flickering that gets pretty bad but that is limited to a specific level. That this level of quality came from an unlicensed game is pretty shocking as the vast majority are simple rom hacks or cheaply made.

The majority of the play mechanics have been brought over unchanged as well. Aladdin can still throw apples to stun enemies and perform a flipping toss to take them out. The timing on it is tricky and will be the cause of much frustration unfortunately. What is even more frustrating than that however is the cardinal sin of reversing the buttons; B jumps and A throws apples. Unlike say Bart vs the Space Mutants it isn’t that big of a deal here but whenever developers do this I question why. Sadly the parachute mechanic is gone but at least the levels have been redesigned so they aren’t as vertical so that its absence wouldn’t be missed.

The game follows the plot of the movie faithfully with some slight deviations just like its 16-bit big brother. The game is comprised of six levels that will take you from the streets of Aggrabah to the Cave of Wonders and finally Jaffar’s palace. The focus is on platforming and acrobatics rather than action and for the most part it nails it. Aladdin is incredibly spry even without the blanket to act as a cushion should you fail. As far as how this stacks up against the original the levels are less populated than before and have undergone some slight alterations, mostly to make up for the loss of the blanket. Only one sequence from the original has been removed, the second battle against Jaffar but it’s no great loss all things considered.

The original was noted for being incredibly easy and that carries over to this version to an extent. The game showers you in extra lives but that is mostly because you’ll need them. Most of your deaths will come from the finicky jumping controls when springing off objects. Once you’ve leapt on an object you can execute a short or high jump off it but performing either consistently is hard. By the midpoint you’ll be called on to execute these in rapid succession so it sucks that you’ll suffer some cheap deaths in what are some of the game’s high points. Aside from that however you can avoid most enemies and there are only two boss battles so combat is not an issue.

Hummer Team has done an excellent porting over Capcom’s classic nearly wholly intact. Virgin should be ashamed of that piece of crap they put their official stamp on. It’s too bad the game was unlicensed and released far too late to be marketable worldwide as it is a really cool version of a great game.