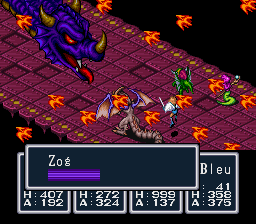 Of all the genres Capcom covered during their prolific days on the NES they had very rarely dabbled with RPGs. With the possible exceptions of Destiny of an Emperor (which is more of a strategy game) and Willow (action RPG) they seemed pretty content to more or less dominate the action category. As their first traditional RPG series Breath of Fire would go on to spawn many sequels across a variety of platforms but almost did not see a release in the US. With little experience localizing a project of this magnitude publishing duties were passed on to Square, who preserved what made the game so unique but produced a dry translation of the game’s story. In all honesty the story is not what made Breath of Fire special but its gameplay, which is still enjoyable today barring the high encounter rate.

The Light and Dark Dragon clans were once one but that peaceful existence is shattered when the Goddess Tyr appears, offering a wish to any who gain her favor. The Dragon clan descends into war, eventually splitting into two sides with the battle continuing until a lone Light dragon seals the goddess away using six keys. Thousands of years pass and the light dragons are on the verge of extinction with the Dark Dragons seeking to awaken the Goddess. The task of putting a stop to this menace once again falls on the shoulders of a light dragon as he gathers companions for the inevitable final battle.

As far as premises go Breath of Fire is fairly generic. Collecting x number of a particular item to defeat an ancient evil has been done plenty of times before and the game does little new to at least spice up that formula. The game’s localization is dry and has very little flavor in its text. Because of space limitations many names have been abbreviated or changed completely; a variable width font would have done wonders for the game.

What props up the game’s story is the world itself. Capcom had created one of the most unique fantasy worlds in gaming to that point, full of anthropomorphic species at every turn. The six clans that make up the population of the world are wildly different in look and abilities; powers that will become available to you once you start to assemble your party. The overworld and dungeons are full of areas that you can’t immediately access from the start and activities to participate in. Fishing might seem like a pointless waste of time but can yield some of the most powerful weapons and armor in the game. Hunting can alleviate the stress of buying healing items if you’re cash strapped, which actually happens at a regular pace. Revisiting old areas once you’ve acquired new party members will usually yield worthwhile items for the travel involved.

Your party members receive very little if any characterization during the course of the game; if you’ve been weaned on a steady diet of Final Fantasy titles than you’re a bit spoiled in that regard. However even without the sweeping character arcs associated with deeper RPGs the cast possesses an unexplainable charm, from Gobi’s cheapness and money obsession to Bleu’s laziness.

Almost everyone in the cast possesses an ability that you will need to use at some point. Whether it is a ploy to keep them relevant for the length of the game or not is irrelevant; some of these are really cool. Ox can break crumbling walls with his fists, Karn can pick locks, Nina gains the power to transform into a giant bird and fly, avoiding random battles (a godsend). Gobi can transform into a giant fish to access parts of the map the bird can’t land on. Mogu’s ability to dig through dirt can net some of the best weapons and armor with dig spots stretching as far back as the beginning of the game!

Aside from the translation the other issue with the game is its balance. Random battles are frequent and even with an auto battle option are still a chore to deal with. Equipment upgrades become exorbitantly expensive early on but the amounts of gold you’ll gain from battle can’t keep up. In combination with the high power of enemies in each new area you will end up spending far too much time grinding to keep pace with the game. With limited inventory space (a good chunk of which will be taken up by story items) reaching the end of the long dungeons with items to spare is the exception, not the rule. The boss fights are also tuned a bit too high. Unless you’ve spent time grinding away be prepared to see your attacks move their life bar by centimeters and not inches. Hell once you’ve depleted their life bar it’s still not over; every boss has a second wind which means the fight continues except you have no way of knowing when it will end.

The interface also has problems of its own. I’ve mentioned the inventory which can be alleviated by putting items in storage. Item names have been abbreviated which causes problems since you’ll sometimes be hard pressed to remember what the hell a SuedeCT is, who can equip it and what slot it goes in. You have no way of comparing stats on items before buying which sucks considering how expensive gear becomes later on. It sounds like I’m being harsh but this was released in 1994 (or 1993 in Japan), meaning it had to compete with Final Fantasy 6 but lacked features even FF4 had.

Graphically Breath of Fire is fairly decent. Capcom’s art direction does wonders for the game’s world and it even has a day/night cycle which affects gameplay. In combat the sprites are medium sized but feature fully animated attacks to compensate. The various spells and transformations feature some nice effects which at least makes the frequent battles visually interesting to look at.   The game’s soundtrack is amazing with many catchy tunes that wouldn’t sound out of place in Ghouls n Ghosts, not that I’m complaining.

Overall in spite of its issues Breath of Fire is still a solid RPG. For a first time effort Capcom knocked it out of the park in some areas and had room to improve in others, which they would (without some more growing pains) in future sequels.