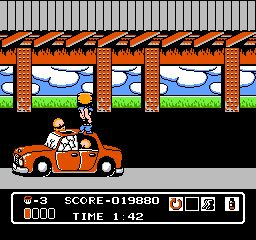 I’ve always been fascinated by Japanese games that manage to retain their heavily localized flavor when brought to the US. There was a silly notion in the early days of the industry that gamers would be turned off by anything too foreign which is why publishers went out of their way to hide the fact that the games came from Japan. It was really stupid; you could have told children of the 80s that Super Mario Bros. was made by aliens and they wouldn’t have given a damn. That aside certain series like Konami’s Goemon would skip the 8-bit era in the US entirely for that reason. Then you have titles like Hammerin Harry, an innocuous arcade release from Irem in 1990. One look at the game and you can see that it is steeped in Japanese culture and apparently it didn’t do well enough for them to bother publishing the NES port in America. It did see a release in Europe however and is an enjoyable little romp that won’t set your world on fire but is still solid.

The story is so unmistakably eighties it hurts. The Rusty Nail Construction Company bulldozes Harry’s house. Why? Because fuck you that’s why. In response Harry takes up his only possession, a large hammer, to get some civilian justice. Originally released in the arcade in 1990 while Hammerin Harry’s “theme” of a disgruntled construction worker is universal the game is heavily Japanese flavored in its presentation similar to Konami’s Mystical Ninja series. I would imagine that is why the series has largely stayed in Japan.

The NES port of Hammerin Harry isn’t an exact match to the arcade game as some stages have been shifted or outright removed while new ones take their place. Aside from a few gameplay tweaks this maintains the same spirit as the original and is an enjoyable if short-lived platformer that somehow was released everywhere but the US. Speaking of which, dear god what were they thinking with that European box art? It’s nearly up there with the original Mega Man in terms of being a ghastly misrepresentation of the game inside.

For a simple construction worker Harry is pretty bad ass. The hammer is a pretty effective weapon as it has decent reach and is large enough that hit detection isn’t a problem. It also doubles as a shield and can pound the ground to stun enemies. New to this version of the game is a life bar; no single hit deaths here although I don’t know if that is a good thing but more on that later. The one element that didn’t carry over is the ability to smack objects into enemies which sucks. There are still boxes and such lying around but they only carry the occasional power-up.

Items are few in number but incredibly strong. Chili peppers allow you to swing the hammer in a circle which is almost game breaking. The rare POW icon grants a massive hammer (seriously its comically huge!). The hard hit will absorb one hit and another new addition is a medicine bottle that restores health. If you have OCD and smash everything in sight you’ll rarely go without at least one item which does have an effect on the game’s balance.

While the power-ups are few they are extremely strong and unfortunately make the game incredibly easy. The 360 hammer means you’ll no longer have to time your swings or even aim properly. It is the most frequent and rarely will you ever be without it. The giant hammer is really cool but grossly overpowered but luckily it only appears in a one or two stages. Regular enemies are easy to deal with but even the bosses have simple patterns that you can outright ignore and spam attacks. The three hit life bar is probably the biggest contributor to the game’s ease though. The arcade game was designed around single hit deaths and while this isn’t a 1:1 conversion it still follows some of the same sensibilities.

The ease of difficulty wouldn’t be so much of an issue if the game were not so short. The game diverges from the coin op the most in terms of its levels. There are only five levels instead of six with two of them being completely original. They come at the expense of two of the arcade game’s levels which have been excised unfortunately and had they all been included this would have been a much stronger title. With 2 or 3 more levels it would have been the perfect length. It’s a lot like Panic Restaurant in that regard, another game with excellent gameplay that was also over far too soon. As it is you’ll blow through it in less than half an hour; you’ll enjoy that time but it is brief.

While the journey to take down the Rusty Nail Construction Company is brief you’ll enjoy every step of that process. Hammerin Harry is a good “loose” port of the unconventional arcade game and a solid title in its own right and makes a good second tier release once you are done with the classics of the genre.