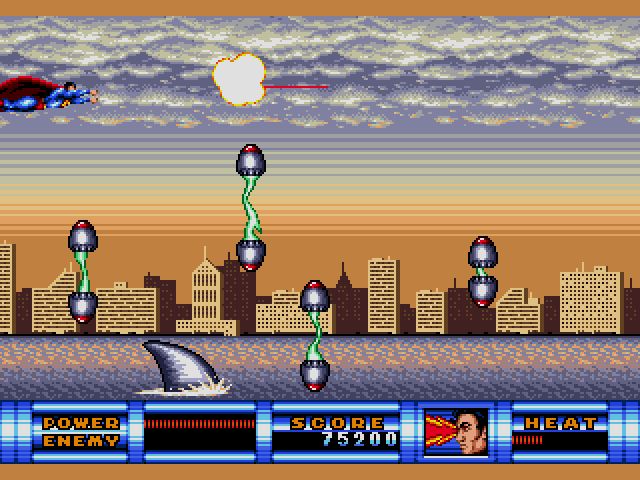 Sunsoft’s Batman was one of the first licensed games I truly fell in love with back in the day. When you’ve been exposed to a steady diet of LJN trash it’s hard not to become skeptical after a while. Yet this one little game completely my perception of what a licensed can and should be. As much as I loved their Batman games I wish they had given Superman the same treatment. This 1992 video game has been forgotten by gamers and with good reason; it’s bad. Though far from the worst game starring this character considering the pedigree of its developer it is not a stretch to say that Superman is a disappointment. The Man of Steel deserves better.

There is no overarching story to the game as each level drops you in with almost no explanation. About half way through the game Brainiac kidnaps Lois Lane for your classic save the princess moment but even then it seems haphazardly tossed in. Sunsoft didn’t exactly make very good use of the license in terms of including characters from the Superman mythos. A few villains are featured as bosses such as the Prankster and Metallo but you’ll be hard pressed to even recognize them in game. Curiously Lex Luthor isn’t part of this lineup but judging by Brainiac’s outfit this takes place during the Panic in the Sky storyline and the original Luthor is….indisposed.

In the comics Superman is one of the most powerful characters in the industry but you won’t find any evidence of that here. Forget any ideas about flying through the air and smashing bad guys left and right for the most part. This is mainly a side scrolling platformer with the emphasis on the side scrolling. Superman can only punch and kick bad guys. The large host of abilities the Man of Steel has are limited to only one at a time which is incredibly lame. This might as well star Ultra Boy from the Legion of Super Heroes. What’s even worse is that the selection of abilities is limited to just three: super punch, spin, and heat vision for the flying levels.

The game’s greatest failing is that you don’t ever feel that super. By restricting your powers so heavily the game loses any sense of identity. The most damning fact about the game is that if you remove the costume this could just as well have been a game starring any other platforming hero. Something doesn’t sit right with me when it feels more satisfying to control Aero the god damn Acrobat than the premier superhero in the world. Being relegated to simple punches and kicks for more than half the game is dreadfully boring and lame.  The few times you get to cut loose are satisfying but fleeting; I’m Superman, I want to feel powerful!

That’s not to say that an interesting game couldn’t have been built around such limitations. You can see where Sunsoft sort of tried as there are obstacles and break points that require you a specific power to pass. However these are always in the immediate vicinity. If the levels weren’t so straightforward and had multiple paths or if there were a wider selection of abilities this could have been more interesting. As it is you’ll wonder why they even bothered. The second half of the game is essentially a shooter as you chase Brainiac and Lois Lane into space. It’s a change of pace and nothing overly spectacular but at least it breaks up the monotony.

The common complaint about Superman as a character is that he is too indestructible which makes his stories boring. You won’t be able to make any of those complaints here as the game is also excruciatingly difficult. The Man of Steel might as well be made of tissue paper as he takes large amounts of damage from some of the weakest enemies in the video game world. Not just because Superman is a gimp compared to the enemies you’ll face but also because non-powered items are rare. Health power-ups are sparse so you’ll be dying pretty frequently. You have exactly one life and two continues to complete the game and I’ll tell you right now that isn’t happening.

Why is it so hard to make a good game starring this character? From the Atari 2600 to the Xbox 360 Superman has been in some dreadful games with this ranking in the middle of the pack. There are few redeeming qualities to be found; you are better off looking elsewhere for your superhero fix.