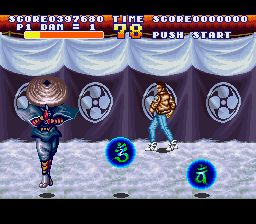 Sengoku was one of those Neo Geo games I always wanted to play in the arcade but because it occupied a spot in a four slot MVS unit that had Samurai Shodown it almost never happened. The one or two times I finally did get to play it I found a pretty good brawler that didn’t set the genre on fire but offered a few nice features that set it apart. I looked forward to the SNES port by Data East but it mysteriously never came out. It was probably for the best as this mostly only shares the same name and theme as SNK’s quarter muncher and is not as good.

Centuries ago two samurai defeated a tyrannical warlord but not before he vows to return in the future. In the present day that time has come and the task falls Dan and Bill, descendants of the two samurai to stop this ancient invasion. The story may be the same but in terms of content the Super Nintendo version of Sengoku only shares a loose theme. That doesn’t mean the game couldn’t be good; to be fair Sengoku wasn’t exactly a notable Neo Geo release in the first place. But the developers could certainly have done a much better job creating an “original” title using its framework.

Is a bit odd to take note of but there are some significant changes made to the gameplay to bring it more in line with beat em up standards. The majority of enemies in the coin op died in a single hit which is why they didn’t bother with life bars. It also meant you couldn’t unleash the standard punch, punch, punch combos or even take advantage of some of your other techniques. That has been changed so that the game more closely resembles Final Fight. With tougher enemies the various weapons have a greater emphasis. Unlike your typical brawler weapons aren’t lost if you are hit and last a decent amount of time. Not only are they strong but the can be upgraded to unleash various devastating projectiles. These power-ups also work in concert with your various forms.

Sengoku’s sole defining feature are its transformations. Due to the samurai invasion our protagonists can invoke the spirits of the past. You can assume the form of a samurai with a long range sword, a spry ninja or for some god forsaken reason a wolf/dog hybrid that is useless. Seriously, why would you want to nip at an opponent’s ankles and get kicked in the face repeatedly? In the arcade these transformation could be triggered at will so long as you collected the corresponding orb but here it is immediate. The transformation lasts a brief period and is almost game breaking considering how quickly you can mop the floor with bad guys. Despite the change the orbs drop frequently enough that you’ll spend a considerable amount of each stage in a different form.

The level setup is both different and strange. After clearing a few round of enemies you will be teleported to a rift where the ancient samurai forces come from. These are long successions of enemies usually capped off with a mini boss battle before you are teleported back. This happens a few times per level and while it is different it isn’t particularly notable. That is because it is boring; regardless of setting you are still fighting the same groups of thugs in different arrangements and numbers. If unique enemies existed in these spaces it would have gone a long way toward making the game stand out.

While I won’t go so far as to say the game is easy it isn’t nearly as brutal as some titles in the genre. Although the game throws waves of 3-4 enemies at once it rarely feels overwhelming. That is mainly because power-ups are doled out regularly and you won’t spend as much time without a weapon or transformation. Despite lasting a brief moment with a weapon in hand or any form aside from the stupid dog you’ll clear the screen in seconds. Scoring is pretty generous and you’ll gain at least one extra life per level. I was almost able to clear this on one credit without putting in a real effort.

That being said however no matter how easy I found it the game is heavily repetitive, more so than is usual for the genre. Enemy variety is limited per level and so you’ll fight the same 3 types in 4 waves at a time. They try to keep things fresh by introducing at least one new opponent per level but that simply means they are cycled in to the rotation along with 2 other clowns. Combine that with your limited move set and it becomes tiresome by the third level. This isn’t the longest game in the world at six levels but with the number of enemies thrown at you in rapid succession it certainly feels like it.

While I was disappointed to find that this isn’t a direct port of the arcade game I was also willing to accept it for what it is if it were good. Between the repetition and subpar graphics however this version of Sengoku is strictly average and not worth your time when there are better games in the genre to buy.