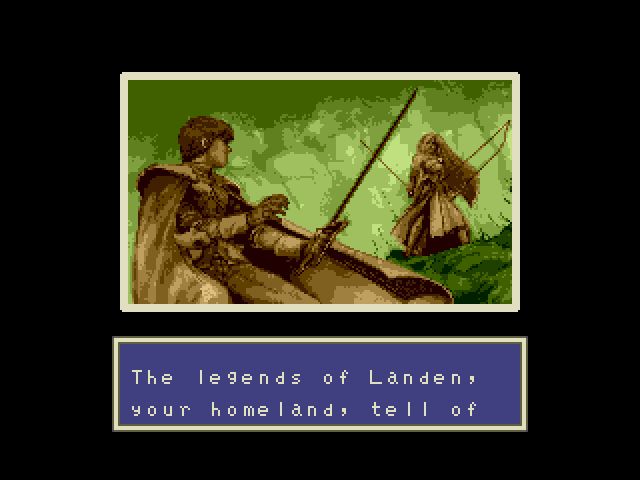 And now we’ve come to the black sheep of the family. Many volumes of vitriol has been written about the missteps Sega took with Phantasy Star III, most of it true. Coming off the success of the seminal second installment one would think a sequel containing all of the elements that game got right would follow. Well in the end what we got was something……different and while I can respect them for not resting on their laurels what they created is as far from the conventions of the Phantasy Star series as you can get. There are some good ideas buried underneath the game’s lackluster execution but I doubt most will stick around long enough to bother.

Long ago war between the Orakians and the Layans rocked the planet but ended when the leaders of both factions disappeared. All communication between the two sides collapses as they evolved in different ways, with the Orakians relying on technology and Layans taking up magic. Rhys, the prince of Orakia, is set to marry Maia when she is taking by a Layan demon. With war threatening to erupt again Rhys vows to take her back and sets out on his journey.

While Phantasy Star III has many issues its greatest feature would be the Generations referred to in the title. Though the quest begins with Rhys it isn’t long before his leg of the journey is over and he is presented with a choice from two possible future wives. The offspring produced in these unions will inherit traits from their parents, informing their abilities. This generational shift happens twice, ultimately leading to four different protagonists for the final showdown with Dark Force.

The concept of future generations continuing the fight their parents started is an interesting one and the game does a good job of making each quest somewhat unique for each one. All roads will eventually lead to the same place but the events leading up to it is what makes replaying the game unique. I’m surprised at the lack of game’s that utilized this storytelling technique in some capacity and despite its faults Phantasy Star III is the game that introduced it to the world.

If the game didn’t say Phantasy Star on the cover you would never associate it with the series upon first impression. The world presented in PS III is more medieval fantasy rather than the hard sci-fi of prior installments. In fact were it not for the cyborgs and traveling between the individual ships that make up each world you would never know this takes place in the future. In a way it harkens back to the original Phantasy Star but It’s such a radical departure from the heavily anime influenced second game that it’s too jarring to fit. The US instruction manual tries to rationalize it by having it take place concurrently with part four but that only makes it worse.

The traditional setting goes hand in hand with the game’s mechanics. You visit towns, fight monsters, and explore the various dungeons throughout albeit very slowly. The pacing of the game is very methodical and not in a good way. Random battles come frequently and your characters walk maddeningly slow, always a recipe for controller throwing rage. Rather than separate planets the entirety of PS III takes place on a colony of seven ring worlds linked by tunnels that you’ll unfortunately have to trudge through each time. It’s certainly distinctive but due to the game’s art style there is little variation from one world to the next.

The battle system returns to the first person view of the original game but doesn’t seem to move any faster than that game. While the attack animations have somehow regressed in the years between their releases they are just as slow and plodding. For those that can’t stand the repetition inherit of turn based combat there is an auto battle function for the times you don’t feel like clicking through menus. Magic has been given a slight tweak; only characters who have some Layan blood can use the series typical techniques and in addition they can be powered up in towns. Depending on the generation your decisions has led to relying on magic might not be an option, making the game harder as a result.

For as much as I like the generation system the game’s plodding pace completely saps any will to want to explore each possible generational shift. Even by RPG standards of the time Phantasy Star III is slow. You walk slow, random battles are slow even on the highest setting, and simply getting from point A to B is a laborious task. Combat is frequent with as many as 6-8 enemies becoming the norm about a quarter of the way in. Unfortunately there is no teleportation spell or stations so you have to trek through every dungeon or cave again if the story calls for it. Honestly this isn’t a long game; each generation is only about 5 hours or so of content but the obvious padding makes it feel longer. By the time you make it to the final group if you’ve lasted that long you’ll simply want it to be over.

As I mentioned previously the more realistic art style simply doesn’t work the animeish character design. The game heavily recycles its few assets; despite their being seven worlds most are simply palette swaps of the same generic template. About 90% of the dungeons use the same metallic background with no changes other than the layout. The amazing battle animations from the first two games is almost completely gone; in its place is the most bare ass minimum that is so pathetic they shouldn’t have even bothered. When you see a massive titan whose means of attack is to wiggle a finger you know they simply didn’t’ care. About the only bright spot in the presentation is the soundtrack.

I’ll give Sega points for not shoving out another generic sequel after the success of Phantasy Star II but that doesn’t mean the game is compelling in any way. Phantasy Star III is a case of good ideas but bad execution and while some might grow to like it I can’t recommend it in goof faith.