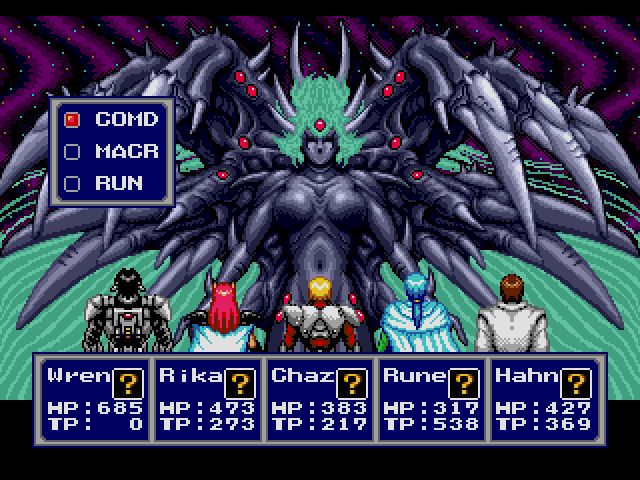 All good things must come to an end and it’s with this axiom in mind that the Phantasy Star team created possibly the series finest hour, Phantasy Star IV. Such was the damage caused by the third installment’s lack of quality that there for a while it looked as though that would be the series final installment which would have been a sad end to such a storied franchise. But when given the green light the team realized this would be there last shot and so poured all there resources into creating a sprawling adventure that pays homage to past games, answers all lingering questions, and wraps it up in a satisfying manner. Phantasy Star IV is one of the greatest RPGS of the 16-bit era and one that anyone with even a passing interest in sci-fi RPGs should seek out.

A thousand yeas have passed since the end of Phantasy Star II and the lush green fields of Motavia have given way to ever expanding deserts after an event called the Great Collapse. With this comes an increase in biomonsters leading to the creation of hunters who specialize in exterminating them. Two such hunters, Alys and Chaz will unwittingly become caught up in the machinations of the evil Zio and his master, an ancient evil that threatens the Algol Star system once again.

Phantasy Star IV pulls in elements from every prior game in the series to create one last sprawling adventure that spans multiple planets. For long term fans of the series there are numerous cameo appearances and bits of fan service that leave me impressed at just how thorough they were in crafting this epic. The fact that they not only acknowledge Phantasy Star III but manages to tie it in with the rest of the series despite its drastically different tone is a testament to this team’s skill.

The plot is far more character driven than in prior installments with nearly everyone, including the party members who are only with you a short time seeing some form of growth. Chaz begins the game a wide eyed rookie hunter but certain events force him to grow up fast and shoulder the responsibility of saving the universe. Rika is a source of never ending elation as she sees the outside world and all it has to offer with her own eyes rather than what she was taught by a computer. Rune’s ribbing of Chaz hides a deep seated burden as he is the bearer of ancient knowledge and power. The coolest aspect of Generation of Doom, its introduction of cyborgs continues as you’ll come across many during the course of your journey, most specifically Wren. The overall plot is nothing revolutionary however it is well done as mysteries unfold at a regular clip with the game doing a very good job of answering all questions that arise during your quest.

Gameplay wise there are no revolutionary features to speak of, just more conveniences. The lethargic walking speed has been increased enabling your party to literally zip through towns and more importantly dungeons. While random battles still occur a little too frequently for my tastes at least you can walk more than 4 steps before the next battle. The nightmarish dungeons full of warp pads and pits that needed to be explored has been toned down thankfully. The dungeons aren’t as complex but can still be confusing mazes to navigate that can be completed in a reasonable time frame. The talk feature starts a party conversation that will remind you of the most recent events and what your current objective is. The individual party loot system has been replaced with a universal inventory that makes it easier to keep track of item

Battles return to the third person view of the second game and move at a faster clip. Issuing commands through the icon based system is instantly familiar and all of the spells from prior games return. The weird ass naming convention for Techniques (PS equivalent of magic) returns so if you aren’t familiar with this system you’ll need to consult a FAQ or make your own. Each character has a secondary list of skills that have limited uses but are just as powerful as magic, especially when combined. Like Chronotrigger you can combine your powers to create devastating spells. Unfortunately you’ll have to figure them out on your own as the game will never tell you or keep track. The other major addition to the battle system aside from vehicular combat would be macros.

Macros function as a programmable series of commands you can use in lieu of giving out orders to each party member every turn. The game comes with a preset macro that will auto attack just to give you an idea how much they value your time. With the ability to save up to 10 macros combat is a literal breeze if there are certain actions or spells you tend to rely on. Once you out level an area these become a god send in getting you back to the world map.

The difficulty curve is far smoother than in the brutal Phantasy Star 2. There are very few instances where you’ll need to grind for progression, mostly because the encounter rate is so high that you’ll generally be within the right range provided you don’t constantly run from battle, which is actually possible this time around. Dungeons are more compact and as a result there are more of them. That’s not to say the game doesn’t have its fair share of nightmarish mazes to navigate; the Air Castle and Zio’s Fort will make you tear your hair out. But compared to the four dams in Phantasy Star 2 my blood pressure is a lot more stable.

Graphically this is one of the most beautiful games ever released for the Genesis. Forget the overly realistic fantasy style of Generations of Doom as the game is more in line the with anime style of its more popular second installment. The overworld is more colorful and slightly more detailed but it’s in combat that the game flexes its muscles. The art is top class and the enemy animation is particularly well done; remember it wasn’t until Dragon Quest 6 and Final Fantasy’s 7th installment that they even bothered animating enemy attacks. The spell effects aren’t over the top and are rather subdued with the exception of combination techniques which look spectacular.

Important story events are narrated using comic book style panels and they look fantastic. While not at the level of Sega CD cutscenes they still do an excellent job of moving the story forward and there are a ton of them. It makes me wonder why there weren’t more RPGS (hell games in general) that experimented with this storytelling format as it seemed a good fit for cartridge based games.

For fans of the traditional Phantasy Star series End of the Millennium is everything you expected and more and is the ultimate love letter to the fans from a developer. While I would have loved to see them continue the series rather than its Online spinoff I can at least rest easy knowing that this is as satisfying a conclusion as you can ever expect to a series.