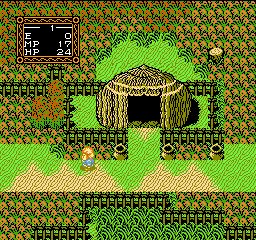 Looking back Capcom were one of the few developers who shied away from movie licenses. Other licenses such as Disney were fair game but the realm of Hollywood was left to Akklaim and LJN. Their lone forays into that highly contested arena was an unlikely source, Willow. The film was a modest hit that Capcom created two games for, a little known arcade game and the much more interesting NES action RPG. There weren’t too many action RPGs for the system worth a damn in the US and Willow is one of them in spite of its few flaws.

The game’s story is only loosely based on the movie. The evil witch Bavmorda was one of two Goddesses who bestowed magic upon the people. Unfortunately Bavmorda becomes drunk with power and is now trying to rule the world. Fin Raziel, her counterpart prophesizes that a hero will rise up and defeat her; that hero is Willow.

I suppose following the movie’s plot would not have been all that interesting but the game’s first few hours are meandering and unfocused. There is next to no direction given as to where to go and your objectives and while that is par for the course for 8-bit games it is still annoying. Once it does pick up and starts to somewhat follow the movie’s plot the game becomes a lot more interesting despite its best attempts to dissuade you from continuing.

Willow wields a variety of swords throughout the game that all differ in terms of weight. Weight affects how fast they swing. With time and experience even the slowest weapons become quicker which was unique for the time. Willow has two forms of attack, a wide swinging arc and a stab move, most useful for dealing with the annoying skeletons. In addition most projectiles can be blocked with your shield although I’m sure gamer’s first inclination will be to dodge rather than stand still for it to work. There are a large number of spells to supplement your attacks although I rarely bothered with anything other than healing.

Willow might closely resemble Zelda but distinguishes itself by being one continuous world rather than a series of dungeons that feel separate. The world is relatively large by 8-bit standards, full of dead ends and split paths at every turn, to the point you might need to draw your own maps. That goes doubly so for the dungeons. I’m the type of moron that can wander around the same six rooms for an hour and Willow’s caves have certainly stumped me due to their size. For those that take the time to explore there are plenty of equipment upgrades to find among its numerous dead ends and such.

While large dungeons are certainly nice in theory the truth is they are boring here due to a lack of any kind of puzzles or anything that would entice you into exploring. Puzzles aren’t a requirement of course but they help break up the monotony of constant combat, something this game could definitely have used. Wandering around the same mass of corridors and floors isn’t terribly interesting when there are few enemies to spice it up. This is taken to the extreme once you reach the East and West Towers, which are nothing more than the same four screens repeated to create up to six floors.

The scarcity of enemies creates a heavy inbalance in the game, leading to some of the most aggravating grinding I’ve had to undertake in a game. Most enemies only give 20-40 experience and by level 6 you need thousands for each level. That leads to going back to the same screen to kill the same skulls or undead enemies for hours to move on. It’s not even a guarantee whether the enemies will even spawn or not. By the game’s midpoint I was only level 7 and it was definitely apparent that I was under leveled. There are a few important events that require you to be at a certain level to complete; good luck mustering the will to kill the same enemy for 15-20 minutes to gain a single level.

In spite of my grievances with the game I definitely still had fun with it. Capcom have done a damn good job of expanding the brief glimpse of the world seen in the movie and when it all works it’s incredibly fun. Combat especially noteworthy as each enemy has to be dealt in different ways. Even ignoring the grinding the game is of decent length and once the main thrust of the quest is presented the story is well presented.

The production values are also another reason to continue. The graphics are excellent; every environment is exquisitely drawn and exhibits a level of detail uncommon for games on the system. One nice touch is the sudden background animation whenever you are attacked by enemies. The enemy design is unique with some of the larger beasts being particularly impressive. The one downside to this is that enemies and certain background elements are palette swapped excessively to pad it out. The soundtrack is similarly fantastic and shifts in tone depending on the moment.

Willow has held up better than most of the action RPGs on the NES although certain elements have aged badly. It is not only one of the platforms best RPGs, it’s also one of its better movie licensed games as well.