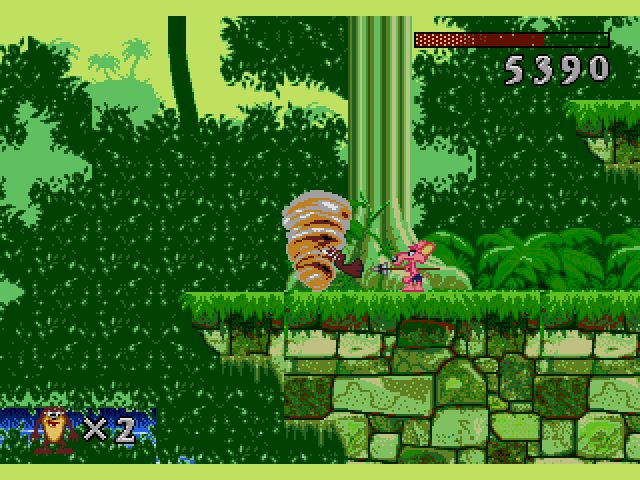 Of all of the Looney Tunes characters I am genuinely surprised that the Tazmanian devil exploded in popularity in the early 90s. The cartoon series ran for a number of years and would eventually lead to a slew of loosely based games. The Genesis version, produced by Sega and Recreational Brainware is probably the most popular and was definitely one of Sega’s biggest releases that year. This was heavily promoted on TV and I certainly don’t blame them. But for all of its marketing Taz-Mania isn’t a particularly good game.

One day Taz’s father Hugh tells the family an interesting story about a race of giant seagulls that once inhabited the Tazmanian islands and the eggs they produced, eggs so large they could feed a family of devils for over a year. Being the greedy bastard he is Taz sets out to find these eggs in hopes of a delicious meal.

Taz is known for two particular traits: his voracious appetite and his temper which usually leads to his signature tornado. Taz can eat nearly everything in the game, the copious amounts of food littering the levels, bombs, and even enemies. Hell you can even eat the extra lives and continue boxes. Obviously food restores health but bombs are almost always instant death. The spin is incredibly powerful, allowing you to mow your way through just about anything unscathed. Unless you are incredibly careful Taz will eat everything directly in his path, including bombs and the game has a habit of hiding these behind background objects. Chili peppers give you the ability to breathe fire for brief periods. The platform staple butt bounce is here but the game’s hit detection makes it unreliable.

While the game has a solid set of mechanics the controls has its share of problems. The controls are loose with Taz feeling stiff once in the air. The spin move is wild like it should be but also finicky to handle once you start to move. Collision is spotty so anytime platforming is involved it becomes a crapshoot as to whether or not the game will recognize that you’ve landed on a ledge. The levels that see you hopping from log to log are a nightmare because of this. Despite these issues the few boss battles are incredibly easy by comparison.

As a result of the game’s myriad issues it is incredibly difficult. Well not so much difficult as frustrating. . The level design is a bit of a mess with far too many leaps of faith needed to ascertain where to go. Two of the worst levels in the game take place in the mines. There’s a mine cart sequence that should be thrilling but instead is aggravating. By default it moves way too fast for you to keep up with incoming obstacles. You can slow down which helps but it also leaves you ill prepared for the times you’ll need speed to cross gaps. Memorizing level layouts isn’t inherently bad however when it is done this poorly it is. The following stage highlights everything wrong with the controls as you make your way through a maze of elevator shafts. There are many areas throughout that give no indication where to go and in fact towards the end there are a series of moving cages that were so spaced apart I questioned if I had missed something. Nope, and the ensuing series of leaps lead to many instant deaths due to not being able to see as much as I should have.

I will say this about the game, it looks fantastic. This was definitely one of the most visually arresting Genesis games at its release. Even more so than similar licensed games such as Castle of Illusion and Quackshot Taz-Mania resembles a cartoon come to life. To a degree the backgrounds are drawn in a minimalist style that wouldn’t have looked out of place in the cartoon series with a vivid color palette and are only let down by heavy repetition towards the end of the game. The sprites are pretty large and the animation is incredible and coming off the heels of Sonic the Hedgehog you’ll recognize more than a few similar traits here and there.

What isn’t so great is the game’s sound design. Most of the music is fairly forgettable but you won’t have time to bother listening as the game has some of the most irritating sound effects I’ve had to experience in a game. There isn’t a moment when some obnoxious sound isn’t blaring over the music whether it is Taz’s own footsteps or the sound of the generic enemies. I’m not one to mute the sound while gaming but I strongly considered it in this case, it’s that bad.

The game’s heart was in the right place but it falls flat in the execution. Taz-Mania was a pretty popular game for some god forsaken reason but it doesn’t hold up under close scrutiny.