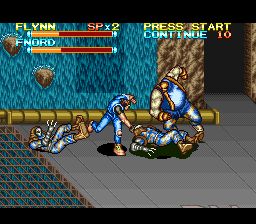 It’s funny, for as much as they are generic I still can’t help but like the Rival Turf/Rushing Beat series. While the first game was generic as all get out Brawl Brothers had a few features I genuinely liked and if it weren’t for the repetition and collision issues I would have rated it higher. The Peace Keepers is the best of the bunch, full of forward thinking ideas that most similar titles wouldn’t adapt until years later. However like Streets of Rage 3 unnecessary changes were made to the game that don’t completely ruin it but affect its quality.

Unlike most brawlers story plays heavily into the game’s proceedings and unfolds as you progress. In the year 2015 the world is still recovering from the economic wars of 2011. The DM Corporation used its vast resources to help the world get back on its feet, to the point where they have built up so much favor with the public that they essentially rule the world. Of course they aren’t as benevolent as they seem as their leader, Kulmbach Lawrencium has been conducting genetic experiments in secret. It is these experiments that bring the four protagonists together to bring them down.

The four heroes all neatly fit into the standard niches; Flynn is the well rounder, Echo is weak but fast, Prokop is the slow (inhumanly slow) but strong man and Al is somewhere between the two. The fighting engine has been greatly expanded with each character possessing a variety of techniques to further distinguish them from each other. Echo can double jump and jump off enemy heads. Al can use his bazooka for a long range attack. Prokop can carry and choke opponents a few times before tossing them aside for extra damage. There are dashing attacks and oddly enough a separate button for taunting. The taunt button might seem useless however it leads to your termination attack, of which you only get two per life. If you are fast enough you even can reverse a hold or grab although the timing of this is very particular.

Beyond the improved combat mechanics the game’s best feature are its multiple paths. At the end of every level you are presented with two choices which lead to different levels and events. There are around 11 or 12 stages altogether and you won’t play through them all in one run, prompting a huge amount of replay value. The order is randomized as well. There are plenty of secrets to find if you look hard enough, including unlocking prior series regular Norton and a reprogrammed Orbot. In addition to hidden characters everyone has a good and bad ending with specific criteria that has to be met to receive them such as saving scientists or even playing the levels in a specific order. Replay value has always been the Achilles heel of the beat em up genre and the Peace Keepers does an excellent job of rectifying that.

When the game was brought overseas a sizable number of changes were made, none for the better. Aside from the story changes the game was made more difficult although that is a bit of a misnomer. The Japanese release gave you a more than generous 30 credits which was totally unnecessary. That was cut down to 12 and while it sounds like a big cut the reality is 12 is more than enough. You would have to do something really stupid like try to play through the entire game using Prokop to actually run out of credits.

Where the series once looked contemporary and was able to keep up with its competition visually the Peace Keepers looks dated. Games like Final Fight 2, the Ninja Warriors, and especially Streets of Rage 3 were visually spectacular and looked better than many of the arcade games in the same genre at the time. To its credit the sprites are pretty large and animate smoothly but there are only a few enemy types that are recycled heavily throughout the game. Gone are the exquisitely drawn baseball stadiums and forests and in its place the Peace Keepers has mostly flat and lifeless backdrops with some ripped straight from Brawl Brothers. As part of the localization process the facial portraits throughout the game were redrawn in a more realistic style which doesn’t match the sprites at all; it’s pretty hilarious to see Echo as a child yet her portrait is a grown woman. And the game can’t decide whether Al is a black man or not.

I’d like to comment on the music however there isn’t any. That’s right, they’ve also completely removed all of the game’s music and it definitely hurts the game. The dead silence with the exception of the sound effects makes it seem as though the game is unfinished. It was a chore to completely play through the game without any mood setting music and I resorted to listening to my own just to avoid hearing the repetitive grunts and smacks. You have the option to switch to “BGM” mode but a sizable chunk of the game’s original music is missing with one of the worst songs reused for multiple stages. I don’t know what they were thinking with this change but it is stupid, no doubt about it.

I don’t want to give the impression that the game was some triple A title that was ran through the meat grinder but as the sum of its parts it was certainly better than this. The Peace Keepers is still relatively solid but what it lacks and has been changed hurts its overall quality. I would recommend the better beat em ups on the platform before settling on this.