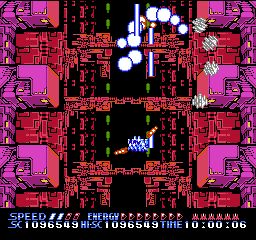 Wow, that’s all I can say. Prepare to see your NES do things you never thought possible. Recca is the fastest shooter available for the NES and moves with the speed of a Genesis title but has almost no slowdown whatsoever. I don’t know what feat of technical programming Naxat Soft used to accomplish this but it is simply incredible to see in action. And it was done without the help of extra processors or specialized mappers. When you compare it to many of those early SNES shooters such as Super R-Type and Gradius III it’s embarrassing. Summer Carnival ’92 Recca is the greatest NES shooter released, one that stretches the system’s practical boundaries and backs it up with fantastic gameplay.

The Summer Carnival in the title refers to the shooting competition Naxat held in 1992 with Recca as its entrant. Much like Hudson Soft and their Star Soldier series these competitions were based all around scoring and the game comes equipped with two and five minute scoring challenges. Score attack challenges you to earn as many points as possible in two minutes but it is Time Attack that is more interesting. Here the challenge is to score one million points as soon as possible; there’s a five minute limit that adds to the pressure. I don’t normally bother with these modes but they are incredibly fun to play around with, especially due to the game’s mechanics.

There are a wealth of weapons available; five primary and five secondary that can be powered up multiple times. These run the shmup gamut, from a five-way shot, homing shot, and laser to the standard forward Vulcan cannon. Weapon drops are frequent with every 16th enemy destroyed dropping a new one. The secondary items are pods that either circle the ship or orbit it at various angles and repeat your fire. They provide minimal protection considering the biggest concern are head on collisions rather than random fire.

The most crucial defensive move you have is actually your smart bomb. When not firing your ship will begin to charge, indicated by a growing sphere. Even at its smallest size it can absorb bullets and many larger projectiles before release. Its equal parts risk and reward as it takes 5-6 seconds to fully charge but is absolutely crucial to surviving every boss battle. The bomb itself isn’t all that powerful but will provide the time needed to charge up another, making some of the most difficult fights trivial.

It goes without saying that Recca is one of the most difficult games for the NES, let alone shooters and is up there with Battletoads and Castlevania III. It isn’t just the speed of the game that makes it so tough as it is the near relentless assault of enemies in between each boss battle. You really have to question whether it’s worth trying to snag that power-up as another wave of enemies can appear at any given moment. While the bosses might seem near impossible at times it only takes a minute of casual observation to identify their pattern. That being said it will still take quite some time before even the most seasoned gamers will see the end, especially as there are no continues which is a gigantic slap in the face.

If you somehow manage to finish the main game there is still plenty of content to be mined. Though the main “quest” is only four levels long Recca has plenty of extra modes that double the length of the game and are extremely fun in their own regard. By resetting the system you’ll gain access to essentially a Zelda style second quest which is seven levels long and is a remix of the first four areas. However these are done so well you can barely tell. Not only are the graphics suitably altered but bosses are switched around and there are even some new ones thrown in the mix.

This is the game’s hard mode, which, considering the difficulty on normal, is an understatement. If you thought normal mode was fast the pace is kicked up another notch, to the point where taking your finger off the trigger button will almost always equal instant death. The sheer number of enemies that are thrown at you is so ridiculous that on more than one occasion I could only say “are you serious?” I feel no shame in admitting that I had to tap out and cheat my way to the end. A man has to know his limits and Recca showed me mine.

But there’s more! If for some god forsaken reason you crave an even bigger challenge there’s Zanki mode. It’s the same as normal with two exceptions. You are given fifty lives, which sounds like a lot but will shrink in record time due to the enemies’ new suicide function. Every enemy destroyed will erupt in a shower of bullets, blanketing the screen in a manner befitting a bullet hell shooter except 8-bit style. This is one of the few areas slowdown will rear its head which is a bit of a reprieve all things considered. I’m not hardcore enough to soldier through this mode but anyone who likes their shooters on this side of impossible will be in heaven.

Next to Kirby’s Adventure and Gimmick Summer Carnival Recca is the most technically accomplished game for the system. There really is no comparison as it puts many 16-bit games to shame and I’m not exaggerating. No matter how manic the action gets there is no flicker and only the briefest moments of slowdown. There’s a strict sprite limit in the NES hardware yet somehow Naxat managed to get around it, creating a visual spectacle I never thought possible on this aging hardware. Artistically the game is sound and even features plenty of parallax scrolling and screen filling bosses. Aside from the limited color palette you won’t find a better looking 8-bit title. The techno soundtrack is well done despite the lacking sound channels and was actually so popular that a separate OST was released.

For the longest time Recca was exorbitantly expensive as it was released in limited quantities in Japan. Last year however it finally saw a domestic release on the 3DS virtual console for a mere $5. At that price you’d be a fool to pass up one of the greatest shooters of all time.