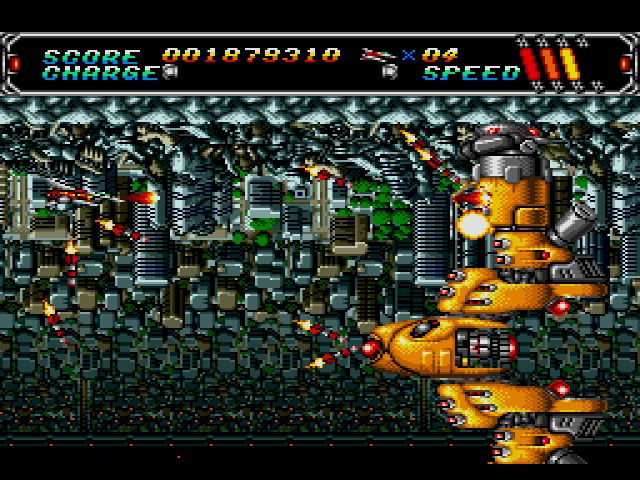 Next to the Saturn and Turbo Duo I wish the Sega CD had found some measure of success in the US. By 1995 the system had managed to build up a respectable amount of titles that made the cost (at that point anywhere between $50-100) worth it. In Japan it was a different story as the CD drive enjoyed more wide spread support. Good support too, with many incredible RPGs and such. Meanwhile Sega of America saw fit to unleash a barrage of assy FMV games on us that we did not deserve. For this reason games like Android Assault stood out more. While it isn’t the best use of the added CD space ultimately that doesn’t matter as it is a good game first and foremost.

Like a sizable chunk of the Sega CD’s library in the US there isn’t much in Android Assault that couldn’t be done on a Genesis cartridge. Aside from the fully voiced intro and soundtrack it has nothing over the likes of Lightening Force. However a game doesn’t have to be innovative to be good and in that regard AA succeeds. There weren’t too many shooters for the Sega CD and so Android Assault has little competition and despite being a little derivative it’s a solid game. More of this and less crap like Ground Zero Texas would have gone a long way toward painting the Sega CD in a more positive light.

The list of weapons is kept relatively light however the four available cover most of the popular tropes. The Thunder Cracker is the standard which upgrades to a wide spread shot at full power. The Chase Cannon fires a volley of homing missiles straight out of Macross; incredibly useful but weak. The Burning Wave is the stereotypical laser which will produce five asymmetric lasers when fully upgraded. The Satellite bombs are flat out terrible. These missiles fire in a straight line and is too slow to be effective. Once a weapon is powered up a third time your ship will transform into a flying mech which serves no purpose other than to look cool and increase the size of your hit box. That’s not true, it allows you to sustain one hit before death.

All of these weapons are supplemented by an R-Type style charge shot. When you aren’t firing it charges up to three levels pretty quickly and unleashes a modified burst of power depending on your current weapon. The changes are pretty dramatic in some cases; while the satellite bomb is terrible on its own a fully charged shot will unleash a cluster of smaller bombs that explode in a wide radius. The chase cannon actually becomes a fiery snake that lasts until the bar is depleted and particularly devastating when timed right. The fact that you have to sit defenseless for it to charge is a nice compromise for the power it offers although most will use every opportunity to spam it when possible.

This is not a fast paced game which is in stark contrast to a good portion of the shooter genre in which twitch action is its reason for being. The slower pace doesn’t mean the game is not full on tense moments however as massive humanoid robots are your most frequent opponents and they don’t go down in a single hit. The game uses the same elevated playing field as later Thunder Force and Darius games so you can easily choose a more aggressive lane if that is what you seek. But even then outside the occasional boss battle and trying to crawl back after dying you won’t find much of a challenge here.

Unlike the majority of shooters I found Android Assault to be far easier than is usual in the genre. For the most part the weapons are overpowered with the exception of the stupid satellite bomb. The charge attack reaches full power pretty quickly so you can spam it if you want with little consequence. Extra lives are awarded regularly and if you have even some modicum of flying skill you’ll have little to worry about. It does pick up a bit at the halfway mark but is nothing too drastic. As someone who is used to getting his ass kicked in these games this came as a welcome change of pace.

The game’s artwork gives it a unique visual style with its awesome mech designs. The mechs resemble something out of a mid-90s anime OVA like Tekkaman Blade or Escaflowne. Large and imposing these robots comprise the majority of the enemies you’ll face. The backgrounds are a parallax fan’s wet dream, often going as deep as six layers and makes excellent use of the system’s limited color palette. Although its environments are reminiscent of other games in the genre they are still creative and not many match this level of detail. The CD soundtrack is comprised of generally excellent rock music; hell even the little bits of voice acting are well done. The entire presentational package is a first class effort which is surprising for what was a low profile release.

While Android Assault does not break any new ground within the genre it is a well done shooter on a console that could use every quality title it can get. Copies of the game might be hard to find but generally it is inexpensive and worth a play through.