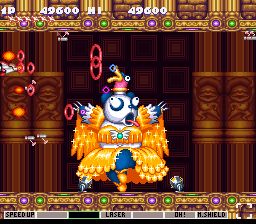 I really love examining the later games released during any console generation. Once the technology has matured and tool chains have been mastered its nothing short of miraculous what is pulled from aging hardware. Look at Vectorman and the Adventures of Batman & Robin for Genesis. Or Seiken Densetsu 3 and Donkey Kong Country 2 for SNES. Jikkyou Oshaberi Parodius can count itself among that crowd. As the last Parodius title developed for the Super Famicom it pushes the system pretty hard in numerous ways, especially in terms of speech.

The name of the game loosely translates to Live Chatting Parodius, a name in which it lives up to. A large portion of the game’s memory is dedicated to sampled speech to enable running commentary throughout the entire game. It gives the game the feel of a talk show such as Game Center CX and the like. Sadly this feature is lost on those of us that can’t speak Japanese. The commentary, while pretty cool in concept isn’t exactly crucial to the proceedings. The few phrases and such that I picked up on usually amounted to commenting on how dangerous the current situation is, warnings about the upcoming boss, and common stuff like “Watch Out”, “It’s Dangerous” or even berating you on your bad performance.

Luckily the game is still excellent regardless of whether you can understand the strange old man talking over your progress. The number of playable characters has tripled in size from its last installment to a record breaking (at the time) 16 pulled from nearly every Konami series you can think of. The majority of the new faces are Parodius originals for those that want something different. While there is some obvious doubling up of characters, such as the similarities between the Vic Viper and Lord British there are some slight differences that make a large impact such as forgoing options for a chargeable laser.

Rather than original themed stages Jikkyou Parodius instead parodies other Konami properties. Some of these are surprising and will be foreign to most; stage 2 is themed after Tokimeki Memorial, an inhumanly popular dating sim from the mid-90s. It’s certainly strange subject matter for a shooter yet somehow they make it work. The concept of fighting a pair of school girls stacked on top of each other as an end level boss fits right in with the series’ ridiculous tone.

The fun continues as even Lethal Enforcers is ripe for parody. Yes the deadly serious light gun (emphasis on gun) shooter serves as the basis for a level that combines moving targets and obstacles with the fast pace of the speed zone from Gradius II and III. While you might expect an end level boss in some way related to the series (I don’t know, a giant pistol or something?) instead you’ll face a Kabuki actor in one of the game’s more difficult encounters.

Other levels draw from Legend of the Mystical Ninja, Twinbee, disco and cooking. At only eight levels this is shorter than prior games in the series but you won’t finish it one, two, or even three sittings. There’s a battery back-up option which seems strange to include in a shooter but is literally a god send here. The only caveat is your score is reset to zero, not that most will even care. Aside from playing through the game with different characters there are 70 fairies strewn throughout the game. They are hidden pretty damn thoroughly and will take dedication to acquire them all but sadly your only reward is a stage select option.

While the main focus of the game may have changed slightly one thing that hasn’t is the difficulty. Jikkyou Parodius is absolutely brutal and unrelenting to an insane degree. This is slightly faster paced than the previous games and with that comes more aggressive enemies to match. Even the relatively brief space intermissions before each new level starts are pretty deadly. It’s definitely unexpected and with the increase in bullets and just junk littering the screen comes slowdown. Prior games were pretty good about restraining their chaos to reduce it as much as possible but here slowdown is a regular occurrence. Honestly I’m pretty sure they had the SNES ready to tap out at any moment and it sucks that the system can’t keep up. It isn’t game breaking but is notable enough to warrant mentioning.

This installment of Parodius was released in late 1995 and so benefits from years of dedicated work on the hardware. The game simply looks fantastic, with large sprites, excellent animation, and beautiful backgrounds at every turn. The series wacky sense of humor has been taken to the extreme and if you thought some of the enemies and bosses in prior games were ridiculous before its nothing compared to what Konami has cooked up here.  The SA-1 chip was included, which enables some polygonal effects here and there but is mainly used to speed up the system’s slow processor and data compression.

That compression is what allowed the game to have so many voice samples and music. There are very few games from that era that come anywhere close to this game in that regard; maybe some of the later sports games. Aside from the commentary the soundtrack is otherwise excellent, combining original compositions with funky remixes of public domain songs and other Konami hits. The sound is of a higher quality than most SNES games and doesn’t suffer from the typical muffling associated with many of its best efforts.

As one final outing for the series before it moved to the 32-bit consoles Jikkyou Oshaberi Parodius is an all-around excellent game. While its signature feature is lost to non-Japanese speakers it has little impact on the rest of this phenomenal package.