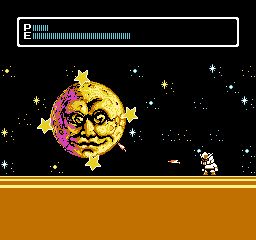 Cocoron is the type of game that was desperately needed in the US. Platform games were a dime a dozen in the US by 1991 and many of the established series were starting to churn out formulaic sequels. Meanwhile awesome new titles such as Shatterhand and Vice: Project Doom were flying under the radar. Cocoron would have immediately distinguished itself due to its lack of the one defining trait of any platformer: a main character. Rather you get to create your own and the absence of a Mario is not missed as the game is still phenomenal regardless.

The Dream World has been taken over by a mysterious assailant and the Princess Rua has been kidnapped. Tapir, a wizard from the Dream World enlists the aid of the player to help save the kingdom. Since this is the world of dreams you can be anything you want and so the game gives you the tools to envision your own hero.

The decision to forego a readymade hero and leave it in the hands of the player is Cocoron’s biggest innovation, especially for the platformer genre. The create-a-player feature allows you to build your hero in three categories: head, body, and arms (weapons). Each has eight different parts for you to choose from enabling you to assemble a wide range of just plain strange creations. You can stick the head of a Gundam on winged dragon’s body and arm him with pencils just as an example. Or give an alien the body of a sail boat with umbrellas as weapons. The choices in each category aren’t purely cosmetic as they affect a few statistics such as starting attack power, jumping ability, and your life bar. What’s cool is that you can see how your creation will perform in a mini test environment and make changes before you begin. You aren’t tied to one creation either as you have the option to make another after each boss battle however previously chosen parts become unavailable except for weapons.

What makes this feature work above all else is that no matter what weird creation you conjure up there is a base that will allow them to at the very least complete each level. How easy or hard that task becomes is entirely in your hands. While it is tempting to become attached to a particularly versatile hero there are later levels that are infinitely easier when you can say fly for a few seconds. My go to hero used a ninja head with a cyborg body and shuriken which produced a nimble badass with a lengthy life bar and high attack power. But even then I still found use for a slow moving tank with the longest life bar to who could deal with some of the tougher bosses as the shuriken are a bit limited.

The weapons are the most interesting. The eight weapons can be leveled up to five times and change considerably plus as a bonus any upgrades earned are permanent. Some I found too frustrating to use such as the crystals while others are only situationally useful. The umbrellas arcing attack is hard to time but there are one or two bosses that it makes trivial. The pencils seem like smaller and weaker throwing stars but at level three really shows its worth. The decision to allow you to still freely choose when building another character is smart as the weapons are too cool to be as restrictive as the rest of the body parts.

The world map might at first remind you of Mega Man however it works differently here. Each individual location is actually pretty short but that is because there is both an entrance and exit. Once you’ve beaten the boss at the end and choose another stage you must progress through a short exit level leading up to it. You are free to explore the map in any order and eventually will have to revisit certain areas to progress. It’s weird but extremely fluid; the exits are always tailored to your current destination with extra segments so that you aren’t necessarily treading the same ground. Despite the brevity of the stages this is not a short game. Once you’ve beaten all of the bosses there are still a few more linear stages to cap it off at the end. I would say the game is about the same length as the later Mega Man games so you get your money’s worth.

Overall the difficulty is about average. Even if you somehow manage to create a monstrosity seemingly unsuited to a given level it is still possible to manage. Although you start off weak the permanent weapon upgrades make the game exceedingly easy by the end. Every enemy drops eggs that when broken will produce life restoring hearts. You would have to really go out of your way to find a challenge in the game. Only during boss battles did I ever die and that was rare.

Developer Takeru would later go on to create Little Samson, one of the absolute best looking titles to ever hit the system. You can see traces of that technical expertise here as Cocoron is ridiculously beautiful at times. Since the entire game takes place in a world of dreams you’ll visit a range of environments with no connection to one another. The random nature of the graphical design is both a strength and a weakness; the more realistic environments such as castle interiors, forests, and a star filled sky look fantastic. The more cutesy levels such as the milk sea and the final levels seem out of place in comparison. But what they all share is a fantastic attention to detail, one that is surprising at times. The bosses especially are up there with the system’s best in my opinion. The music sadly doesn’t rise to the same level and is a mixed bag with a few stand out tracks but is mostly forgettable.

Cocoron is one of the best platformers for the NES and has been fan translated although it requires no knowledge of Japanese to enjoy. There’s no reason for any fan of platforming games to miss out on one of the most unique entries in the genre even by today’s standards.