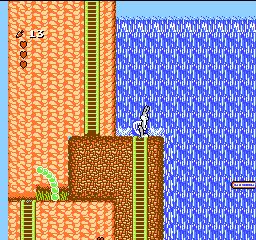 Capcom worked wonders with the Disney license for NES gamers around the world, creating some of the best platformers money could buy. No small feat considering the stiff competition. Unfortunately we were still a few years away from Sunsoft and Sega doing the same for the Looney Tunes in the 16-bit era. Interestingly enough there were only a handful of such games made for the NES, all of which were average at best and Bugs Bunny’s Birthday Blowout is among that number.

It’s Bugs Bunny’s 50th birthday and he has been sent an invitation to a birthday party held in his honor. But not everyone was invited and the jealous Toons are going to do everything in their power to keep Bugs form reaching the celebration.

For the most part if you’ve played any platformer in the last 20 years than you know what to expect. Instead of the familiar butt bounce Bugs is armed with a mallet to smash enemies over the head. It can also be used to destroy blocks and as a make shift see saw but that is about it. The carrots you collect in each level won’t give an extra life at 100 but instead chances to earn lives in the minigames after each level.

This is as bog standard a side scroller as it gets and does very little to separate itself from similar games. In fact were it not for the Acme license you could easily mistake it for something like Kid Kool or any other generic platformer. The enemies consist of a random collection of oddities such as guys with hammers for a head, clocks that explode, and what looks like walking milk cartons. You’ll be seeing these same enemies in every level for the length of the entire game too with very few new baddies spicing up the roster in later levels. At the end of each stage you face off against the likes of Daffy Duck, Sylvester, Foghorn Leghorn and the like in a vain attempt to remind you this is still a licensed product.

The level designs are relatively simple with very few hidden areas or items to collect. Once you’ve collected a carrot you can use its block as a platform and strangely you can stand on nearly any enemy’s head without taking damage. These elements could have been used for some complex and challenging scenarios and the game will occasionally show a spark of creativity but these moments are rare. The game’s simplicity and lack of challenge are exacerbated by its repetition; at six stages with four rounds each it becomes a chore to maintain interest as you face the same enemies, platforming scenarios and even bosses over and over again.

The game is ridiculously easy and super generous with extra lives; by its midpoint I had over 50 lives without even trying. That is thanks to the bingo style game you play after each round in which you only have to match three numbers in a row to gain 1-ups. Line up four and you get five lives; if by chance you line up five you get ten lives. I suppose the game was intended for the younger set and so it lavishes extra lives so as not to deter them but they could still have been lenient. It goes hand in hand with the life bar; there’s only three hearts but you can take three or four hits before one will disappear except from the strongest enemies.

The graphics are pretty ugly and reach the bare minimum to represent its characters. The sprites are pretty small and lack detail for a game released in 1990. Most of the backgrounds lack any kind of detail until the second half of the game where it picks up considerably and becomes a shade above visually bearable.  But what’s even worse is the jerky animation and scrolling. The game’s framerate is piss poor and it chugs with barely any enemies visible. The jerky scrolling interferes with the game’s controls as there is a slight delay when buttons are pressed which just comes across as lame. It’s clear this was a lazy effort on the level of a LJN game when it didn’t have to be.

There really are no redeeming qualities to this game. As platformers go it is as average as they come and is loaded with a host of technical issues for no good reason. Even if you are an Acme fan you’re better off playing one of Sunsoft’s 16-bit efforts to scratch that itch.