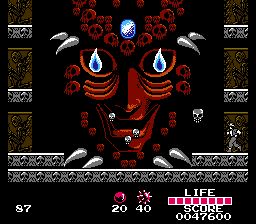 Anyone else remember looking at the bottom of your NES and wondering what that expansion port was for? I did and it wasn’t until years later that I would discover it was for the Famicom Disk System, which would never leave Japan. While that is unfortunate we did receive a sizable chunk of its more noteworthy games on cartridge such as Zelda 2, Metroid, and for some god forsaken reason Dr. Chaos. That being said there are still plenty of classics that were left behind and Almana no Kiseki is one of them. As the mutant lovechild of Bionic Commando and Indiana Jones few games of that era were anything like it and even today it still stands out.

The magical red jewel of Almana is stolen from a village by a thief, turning its inhabitants to stone. As the explorer Kaito it is up to you to recover the jewel and restore the village. Let’s get it out of the way right now, the entire premise is stolen wholesale from Indiana Jones and the Temple of Doom. Kaito even resembles Indy (or as much as he can on the NES) with his fedora and outfit. Even the numerous caves and mines you’ll explore wouldn’t look out of place in an Indy title.

But that is about the point where the similarities end. You start off with thirty throwing knives as your default weapon but will eventually pick up five more: spiked balls which can also break certain walls and floors, gems which damage everything on screen, bombs, bolas, and a pistol. While ammo is limited you can take advantage of the infinitely respawning enemies and lack of a timer to stock up.

The game’s big hook comes from its grappling hook. The grappling hook can be used at any time and is tossed at a 45 degree angle. It’s important to master its use as the default jump is too gimpy to accomplish much of anything. Once it is in place you can climb on it or jump on and off, with the only limitation being only one hook can be active at a time. While comparisons to Bionic Commando can be made the mechanic actually comes from Konami’s Roc n Rope, a 1983 arcade game that predates Capcom’s classic.

The wide open levels encourage you to experiment with grappling all over the environment to find hidden items and such. For those that don’t want to stand next to a door and potentially waste ammo trying to get more there usually are weapons lying about as well as all important extensions to your life bar. While there is only one exit in every level you can usually create your own path to it with a little ingenuity. The game’s six levels cover the tropes associated with Indiana Jones and provide plenty of opportunities to relive the best moments of his films in a different form.

The grappling hook’s implementation isn’t perfect however. To latch onto the more distant platforms you’ll have to leap and toss it but the timing needed to pull this off is frustrating to deal with. The game heavily leans on this and doesn’t have a gradual curve to ease you into grappling around the levels. I also found the default jump to be so useless that it is better to use the hook than to try and actually jump on a platform. Because the levels are so large it is often difficult to know where to go, with seemingly impossible to reach ledges ending up being the path you must follow.

When combined with the grappling hook’s quirks the game is bit more difficult than most. Although there isn’t a clock you’ll want to spend as little time as possible in a given area as enemies will respawn infinitely. Aside from the dagger and pistol the other weapons are near useless; the bombs suffer from spotty collision detection and the bolas are thrown diagonally. It’s usually more advantageous to simply run from most enemies as supplies are limited and you can never be sure when you’ll get more. Boss battles are actually significantly easier, with the only real challenge coming from actually reaching them. Their patterns are simple to figure out and they don’t take too many hits to go down.

Graphically the game is indicative of many other Konami releases from that period such as Rush n Attack and Jackal, both originally FDS releases too. The color palette is subdued and dark which is perfect since you’ll spend the majority of your time in caves, mines, and other dank passages. While the enemies are fairly generic the bosses and the backgrounds themselves are highly animated, if a bit repetitive. The soundtrack is excellent and uses the Disk System’s extra sound channels to give it a richer feel than a stock NES. My only gripe is that there are only a few songs which are recycled in later levels.

While the learning curve is a bit steep once you’ve gained a handle on the grappling hooks mechanics you’ll start to cruise through levels like a ninja. I would have preferred tighter level design to the open expanses presented but that comes down to personal preference. Almana no Kiseki would have fit right in with the rest of Konami’s US lineup and is a lost classic fans would do well to track down.