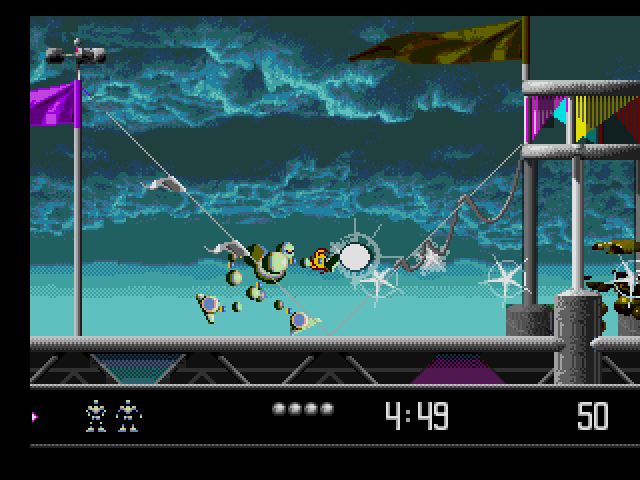 Blue Sky Software were Sega of America’s silent partner, responsible for some of the most beloved games SOA published. They were the ones behind the excellent Shadowrun, the graphically impressive but gameplay challenged Jurassic Park, and the awesome World Series Baseball. With that pedigree behind them it should come as no surprise that Vectorman was great. But the fact that it is also one of the most technically proficient games of that era is. Vectorman is one of the Genesis’s last swan songs and was only let down by a muted marketing campaign in favor of promoting the Saturn and 32X.

The future is a mess. After humanity does a fine job of making Earth a complete wasteland they leave to colonize other planets. Mechanical “Orbots” are left behind to clean up the planet for their eventual return. All goes well until Raster, a high level Orbot is attached to a malfunctioning nuclear warhead and goes insane, reprogramming all Orbots to destroy the humans when they return. The only one left to stop this menace is Vectorman, who happened to be off planet when this all occurred.

Vectorman’s primary means of offense are his power bolts which can be fired in rapid succession. In addition to these the flames kicked up by your double jump can also burn enemies. It’s pretty simple but is expanded on with numerous power-ups that alter your blasts in numerous ways. These range from a machine gun, bolo gun, and even quintuple (!) fire. Lastly Vectorman can morph into a variety of shapes such as a drill, bomb, and an aquatic form to help swim underwater.

There’s an even mix of wide open levels full of hidden secrets and more straightforward and shorter stages. There are plenty of items to collect along the way such as photons for points, extra lives but most importantly extensions to your life bar. Regardless of how much you’ll end up exploring each level the focus never shifts from combat. You’ll need a turbo controller by the midpoint as the game rarely lets up which is both a blessing and a curse. It’s engaging but can also get confusing fast as shit is blowing up left and right with crazy lighting effects all over the place, breaking the poor Genesis in the process. These moments aren’t too common however and serve as a reminder that this system is being pushed farther than anyone dreamed possible.

What truly makes Vectorman special outside of its graphics is its pacing. Every three or 4 levels the game will switch to a new viewpoint as you engage in some creative battles against Warhead that are completely different from everything else in the game. Day 2 pits you against Warhead along a railway track while Day 7 places you on a bamboo treadmill as he tries to pound you with his fists. Beyond these side diversions the game does an excellent job of doling out new forms you can morph into at an even clip. There’s always something new to look forward to right up until the game’s final moments where it ends in a final battle just as spectacular as anything else in the game.

Vectorman is tough early on when you can only sustain a few hits before death but gradually becomes easier as your life bar increases. While the game has a paucity of cheap hits due to the zoomed in view and larger sprites it is also generous with health restoring balls. The only major sticking points I ran into were the occasional boss battle where the view shifts and it isn’t immediately apparent what you are supposed to be doing.

All in all though I’m pretty sure most will be able to complete the game in a few hours despite its supposed length. The game is spread out over 16 levels or days as they are called but most can be completed in a matter of minutes with a few even faster than that. Despite this I enjoyed every moment of my time spent with the game and honestly couldn’t picture it being longer.

For as much praise that Donkey Kong Country received for its technical merits Vectorman deserves to be spoken of in the same light. Using the same prerendered techniques Vectorman excels through smart design decisions and great art design. Nearly all of the game’s sprites are composed of 3d balls which give them a smooth look and incredible animation; their individual parts are all animated separately yet form one cohesive whole. A similar technique was used in the game Ballz but that game was terrible and is best forgotten. Because the game takes place on a wasted Earth the usually darker Genesis color palette is used to great effect and at times the game even manages to overcome the system’s 64 color limitation using the system’s highlight/shadow mode.

The effects are literally unreal for a 16-bit title and still impressive even today. The way Vectorman’s shots illuminate not only his body but the environment never gets old. There’s an insane attention to detail, with particular attention paid to the shifting between light and dark in the backgrounds as well. There’s a waterfall in Day 5 composed completely of falling particles that is mind boggling to see in motion. Next to the Adventures of Batman & Robin this is probably the greatest technical achievement on the platform.

Vectorman is one of the best pure action titles for the system, no small feat considering the platform was gifted with many excellent titles in the genre. This is not a game you should pass up and luckily it has been ported in one form or another to nearly every modern game device so there is no reason to miss out.