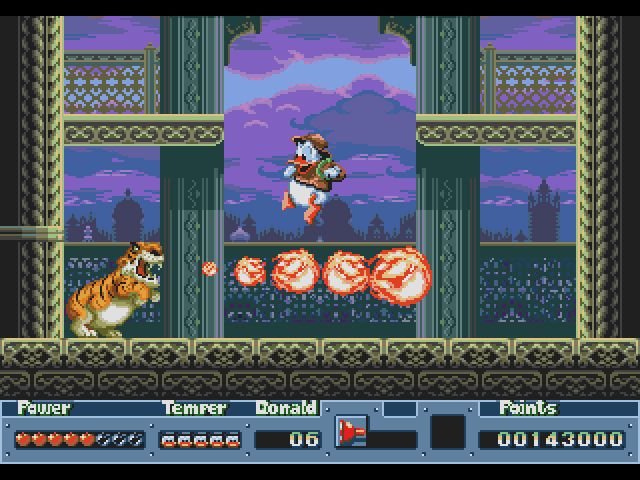 We all remember Capcom pumping out a stream of hit Disney titles during the 8-bit era followed by Virgin who also did the license proud with the likes of the Lion King and Jungle Book.  But Sega seems to be forgotten constantly when reminiscing about those halcyon days when a licensed game could be good.  With the likes of the Castle of Illusion and of course Aladdin Sega continued the tradition of Disney excellence.  One game that seems to get lost in the shuffle is Quackshot, an entertaining platformer starring Donald Duck that is usually glossed over but is one of the best licensed titles of that era.

While Uncle Scrooge is busy napping Donald uses the time to peak through his collection of books and finds a map to a hidden treasure.  With dreams of being as rich as Scrooge Donald dons his best explorer gear (a throwback to the old Carl Banks strips) and sets out to find it but not before Pete and his goons overhear his plans.

Sega’s stable of Disney games were notable for being darker and more palatable to a teen audience in terms of play mechanics than most of Capcom’s kid friendly fare.  That’s not to say that Mickey and friends are going to bust a cap in your ass; their games were more willing to put up a challenge.  It’s a fact that is evident in Quackshot’s design.   Rather than the typical platformer of the time Quackshot shares a few traits with Metroid as it has you gallivanting around the world for items needed to overcome obstacles impeding your progress and solving light puzzles.  It was a breath of fresh air when it came to these titles and allowed the game to stand the test of time beautifully.

Donald’s primary means of offense is his plunger gun.  The plungers lack power and only stun enemies for a few seconds, something you’ll have to get used to in the early going.  Most of the upgrades you’ll receive from other characters such as Goofy and Gyro will improve its functionality so that you can use them to scale walls or attach them to birds to cross gaps.  Eventually you’ll gain ammo that can actually take out enemies in the form of the popcorn shot, which is basically a spread gun, and the explosive bubble gun.  They have secondary functions as well, such as the bubble gun’s ability to destroy certain blocks.  Ammo for these more powerful armaments is limited but is replenished frequently enough that it isn’t an issue.  The last power-up available is Donald’s legendary temper; feed him six chili peppers and he’ll fly into an invincible rage that is honestly useless despite its prominence on the HUD.  Chili peppers aren’t common so activating it happens infrequently and on top of that there are no situations where it is actually necessary as a result.

The controls are pretty solid overall but there are a few quirks you’ll have to come to grips with.  Donald doesn’t run, it’s more like a waddle that isn’t fast.  It can be tricky to line up your jumps considering you aren’t building up much momentum beforehand.  He also slides a little bit before coming to a complete stop.  The slide maneuver and the areas it’s used can lead to cheap hits as you’ll stand up sometimes when you meant to keep sliding.

Rather than progressing through each level in a linear fashion Donald has access to every country after gaining the true treasure map early on.  It’s a bit deceptive in that there’s usually some obstruction that will force you to backtrack to a different country to find an upgrade or item needed for progress so in a sense you’re kind of being led down a set path.  You can visit the 10 or so countries in whatever order you choose so you at least have some control over how you tackle the game.  It matters very little in the grand scheme however as Donald will set up a convenient checkpoint that will warp you to that spot once things are in order.  Over the course of the game you’ll accrue a decent sized inventory of items such as keys, mystic staves, and clues to the puzzles in the game.  All items have a specific purpose and will be used eventually somewhere in the game, lending to the big adventure feel.

Every country is divided into two halves, its overworld and dungeon.  The overworld is usually a short bunch of platforming sequences that will inevitably lead to someone informing you of the item needed to progress and its location.  Although brief the designers have done a good job of varying each locale; Duckburg is filled with tall buildings that require the red plungers to traverse as well as zip lines for fast travel.  Mexico is heavier on the floating platforms while the South Pole is trickier with its poor footing.

The actual dungeon portions of each country ramp up the difficulty slightly since you’ll be using nearly every item and move in your repertoire to complete them.  The level design can be maze like if you aren’t paying attention but nothing that will have you tearing your hair out.  There’s some light puzzle solving to be done and there are usually clues to their solution if you’ve been paying attention.  As a whole while Quakshot tries its best to challenge you it does fall on the easy side which isn’t a crime so long as you enjoy the ride.

It’s pretty obvious Quackshot was made using the same “engine” as Castle of Illusion and matches that game’s visuals easily.  The worldwide trip leads to more varied environments and there are some pretty incredible vistas at every turn.  Mexico and the Southpole in particular sport up to six or seven layers of parallax backgrounds all scrolling smoothly.  The sprites are quite large and animated, especially Donald.  While the overall color palette is a bit dark the game still manages to look vibrant in spite of that due to careful use of colors.  For a game released in 1991 it still pares up favorably against some of the console’s finest.

Those who are expecting a 16-bit version of Ducktales will probably leave disappointed but for the rest of us Quackshot is an excellent platformer that manages to combine elements of some of the most popular games to create one entertaining package.