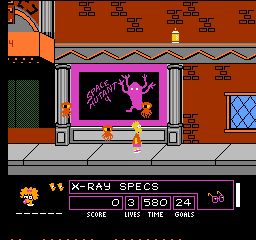 When you stop and analyze all of the releases it’s incredible that there are really only three or four actual good Simpsons games.  With the show becoming such a breakout hit after its debut I’m sure there were many potential licensors champing at the bit to exploit the license in search of a quick buck, which Acclaim more than readily did as there always at least one or two new products every year it was in their clutches.  While Konami would bless the arcade with one of the most enjoyable beat em ups of all time Bart vs. the Space Mutants only prepared us for the years of mediocrity that would follow.

Bart Simpson is the only one is Springfield who witnesses a pair of aliens as they make plans to take over the world.  Luckily for us they require a large number of purple items before their ultimate weapon is complete and with his X-ray goggles in tow Bart aims to stop them.

Judging by the amount of thought and creativity that went into the opening level of the game this seemed like it was an ambitious project.  But somewhere along the way, whether it was a sudden change in direction or budget and time constraints it devolves into a standard platformer of that era, and it’s obvious that the controls were never intended for that purpose.  This could very well have been an excellent first outing for the series but instead is remembered for its missteps.  Considering it was ported to a plethora of platforms that all suffer from the same problems its apparent something went wrong during development of the game, leaving a bad first impression.

Bart vs. the Space Mutants front loads all of its best content in its first level which is so well done in spite of the controls that it is one of the best opening levels on the NES.  The streets of Springfield are yours to explore as you go about destroying or otherwise covering up all of the painted items around the city.  You manage an adventure game style interface full of random items needed to clean up every purple item you come across.  While spray paint is enough to take care of most objects like street signs and fire hydrants there are trickier ones that require some lateral thinking.  It’s very much like A Boy & His Blob which makes sense as David Crane and Gary Kitchen both worked on that game as well.

There’s a high target list you need to pass to move on to the next level and thankfully there are so many you don’t need to clear all of them.  There are some pretty clever callbacks to episodes of the show used to enrich the gameplay.  A quick example, Moe the bartender has on a purple apron but won’t leave his bar.  If you prank call the bar (a popular element of those early seasons when Bart was the main character) he’ll become angry and chase you, giving you a brief opportunity to spray paint it.  Cherry rockets seem useless at first since you can only kill the disguised aliens but can frighten animals, like say a bird in a cage in a pet shop window (hint, hint).  There are lots of secrets you can suss out, like waiting for the clock to hit 400 and 200 seconds for a movie patron wearing purple to exit the theater or using the whistle to call Grandpa Simpson out of the retirement home for some extra coinage.  The time limit is a non-factor since it’s easy to rack up extra lives, allowing you to fully explore the city.

Now forget about all of the above once you leave the city streets.  It’s at this point that you’re objective will boil down to collecting a single item in plain view and the game changes its focus to pure platforming and it’s in this instance that  the game’s controls fail.  For some god forsaken reason the run button is also the same as jump, meaning to perform a long jump you have to briefly let go of A after building speed to leap, which never works in most cases.  That brief moment will cause you to lose enough momentum that you’ll plummet to your death frequently.  Super Mario Brothers nailed it on the first try and everyone with common sense followed suit.  How dare you to try to be a special snowflake?  The cumbersome controls worked on the first level because you weren’t asked to do anything more complicated than avoid the occasional alien but once taken out of this element there shortcomings are exposed.  What’s even worse, they kept this exact control scheme for the subsequent games that would follow on the NES.  Holy shit!

Without its cool point and click elements the only thing reminding you that this is a Simpsons game are the occasional cameos from characters from the show.  You could easily replace Bart with someone else from the second level onwards and it wouldn’t matter. Due to the terrible controls completing this five level adventure is a harrowing task, one that I doubt many will have the patience for.

Because of the game’s failings there’s no reason to ever bother playing it past the first level.  The game had the potential to be so much more but instead will have to languish in the pits of video game hell with the other terrible Simpsons games.