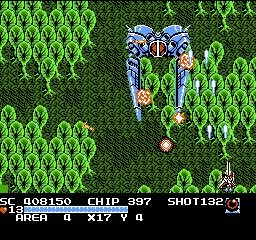 I can still remember it like it was yesterday.  Christmas of 1990 I tore through all of my presents with reckless abandon until I came upon one lone box the shape of an NES cartridge.  For most kids who grew up in the 80s you usually only received new games on Birthdays, Christmas, and the odd random holiday.  Unwrapping the box I was greeted by a pair of reptilian eyes overlooking a wasteland which basically told me nothing about the game itself.  Little did I know that the Guardian Legend would not only go on to become one of my favorite NES games of all time but one of the best for the NES period.

The Space station Naju is headed on a collision course with Earth.  A previous guardian tried but failed to destroy Naju and has left behind numerous clues in case he failed in his mission.  As the new guardian of Earth it is up to you to infiltrate Naju and destroy the ten safety devices needed to activate its self-destruct sequence before it reaches Earth.

You have to at least give Compile respect for creating elaborate back stories for nearly all of their shooters.  From the wackiness of Gun Nac to the seriousness of Zanac they at least tried to give context for your actions.  As a fusion of a traditional shooter with an action RPG the Guardian Legend’s back story is the impetus for your quest.  The numerous messages left by your predecessor are somber and speak of someone who was well aware they might fail in their mission but still cognizant enough to leave enough hints should someone else need to finish their task.  While most multi-format games suffer from an identity crisis the Guardian Legend is equally at home with its shooter mechanics and its overworld Zelda undertones, creating an adventure more than the sum of its parts.

The game is divided into two halves as you explore the five sections of Naju you control the guardian in human form from a top down perspective.  The overworld map is divided into rooms with convenient X & Y coordinates for navigation.  The primary purpose of these segments is to serve as a bridge between the Corridors that are essentially the game’s dungeons.  Most rooms will have boxes to destroy along with enemies to fight and items to collect.  While your next objective(s) are always highlighted the game leaves you some freedom to tackle them in the order you choose.

The chips you collect serve as the main focus of the game.  Chips restore life, serve as currency and also power weapons.  While the main gun starts off weak as your maximum chip energy is increased it becomes more powerful.  There are a ton of special weapons to collect that can be used in both parts of the game with all weapons governed by chip energy, even your main gun, forcing you to balance your weapon consumption.  While your primary attack is unlimited as your chip energy is depleted its power is reduced.  Your HP and chips are increased by finding Blue and Red Landers lying around or gained from defeating mini bosses.  The Guardian Legend is one of the few games where it pays to explore every dead end on the map; usually a mini boss lies in wait and one of your stats or weapons will be upgraded in turn.

Inevitably you’ll come across one of the game’s many corridors where you’ll get a taste of the second half of the game.  The pace of these shooter segments varies; some are slower paced while others are a blitzkrieg of enemies and bullets flying left and right.  The objective of each is to defeat the boss at the end and receive either a weapon or key needed to access other areas of Naju.  While the objective is simple surviving until the end of corridor is not.

Each individual area of Naju is themed and the enemies follow suit.  The Swamp region is teaming with aquatic enemies such as star fish and piranha.  The forest region ups the ante with exploding flowers full of heat seeking buds and other assorted plants.  The game has a tendency to become crowded very quickly and amazingly enough it never slows down.  While your life bar is generously long it can be depleted pretty quickly considering how densely packed each corridor eventually becomes.  Chips and other items that restore health drop from enemies frequently but don’t be surprised if you die repeatedly.

The challenge in the game is completely up to the player.   While it’s tempting to be conservative with weapon usage the reality is that later corridors are too much for the standard plasma cannon to handle.  If you want to have a sliver of a chance at even reaching each boss with a decent amount of life you’ll need to dip in that well.  Survival really does come down to choosing the right weapon for the job.  Some of the bosses in the game are practically a nightmare to contend with but with the right weapon become a cinch to beat.

The production values in the Guardian Legend are top notch.  The game descends into chaos pretty quickly at times like most Compile shooters except in this case there is no slowdown whatsoever.  Each themed area is distinct and highly detailed, especially the bosses.  While the game does make extensive use of palette swapped enemies and bosses there’s enough variety that it isn’t so repetitive.  The music as well is simply incredible, somber in tone to match the severity of your task.

Add it all up and you have one of the best NES games of all time.   The Guardian Legend excels as both a top down RPG and as a traditional shooter.  As a bonus if you enter a special password you can play through all 21 corridors in sequence, essentially giving you two games in one package.  You really can’t beat that type of value.