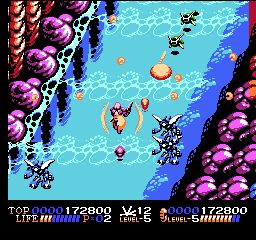 Isolated Warrior?  Join the club buddy.  Literally every video game hero is sent on a one man mission to fight the forces of evil.  Your emo tears will have to do better than that to get any sympathy from me!  In all seriousness Isolated Warrior, aside from the silly name is an excellent NES action game from the programmers at KID, developer of many a fine NES gem.  Isometric action games were rare on the platform which makes IS unique in that regard.  Despite its low profile this is a more than solid action title with excellent graphics that is up there with some of the best in the genre.

This was a game that I rarely ever saw on store shelves.  It would be nice to assume that’s because it was sold out but let’s be honest, no one was buying this.  A guy with a bowl cut in pink tights fighting aliens is not at the top of most kid’s radar as cool.  There’s something to be said for judging a book by its cover however as Isolated Warrior proves to be one of the NES best action games that no one has heard of.

The isometric perspective present in IS was not widely used up to that point; most games that shared this viewpoint were relegated to European PCs.  Zaxxon and Solstice are the only two meaning this was in pretty exclusive territory.  Enemies approach in waves similar to a shooter however there’s an equal amount of platforming involved as well.  The levels are never a straight linear path with branching segments and holes to avoid.  Typically with a ¾ view lining up shots is tricky but the weapons provided do a pretty good job of making that less of an issue.

Your two primary weapons are the Wave beam and Laser with bombs serving as supplements.  All three can be powered up considerably and have their situational uses.  The wave beam is a wide angle shot that is unimpressive initially and frankly terrible until its later stages.  As the beam evolves the angles your shots cover seem to be everywhere but the enemies.  However considering the viewpoint and speed at which the aliens move it’s excellent for destroying them without trying to line up a shot.

The Laser only fires forward but will eventually produce a back shot as well.  It’s more powerful than the wave but suffers from a narrow focus of attack.  When the bombs are upgraded they will produce an explosion of varying shapes and sizes but will downgrade a level as a result.  You can hold a sizable amount of bombs so it is best to keep them in reserve and go to town on the bosses.  Power-ups are frequent in supply so it does not take long to get up to speed, even after death.

Because the game auto scrolls you will always have to keep an out for what is coming up ahead.  Between the constant waves of enemies and the bottomless pits you’ll rarely have a moment to catch a breather.  In nearly every isometric game that involves platforming it’s terrible because the designers don’t have the common sense to realize you can’t accurately judge distance and “space”.  Here however you leap so far and high that if you see that you might have made a mistake there is enough time to correct it.  Usually you are presented with two possible areas to abscond to when platforming is called upon, further reducing the stress of lining up properly.

There are two vehicle based levels, one with a jetpack and the other while on the back of a motorcycle.  These levels are faster paced and incredibly challenging, especially level four’s motorcycle.  Trying to destroy aliens while also keeping track of the destroyed sections of road is a thrill and it all culminates in an insane boss battle among the narrow remains of what was once a city street.  For the more skilled gamers out there completing the first six levels without dying (a feat worthy of praise) will unlock one final stage and lead to the good ending.

Visually Isolated Warrior is spectacular.  The limited playing field does little to reduce the insane amount of detail lavished on each level.  You really get the sense that the invaders of have ruined the world with the amount of decrepit architecture, cracked roads, and buildings on the verge of collapse.  The bosses usually occupy a sizable chunk of the screen and exhibit a level of detail and animation not too common for the platform.  There are brief cut scenes between levels but nothing that will make Tecmo and Ninja Gaiden sweat.  Honestly in my opinion this is one of the top games for the system on a visual level but I will concede that the overly purple and green color scheme will not be to everyone’s tastes.

If you are in the market for something different among old school games and were a fan of Zaxxon Isolated Warrior is everything you could want and more.  Fans of other KID offerings like Low G Man and G.I. Joe will find a similar visual style and gameplay trappings which is good company to be in.  I can’t recommend this enough.