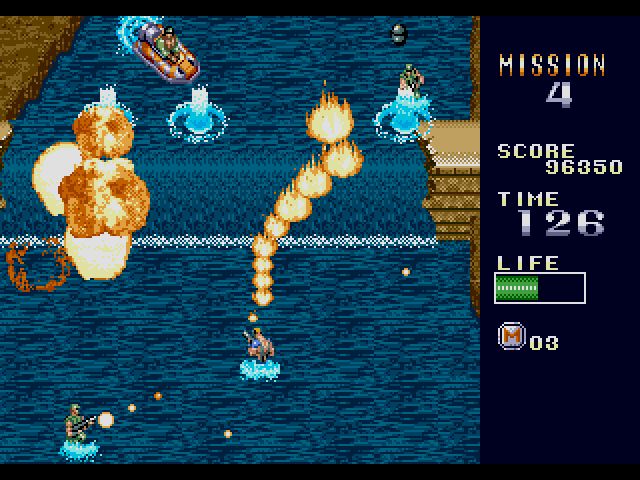 I will say this, if you loved arcade games from the late 80s and early 90s the Genesis was your best friend.  Sega had yet to create its stable of popular properties and so relied on a consistent stream of strong arcade ports to carry the platform in its early years.  Some like Super Thunderblade and Galaxy Force 2 were lacking and better reserved for more powerful hardware.  But there plenty of other hits like Strider and Capcom’s Mercs that were excellent.  Mercs was not only an excellent conversion of an enjoyable title but went a step beyond to provide players with more content, creating one of the brightest stars of those early years.

I wasn’t a big fan of the Commando (the first game in the series) as it was too simple and repetitive for my tastes.  As influential as it was to the whole overhead run and gun genre it never clicked with me, although that might be due to playing the NES port before the arcade original.  By that point my perception had already been colored and no matter which version I tried (Commando is one of the most heavily ported games ever!) it would stay that way.  Luckily that no effect on my judgment of Mercs, allowing me to see it for what it was: an excellent action game in a style that was becoming less common.

The simplest way to describe Mercs would be the overhead levels of Super C on steroids.  While it’s tempting to compare it to Ikari Warriors that game has only a fraction of the constant action on display in Mercs.  This is a much faster game featuring nimble protagonists and enemies who aren’t afraid to hunt you down.  It goes hand in hand with the tight clock that will force you to move ever onward despite the harsh opposition; it is very easy to get caught up trying to destroy a few tanks and run out the clock.  There is a noticeable drop in terrain you can use as cover but you move so fast that it generally isn’t an issue.

Mercs packs in a large selection of weaponry unlike its boring predecessor.  The standard machine gun can be powered up to produce a wider shot making it a viable option even if you’ve died and lost your weapon.  It doesn’t make the spread shot redundant however; the spread gun’s radius is even wider, more rapid and my personal favorite.  The flamethrower comes in a close second as you’ll have to manually whip it around to hit your targets but it’s oh so satisfying to watch as they burn to a crisp.  The rocket launcher has the most power but I’ve found it too slow to be effective.

Despite the generous weapon selection and copious amounts of health power-ups you’ll uncover Mercs still manages to be slightly challenging through careful enemy placement.  It’s very easy to forget about the clock when dealing with multiple tanks using a hit and run strategy and lose a life.  Continues are limited and can dry up pretty quickly when dealing with the game’s bosses.  But in the end this is still an arcade title at heart, meaning it’s a fun but brief experience that you’ll clear in an hour or two.

While the game’s arcade mode is a bit on the short side at an hour or so if you’re a competent gamer Sega saw fit to add a second campaign to the game called Original mode, a title it certainly lives up to.  You’re essentially getting two games for the price of one as this is more than just a slight variation on the arcade game; it has all new levels, gameplay features and its own story.

Original mode differs from arcade in a number of ways.  There are no continues; every merc that joins you is basically an extra life.  You can switch characters at any time, much like the NES TMNT game.  It’s a feature you’ll want to take advantage of since you can build up their movement speed and attack power through power-ups.  Each comes with their own default weapon which sounds cool but is more or less just another way of divvying up the normal game’s weapons.  Medals found in crates function as currency to be used in shops where you can health, weapon upgrades, and information for each character.  Not all of the levels are completely new; some are remixed versions of the arcade’s but in general they are different enough that they feel new.  Because you are limited to just the four guys its harder but still remains fair.  As far as the content is concerned it’s an awesome bonus that extends the life of the game.

With all of the added content Mercs would be the ideal action game package except for its one glaring flaw, the absence of multiplayer.  In the arcade the cabinets supported up to three-player coop but sadly the lack of any form of multiplayer can’t be ignored.  These types of action games are literally built for cooperative gameplay; how the game was released without it unfortunately tarnishes it as a whole.  I’m not one for coop but even I have been able to enjoy a good romp with a buddy or two by my side and that omission really stands out.  With a 2-player coop it would have pushed this into excellent territory.

The absence of the arcade’s cooperative gameplay definitely hurts but overall Mercs was still one of the best Genesis titles at the time of its release and is still enjoyable today.