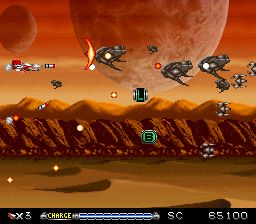 I realize I’ve reviewed quite a few shooters but the shocking truth is growing up I never actively sought them out.  Whether they were cheaper than other games or just the hot genre of the moment I don’t remember, I just know that everyone had at least one or two.  To stand out in this crowded genre required something, anything, to differentiate from your peers.  In BioMetal’s case that would be its soundtrack provided by 2 Unlimited.  That certainly helped to garner it some attention but outside of its music how was the rest of the game?

At first glance BioMetal doesn’t seem any different from most shooters with the exception of the GAM.  The GAM is BioMetal’s sole original feature and in practice it’s a very enjoyable addition to the game.  Once activated the GAM forms a shield of rotating orbs that make you invincible to everything but the heaviest of fire and head on collisions.  The shield can be used offensively in two ways, one in an expanding arc and as a projectile boomerangs you can direct that also destroys bullets in its path.  As long as there is energy the GAM will stay active until you dismiss it to recharge.  Managing the GAM is the key to survival as it is your best offensive and defensive weapon.  Taking advantage of the few quiet moments to let it recharge or only using it in brief spurts will separate the skilled players from the button mashers.

Outside of the GAM the selection of weapons is pretty small which is unusual for this genre.  You have three missile choices: straight missiles that function exactly as the name suggests, angle missiles that cover the top and bottom portions of the screen like the photon torpedoes in Gradius III and the only real option in the bunch homing missiles.

The main weapons are also limited to just three all varied in their utility and can be upgraded by collecting multiples of the same item.  The Laser is the most powerful weapon as its single shot will also pass through both enemies and walls and becomes wider when powered up.  The Spread gun covers a small arc at first but once empowered will blanket up to 80% of the screen.  The Wave beam is stronger and when upgraded is the only weapon that will fire both backwards and forward.

A small weapon selection isn’t necessarily bad however your options in BioMetal feel woefully underpowered in comparison to the opposition you’ll face.  Whether they lack punch or the enemies are really just that damn strong, you’ll end up relying on the GAM far more than should be necessary.  The Wave beam would have been more effective if it shot 3 beams instead of a single group in either direction.  The spread shot had the potential to be most useful but the lack of power can’t be ignored; stuff takes too long to die and as frequently as the bigger ships crop up they need to die fast.  The laser could have been the default choice in this regard but unfortunately for all of its power the laser simply can’t cut it as that single slow shot isn’t enough.

This is not an easy game by normal means and the lacking weapon array makes it that much more difficult.  Most levels have a steady stream of larger ships that take massive punishment before going down and the game isn’t shy about throwing two or three out at a time.  Now that I think about it there’s very little of the fodder enemies that help pad out your score for extra lives. If you’ve picked an inappropriate weapon for the challenges ahead (usually the laser) than your screwed.  The GAM recharges fast enough that you can use it in a pinch when necessary but it says something about the game’s balance when your best offensive option is to activate the shield and use it to ram enemies.

BioMetal is a bit faster paced than most SNES shooters, or at least tries to be.  The amount of bullets that can blanket the screen oftentimes rivals later arcade games from the late 90s.  That level of chaos brings with it unwanted slowdown that rivals Super R-Type if you can believe it.  The slowdown is so bad that it will affect the motion of your ship and if your GAM is recharging you’re screwed.  They could just as easily cut the number of enemies in half and the game would have been better for it as the system would actually be able to keep up.

The most notable aspect of BioMetal and the one that garnered it a bit of attention would be its soundtrack.  European dance group 2 Unlimited provided remixes of songs off their album Get Ready and in fact the title screen music is a pretty good rendition of their hit “Get Ready for this”.  The music itself is pretty good but it doesn’t fit with the style and tone of the game.  Being locked in a life or death struggle does not call for music that makes you want to get up and dance if you ask me.

Graphically the art direction leans closer to H.R. Giger rather than the typical mechanical alien ships prevalent in most shooters at the time.  The organic designs are creepy but skew a little too closely to R-Type for my tastes.  The backgrounds are a mixed bag; there’s some impressive deep scrolling going on but the organic theme and dark color palette make the later levels feel too similar.  Though derivative it’s still miles ahead of tripe like Blaze On and D-Force.

Bio Metal is a game with a few good ideas marred by sloppy execution.  Had the game been better balanced it would have been a solid entry in a genre that wasn’t overpopulated on the platform.  As it is it falls just shy of greatness.