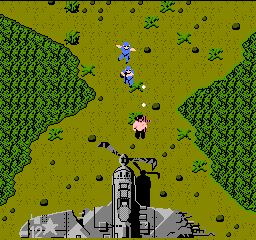 The glory days 80s, home of the big dumb action movie were a pretty glorious time.  While the cinema saw an endless list of action vehicles starring functionally retarded actors the video game world would soon see the fallout of that success.  Capcom, Konami, Data East and eventually SNK would all flood arcades with games intended to mimic those movies to varying degrees of success.  When Capcom had a hit with Commando SNK followed suit with Ikari Warriors, a series that for some god awful reason is remembered fondly.  By now you can tell I’m not a fan and this NES port certainly did not help in that regard.  This version of IW is a terrible game through and through and should be avoided at all costs.

The back and forth between Capcom and SNK has stretched as far back as the 80s and usually when the two would create competing projects in the same genre they were of comparable quality, such as Street Fighter Alpha vs. King of Fighters.  Capcom won this bout as their port of Commando is a decent game at least.  The NES port of Ikari Warriors was handled by Micronics, fine purveyor of many a hacked up NES port and suffers many of the same problems their other works have had such as insane flicker, slow frame rate and bad controls.

As the titular shirtless duo Clark and Vincent (never understood why they changed their names) as they plow through their way through the jungle to the enemy stronghold where their commanding officer is being held.  Your bullets and grenades are in limited supply but fortunately the game does a decent job of keeping you stocked.  There’s a fair amount of weapons to be had but most of it does not feel effective.  You actually have to collect a power-up to shoot long distance which is bananas to me.  The three way shot is over-powered but rare.  You can commandeer tanks and the occasional helicopter and pilot them so long as you have fuel; do everything in your power to keep the tanks as long as possible as it makes the game somewhat bearable.

Right away you’ll notice this game has problems.  The entire game seems to be moving through molasses with sluggish movement in abundance.  You walk slowly, you fire slowly, and even hopping in a tank is slow.  Alright that last one is how it should be.  The game’s lackadaisical pace can be infuriating, especially considering how speedy the enemies are.  This will be the biggest thorn in your side as they swarm in groups of 3-5 and your gimpy dude has trouble properly aiming at two of them before they are on you.

One of the oddest bits about the game and one that unfortunately ruined this port was its system of movement.  Moving in any direction other than upward would cause you to rotate in place before moving.  It worked in the arcade as cabinets made use of a rotary joystick that made rotating a fairly smooth process.  For whatever reason the developers tried to emulate this on a home console with terrible results.  Turning is an agonizingly slow process with a d-pad, one that you can’t afford when tanks and other such obstacles have a bearing on you.  As if the slow walking speed weren’t bad enough wading in water makes you even slower and there are long stretches of this.

With all of these factors working against it Ikari Warriors ends up being one of the most difficult NES games ever.  You are going to die pretty frequently, most of the time to cheap shit you can’t avoid.  Random land mines, stray bullets, and the blast radius from grenades are the main culprits.  When your tank runs out of fuel or is about to explode you can expect to die since you move too slowly to escape the radius of the explosion.  Anytime you have to enter the water you can expect to lose a few lives before it’s over.  Continuing is done through a code that you have a brief window to input after death and even then is limited.

Ikari Warriors was a decently long game in the arcade and unfortunately the home port is a victim of excess.  Rather than individual levels it was one extremely long stage that culminated in an assault on the enemy fortress and one of the strangest final boss fights of all time.  Micronics decided to make the game longer by splitting the game up into four areas.  Splitting is the wrong word, they’ve added three more stages that are each just as long as the entire arcade game itself.  By the time you’ve made it to the end of the first one alone (a grueling process, trust me) any motivation to keep going and do it all over again three more times will disappear in a heartbeat.

These new levels mostly recycle and remix the same assets which defeats the purpose of adding this supposed new content.  There are a few new enemies that end up being bigger pains in the ass then the normal blue soldiers such as the large club wielding bad elites who are all but invincible. There is a new final boss that pales in comparison to the dead alien (I swear to God) of the arcade.  I can’t completely knock the sentiment of offering new content but they should have worked on actually making the game playable first.

This wasn’t a very good game to begin with so any port was already working at a disadvantage.  The fact that it is racked with technical issues makes it that much worse and a game that is best left forgotten.  Why did publishers keep hiring Micronics?  Did they work for a six pack of beer and corn nuts or something?  I just don’t get it.