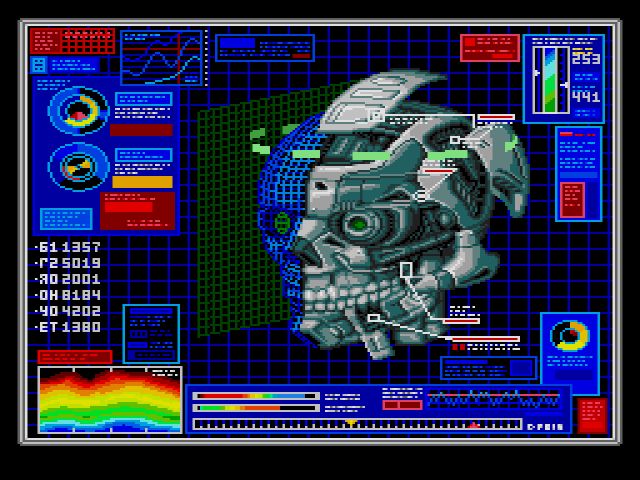 In Japan Visual Novels are the equivalent of our point and click adventure games, although they are released more frequently overseas than their US counterparts.  Focusing more on story than gathering items and solving puzzles visual novels are usually dense story wise and have branching paths such as Fate/Stay Night and Steins Gate.  As you can imagine the vast majority never make the trip overseas.  In 1994 Konami took a chance localizing one of Hideo Kojima’s finest productions and in the process created one of the best Sega CD games of all time.

June 6, 1996.  A biological weapon under development in Russia named Lucifer Alpha is accidentally released, killing 80% of Europe/Asia’s population and in turn half the world.  A decade later Lucifer Alpha mutates and becomes harmless but still leaves Chernotown inhospitable.  50 years later and a new menace threatens the population: cyborgs.  Dubbed Snatchers due to their penchant for kidnapping members of society and taking their place no one knows their origin or what their ultimate goal is.  As Gillian Seed, the newest member of the J.U.N.K.E.R task force it is up to you to solve the mystery and recover your lost memories.

From a gameplay standpoint toss aside all preconceived notions.  This is not a Lucas Arts adventure game; as a visual novel the game is more focused on telling its story.  All actions are performed using simple menu based commands.  There are both benefits and frustrations present in this system.  One of the worst aspects of PC adventure games (and everyone will agree) are the repetitious pixel hunts you were forced to engage in to find items.  It was very easy to miss crucial story items in most games of this ilk, forcing you to back track or in some cases completely start from the beginning.  Here Metal Gear will generally clue you in as to what action you should take and won’t let you leave an area until you’ve thoroughly explored it.  As a result it’s impossible to ever get stuck.  The downside is the menus are often 5-6 levels deep and there are far too many points in the game where you are forced to engage in the same repetitive action until the next plot point is triggered.  Overall it’s only a minor complaint since it frees you to enjoy the game’s plot.

What will immediately grab you with Snatcher is the world itself.  Heavily inspired by Blade Runner and the Terminator the cyberpunk atmosphere is tangible right from the start.  The city of Neo Kobe features a dazzling array of neon architecture and futuristic vehicles straight out of a science fiction novel.  Kojima has never been one to hide his Hollywood influences and they are immediately obvious. In this case however there are enough unique elements in Snatcher that make it it’s own beast.  There are also a ton of Easter eggs all over the place that are shot outs to other Konami series; the bar Outer Heaven is host to a masquerade night where its patrons cosplay as familiar Konami heroes.  Your navigator Metal Gear Mk II is a miniature version of his namesake which is extremely cool.

Since Snatcher isn’t focused on puzzles its plot takes center stage and luckily it’s a strong one.  There are plenty of unanswered questions right from the start with the mystery surrounding the Snatchers being the most compelling; why do they only appear at night time and in the winter?  Why do they hate dogs?  And why do they only snatch particular individuals?  Once you find the answers it elevates these blatant Terminator clones into more than just a loose movie homage.  The game does a very good job of providing answers to these questions and more at a reasonable clip, keeping you engaged in the plot at all times. The game’s conclusion is around an hour long and answers every lingering question you might have, dropping so many bombshells that it’s worth viewing more than once.  It’s a satisfying end to an extraordinary tale.

This was a surprisingly adult game for its time, earning a mature rating which might have led to its low sales.  It’s a rating that’s well earned as the game pulls no punches; within the first ten minutes you’ll come across a decapitated body and must examine the remains.  There are a ton of instances of bloody violence and even some slight nudity.  The conversations respect the player’s intelligence and never devolve into the juvenile hijinks so prevalent in most games of the early 90s.

Not to say that it doesn’t have its funnier moments.  Gillian is a lecher even though he is technically still married (though separated) and many of the responses available will produce comedic results.  The interplay between Gillian and Metal Gear is at the heart of the story and their relationship grows naturally as the story progresses.  Metal Gear is initially hyper critical of Gillian’s lackadaisical lifestyle but comes to respect him as he spends time with the actual human being and not just the data he was programmed with.  Gillian’s playful attitude masks a man who is hurt by the separation from his wife and the distance their lack of memories has caused in their relationship.  The cast of characters in the game is kept pretty small with nearly all of the most important figures receiving some sort of growth.

Aiding in this growth is the excellent voice work.  There isn’t as much voiced dialogue as you would expect but Konami still did an ace job hiring professionals to bring the cast to life.  The best voice acting in the world would mean nothing if the actual text their reading is shit (Castlevania: Lords of Shadow I’m looking at you!) and once again the localization crew created one of the best scripts of that era, keeping the game’s mature edge.  The game’s oppressive atmosphere is also shepherded by its dark and foreboding soundtrack.  The music gives off a constant feeling of dread, as if a Snatcher could attack at any moment.  It’s a feeling that will bristle the back of your neck when it’s time to explore any abandoned environment.  If there is one weak element to the game it would be the first person shooter segments.  The occasional moment where you’ll have to manually eliminate a target is welcome but the forced waves of enemies are out of place in a game that revels in its atmosphere.  Luckily there are only 3 or 4 of them in total.

There’s no question that Snatcher is one of the all-around best Sega CD games ever.  Unfortunately it’ll cost an exorbitant amount to play it.  Snatcher was released on a large variety of platforms however this version is the only official English edition.  While I would never advise someone to pay hundreds of dollars for a game but if you do you’re are in for one hell of a ride.