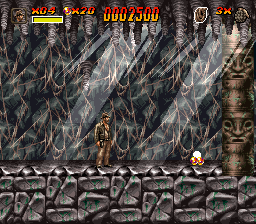 With the success of the their Star Wars trilogy of games for the Super NES it only makes sense that Lucas Arts would turn to their second biggest property as the next to receive the all-star treatment.  While they had their share of flaws that series would still serve as an excellent template for Indiana Jones Greatest Adventures, a massive package encompassing all 3 of the games in one cartridge.  Even though development was handled by Factor 5 you’ll recognize most of the gameplay beats that were lifted from Super Star Wars but there are a number of elements that allow Indiana Jones to stand out on its own.

The best way to sum up the general gameplay would be to take Han Solo from the Star Wars games, give him a whip and you’ve basically created Indy.  Granted it’s the same actor and all but the game play similarities are borderline insane.  They both fire a gun the same, leap the same and even share the same roll maneuver.  Where Han Solo relied solely on his blaster Indy is usually equipped with a whip Castlevania style.  It’s an apt comparison since Indy exhibits nearly the same level of dexterity with the whip as Simon in Castlevania IV.   The whip can be swung in most directions and to swing across gaps.  Every so often you’ll come across a pistol with limited ammo that sacrifices power for range.

All 3 movies are present and accounted for but you won’t be selecting them individually from a menu but playing each sequentially.  Each movie has a clear beginning and ending in the game and are of varying lengths.  Raiders of the Lost Ark represents a significant chunk of the game at 11 or so levels and hits nearly all of the movie’s major plot points.  The Temple of Doom and the Last Crusade are shorter at seven levels each and as such feel glossed over.  I applaud the decision to make this one massive adventure but each individual movie has enough material to base an entire game around.  I suppose the late 1994 release played a part in that decision but as it is we can only wonder what could have been.

As a whole the game does make the most of its source material with its variety in gameplay being its biggest strength.  All of your favorite moments have been recreated, such as the boulder chase, the gun vs. sword battle (still hilarious to this day) and even Indy’s fear of snakes rears its head.  With three movies to draw from you’ll visit numerous locales around the world such as Cairo, Shanghai, India, and Germany.  Not every level involves a straight path to the exit; sometimes you’ll have to avoid rising fire as you escape a burning building or navigate a maze within the Taj Mahal.  The only deviations made are for the few random boss battles but you can forgive the developers for being a little indulgent.

A few of the levels use the SNES’s Mode 7 to more accurately recreate popular scenes from the movie and these are among the most difficult in the game.  The mine cart ride from Temple of Doom will throw enemies in your path as you skate down a linear path but it’s difficult to judge their distance and position relative to your own and unfortunately it only takes one hit to die.   The controls on the rubber raft aren’t as precise as they should be but at least you can take a few hits here.  The biplane segment proves the most difficult; there is no targeting reticule so you can’t tell if you’re hits is registering until enemy fighter’s crash.  An even bigger problem would be the inability to see their bullets, meaning you won’t know you’re being hit until your life bar dips and you die.

The high challenge from these segments is a result of the game’s design and extends to the rest of the game.  There are far too many small critters such as scorpions and rats that are too small to attack forcing you to try to avoid them however they have a tendency to pop up in the midst of attacking or avoiding something else (such as a stalactite or pit of spikes), resulting in cheap hits.  Whenever there are intense platforming sequences you can count on some form of bird or bats waiting to interrupt and knock you into a pit like a Medusa head.  Speaking of Castlevania the whip lacks the snap of that game.  There was a tangible feeling of impact whenever Simon’s whip hit an object but you won’t get that here, possibly due to the limp sound effects.  It’s hard to tell when your hits are registering as a result.  It’s apparent the developers were aware of the game’s flaws as the game is quite generous with health restoring hearts but better balancing would have been better.

Factor 5 were some of the most technically accomplished creators in the industry and their 16-bit creations were just as impressive as their later 3d work.  The sprite work is superior to the Star Wars games and the backgrounds exhibit as many as 6-7 layers of parallax scrolling.  The vehicle levels run fairly smoothly and are still impressive to watch today.  In between levels digitized stills from the movie are used to drive the plot forward and through some smart compression they look fantastic.  The music is also amazing with proper renditions of John Williams epic score timed so that their looping does not feel repetitive.

When it’s all said and done Indiana Jones Greatest Adventures is an excellent companion piece to the three Star Wars games that preceded it.  With its amazing graphics and solid gameplay this is one of the better action adventure games from that era.