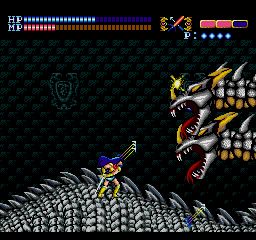 Some things are best left in the past.  Nostalgia can obscure your memory to the truth, making you fondly remember something that in all actuality was pretty terrible.  He-Man for instance was not a good cartoon no matter how badly I wish otherwise.  In my mind Valis was a kick ass action game but in reality it is strictly mediocre.  Pickings were slim early on in the Genesis life but even with that in mind I would still recommend something like El Viento over this and it came from the same publisher.

Valis – the Fantasm Soldier was originally released for the MSX and PC-88 computer in 1986 with a Famicom port a few years later.  All of these versions were terrible for one reason or another.  The Genesis remake was released in the US in 1991 by Renovation (God I miss them).  Yuko is just an ordinary high school student when she is abruptly summoned to the land of Vecanti to save them from the evil Rogles.  Valis is a side scrolling action game that is distinguished by its cut scenes, drawn in the same style as many of Renovation’s other releases.  It’s just too bad they aren’t enough to hide the fact that Valis is decidedly average in every way.

Armed with the Valis sword you control Yuko in over 10 levels of action.  There are many sword power-ups that provide different effects, with the option to further power them up 2 times.  Magic spells are awarded after every boss battle but ultimately are never necessary.  Yuko has a slide maneuver that can be used to access tricky platforms or for quick escapes.  Compared to the horrible games it spawned from, the Sega version of Valis is sound but lacks the polish that makes a true classic.

The overall pacing is plodding at best.  Yuko moves slow as molasses and even though the slide is faster you stop like a brick on any uneven terrain.  The slow pace extends to the enemies as well; most are so slow they’ll die before reaching spitting distance of you.  You have an extremely generous life bar and magic meter and power-ups to refill both are in abundance.  It would be one thing if the game was incredibly hard and they were compensating for it but it’s the exact opposite.  You will rarely die even if you are a sloppy gamer.

The graphics and music also fall into the same mediocre category.  While the levels feature some pretty snazzy art the animation is sloppy and the background scrolling is jerky; I know the MSX original had the same problem but this was a perfect opportunity to fix that flaw.  Even worse the boss fights have slowdown.  Slowdown!  In a Genesis game man!  How the fuck do you accomplish that?  The aforementioned cut scenes are okay but honestly they don’t compare to Ninja Gaiden, and that’s an NES game.  Even worse, the text scrolls slowly and will make you just skip them altogether.  If there is one bright spot it would be the well designed bosses which are the graphical highlight in spite of the slowdown.

There are too many kick butt action games for the Genesis to even give this a passing glance unless you’re looking at the terrible box art.  The Turbo CD version is vastly superior but that was not released in the US.  The sequels were vastly improved, thank god, and are definitely worth checking out.  Every series has to start somewhere, too bad Valis did not have an auspicious start.