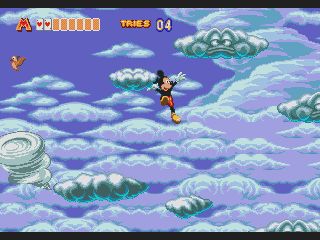 During the great mascot battle of the 16-bit era Mickey Mouse was one of the few to star in some of the most consistently excellent platformers during that period.  It’s hard to believe an icon of his stature would somehow be overlooked but considering the glut of platformers it was bound to happen to someone.  But between Sega, Capcom, and Sony Imagesoft the Mouse was done justice in the videogame space.  Sega’s Castle of Illusion was a landmark early on for the Genesis so a sequel was hotly anticipated and it lives up to expectations.

World of Illusion casts Mickey and Donald as stage magicians always on the lookout for their next big trick.  One day they discover a magical box and let their curiosity get the better of them and end up trapped in a magical world by an evil magician with no way home.   The introduction of Donald Duck livens up gameplay in a number of ways, most importantly by way of 2-player coop.  Regardless of whether you roll solo or with a friend World of Illusion features the same enjoyable gameplay as its predecessor and more and should not be missed by anyone.

There will be no butt bouncing here, thank you very much.   As either Mickey or Donald you are armed with a multipurpose magic cape that is mostly used to damage enemies or turn them into harmless objects.  The cape can also manipulate background objects, such as causing flowers to sprout.   New magic is learned after every level but for the most part these spells are only for designated situations, such as a bubble for underwater travel and manipulating playing cards to form bridges and platforms.  The controls are kept simple but the gameplay is anything but depending on your choice of hero.

Mickey Mouse is unchanged from Castle of Illusion and his route through each level is much simpler.  Consider Mickey’s quest an unofficial easy mode, which isn’t to say there aren’t any challenging spots.  But overall powerups are in more plentiful supply and his platforming segments are much less strenuous.  In addition Mickey can crawl through tighter spaces than Donald, leading to his much easier paths through the levels.

The eternally surly duck doesn’t have it so easy.  Donald Duck is for those looking for more of a challenge.  Anyone who finds the game too easy needs to give Donald a try as there are definitely points where you might sweat bullets.  All of the hallmarks of the 16-bit era are here; timed jumps, precision platforming, and risk versus reward item placement.  All this wrapped in a deceptively innocent shell.  Not to give the impression that Donald’s quest is Earthworm Jim on steroids or anything but it is more in line with the general platformers of the day in terms of difficulty.

Plug in a second controller and once again the game changes to accommodate two players.  Now the levels are populated with switches that need to be held to assist the other player as well as other teamwork activities such as lowering ropes and such to pull the other guy up or Mickey pulling Donald through tight passages.  It does a great job of extending the life of an otherwise short game and the mechanics are executed pretty well.

Castle of Illusion was a beautiful game and World of Illusion surpasses it.  Sharing a similar aesthetic the backgrounds are just as vivid and imaginative as the first game but more detailed and the animation is just as excellent the second time around.  The music is excellent with many toe tapping songs that will have you hanging around the levels a little bit longer just to let them loop.  The only negative spot on the presentation is that some of the levels cover familiar ground, such as the spider web encrusted section of the first level or the shrunken down library of the 4th level.  This is a shame since the game isn’t all that long at 5 levels with variations.

Even considering the caliber of games he starred in for that period World of Illusion is still one of Mickey’s better ventures.  It’s a bit short and easy but still worth a trip down memory lane.