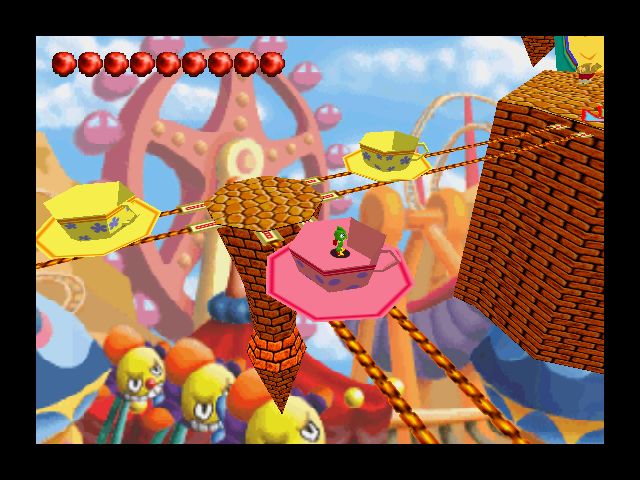 With Mario 64’s impact on the market we all knew it was only a matter of time before a legion of imitators would follow.  While most were generic trash there a few that were particularly inspired.  Chameleon Twist marked Sunsoft’s reentry as a publisher and although it did not live up to their past exploits it was certainly interesting.  It was definitely a case of gameplay over graphics as it resembled a first generation effort.  Regardless of its production values it must have sold well enough to warrant a sequel that expands on its ideas but also brings with it further complications that ruin the experience as a whole.

The story is so saccharine it almost hurts.  Davy and his pals are having fun playing on a see saw when a giant rabbit falls from the sky and lands on it, sending him to another world.  Whatever, it doesn’t need to be Shakespeare to give you an excuse to explore a new set of worlds.

Though his appearance has changed not much else has.  Davy and his friends Jack, Fred, and Linda control exactly the same as in the first game enabling veterans to jump right in.  It should be noted that character choice is purely cosmetic.  Your elongated tongue can be unfurled and controlled with the analog stick for a number of purposes.  The most common is to suck in enemies to use as ammunition (like Yoshi) but it also has many utility functions such as clinging to objects, hand stands, and even functioning as a makeshift pole vault.  The tongue mechanic is what truly makes the game and is intuitive and most of all fun to play around with.

New to the game are the vertical swing and the umbrella.  The parasol can be unfurled to slow your descent and glide across gaps.  If there’s wind in the area you can catch a ride on the updraft, a mechanic I wish saw more use.  The vertical swing is more complex as you build momentum to swing across vast distances.  Both see extensive use through the game, more so than most of the other techniques combined.  They’re both great additions and were it not for the game’s major flaw would have made the game a very solid package.

The world’s you will visit have been given a visual overhaul, eschewing the standard ice, fire, forest tropes for more varied themes.  Sky Land, Carnival Land, Ice Land, Edo Land, Toy Land, and Pyramid are far more interesting thematically than Jungle Land and Desert Land.  Well there is still an ice level but it’s awesome so you can’t really hold that against them.  At only 6 levels the game is a bit short however each is considerably long and well-paced.

With a more diverse set of themes the level design is more adventurous in scope as each covers a vast expanse before reaching its boss.  I think a bit too adventurous; it always clear which exact direction you should go and its apparent even the designers realized this as there are arrows guiding you at every turn.  You’ll have plenty of opportunities to think outside the box in order to progress past some of the game’s many obstacles and when it works the game is pretty fun.  However outside of its bosses it is still pretty easy.  I can’t see anyone struggling to complete the game in under 3 hours if they possess a modicum of skill.

Or a low tolerance for frustration.  In spite of the strides made to fix the original’s flaws the camera in Chameleon Twist 2 is so bad it nearly ruins the entire game.  You have no manual control over it and can only pan from side to side which is borderline useless.  It tries to give you the best view possible but the inability to place it over the shoulder to better line up jumps is almost game breaking.  The problems are really apparent whenever vertical swinging is involved and it sucks that a potentially cool new move is more frustrating than engaging.

The first game’s crude visuals could be excused due to its release early in the N64’s lifespan.  There is no excuse for the average presentation this time around.  With the likes of Banjo Kazooie, Spyro the Dragon and Rayman 2 on the market with stellar graphics (for the time) it’s simply unacceptable that more wasn’t done to spruce up the visuals.  The new worlds are visually more vibrant than its predecessor but still suffers from low poly counts and blurry textures.  The game does have its moments of course but the bad definitely outweighs the good.  The music is below average and grating to the point you might consider turning the volume down to avoid hearing it.  This screams first generation but it was released in 1999.

The music is bad and the graphics are ugly yet somehow Chameleon Twist 2 is still compelling on the strength of its tongue swinging mechanics.  Unfortunately it’s not enough to overcome its flaws and with better execution could have been worth checking out.