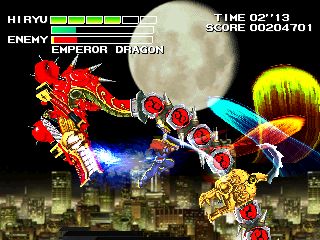 Considering he had only starred in three games (and the less said about Strider Returns the better) it’s amazing that Strider’s popularity persisted through the years.  In 1998 Strider Hiryu received a pretty bad ass redesign and appeared in the popular Marvel vs. Capcom and was introduced to a brand new audience of gamers.  Striking while the iron was hot Capcom finally produced the true sequel to the beloved original for the arcade and would later produce an excellent port to the PlayStation in 2000.  This is the sequel everyone wanted but never received.

The year 2000 would be the last great year for PlayStation software and Strider 2 was an excellent addition to that lineup before it would eventually descend into cheap $10 bargain bin hell.  While we wouldn’t see the game in its arcade form the PS One port would more than suffice and came with many extras to bolster its value proposition.  Strider 2 is an excellent action game and one of the system’s best but also could have reached classic status were it not for its brevity.

A side-scrolling action game like its predecessor Hiryu retains many of his updated moves from the various fighting games. Honestly this is one of the most agile video game characters I’ve ever had the pleasure of controlling.  The control is airtight as is needed in a game this fast paced.  Hiryu can double jump and dash in addition to all of his techniques from the first game.  When climbing walls and ceilings you can perform a thrusting jump to vault from wall to wall.  The Cipher can perform a few different slashing attacks and will produce plasma waves for a short time when using a boost.  Even his stance when standing still looks ripped straight from MVC but it all works here as the game was designed with his moveset in mind.

Though it’s still a side-scroller the game uses a mix of 3d backgrounds with 2d sprites.  A 2.5d game if you will like Pandemonium and Klonoa.  You can tackle any of the first four missions in any order before the big finale against the Grandmaster at the end.  The missions themselves cover a lot of ground, from the Grandmaster’s abandoned castle to an outpost in Antarctica.  A few of the missions are callbacks to some of the best moments from the original such as another assault on the flying airship Balrog.  The game doesn’t tread on nostalgia however and has many moments that are just as memorable.

The missions themselves are broken down into multiple shorter segments that feel more like action set pieces.  Each individual mission covers a lot of ground with its segments often featuring multiple boss battles.  It’s almost as though this were a Capcom interpretation of a Treasure game as the common fodder enemies pose little threat.  These bosses pose the game’s biggest challenge and are an absolute blast but in some ways I think they might be a little too hard.

Your life bar isn’t particularly long (although you can change that in the options) and life restoring power-ups aren’t in ready supply.  However you have infinite continues which drop you right where you left off.  It makes all the setup and elaborate boss patterns meaningless since you can essentially button mash and zerg your way through.  In the arcade this type of setup worked since you were feeding the machine quarters but at home the game becomes trivial.  The only penalty for excessive continuing is a lower grade at the end of each stage but I think most won’t give a damn.  I can’t believe I’m actually saying this but if they limited the continues it would have forced gamers to adapt and learn the mechanics and increased the replay value.

Which is the only other flaw.  For as much fun as I had the game is more or less an hour long.  To make up for this the game comes with a second disc that has an arcade perfect port of the original Strider outside of the load times.  There are bonuses for completing the game too; if you complete both games it unlocks a bonus sixth waterfall mission that in my opinion is even cooler than the entire rest of the game.  If you finish this mission it unlocks Hiryu’s rival Hien, whose default Cipher is the equivalent of Hiryu’s boost attack.  Overpowered as hell but fun to run through the game again. There’s also a ton of ridiculously pretty artwork to unlock as well.

Usually mixing hand drawn art and polygons results in a ghastly mess but Capcom has managed to blend the two together seamlessly.  The backgrounds have a hand painted look similar to Breath of Fire 3 & 4 that isn’t so jarring with the gorgeous sprites layered on top.  The way the environments shift and rotate to give the most picturesque view is pretty impressive at times and nearly all of the bosses are immaculately designed.  Some of the games’ best moments (such as the assault on Balrog) will remind you of some of the greatest platforming moments of the past; sure the game is essentially a modern day rendition of that style but considering the sheer volume of terrible action games in that era it’s a god damn miracle it turned out so well.

It’s a bit of a tease as to where future action games would go and is a bit short however Strider 2 is an excellent addition to the PlayStation library and most importantly fun overall.