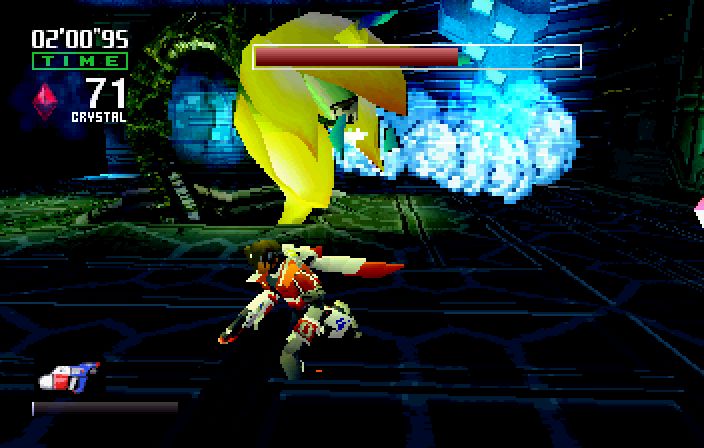 The last days of the Sega Saturn were a dark period for Sega of America as it meant the end of their North American presence for close to two years until the Dreamcast.  While the releases were sparse in 1998 the few titles Sega brought to market were spectacular with the likes of Shining Force 3 and Panzer Dragoon Saga still highly sought after.  Burning Rangers in the eyes of many was supposed to be the final send off with the considerable pedigree of Sonic Team behind it.  While it isn’t the absolute slam dunk it should have been it still is a solid title that shows the might under the Saturn’s hood.

Though primarily about firefighting you’ve never seen it like this.  Burning Rangers take place in a highly stylized future where its “firemen” use the latest scientific equipment to better put out blazes and rescue civilians.  As one of its two youngest recruits it is your mission to rescue as many people as possible and put out fires as they sprout on the way to completing each level.

There are very few games about firefighting even to this day and so Burning Rangers is still unique in that regard.  With Yuji Naka and Naoto Oshima behind it expectations were high but the game doesn’t quite match them.  As a technical showcase for the Saturn it succeeds but those same accomplishments are what bog the game down in the end.  However even in spite of its flaws BR is still fun to play in short bursts though it will leave you wanting more when it’s over.

As either Shou or Tillis the game’s mandatory training sequence will acclimate you to its mechanics.  Your futuristic suit is equipped with a jetpack that allows you to double jump and glide for in short spurts.  You can perform a variety of defensive maneuvers such as quick side steps and dashes but the most important is the back dash, which allows you to quickly avoid the sudden bursts of flame signaled by an alarm.

In many ways Burning Rangers has the DNA of Sonic the Hedgehog and Nights incorporated in its structure.  Players are equipped with freeze guns that turn errant fires into crystals that function like rings in Sonic.  When hit you lose all of them but have a chance to recover some and so long as you have at least one you will never die but if struck with zero crystals, game over.  Crystals are also used to transport the people you rescue.  Charging up the freeze gun will produce a larger explosion however you gain no crystals from this so it’s a balancing act, especially when it comes to managing the blaze level.

When exploring the pressure level will always tick upward and is reduced by putting out fires and saving civilians.  At every 20% a number of explosions will rock the environment and permanently raise the limit.  At 100% it’s pretty much a game over as these explosions will occur so frequently you can’t survive.  It’s pretty nerve wracking and will affect your overall grade at the end of the level.  Like Nights your performance is graded in a number of categories such as total victims evacuated, crystals collected, time to completion and how well you’ve managed the pressure overall.  It is a little bit of an incentive to go replay the levels for a higher score.

At four stages it doesn’t seem as though there is much content but each mission is absolutely huge!   So huge in fact that one of your team members will help you navigate each environment.  You don’t have to follow here directions of course and there’s plenty of fire victims waiting to be saved if you wander off the beaten path.  Sadly the game’s localization isn’t the greatest and you are frequently given the wrong directions meaning you are largely on your own in memorizing the huge maps.  While it is fun to sight see your sense of adventure has to be tempered as the pressure is always rising.

The missions cover a number of environments with only the first being somewhat conventional.  After that you’ll visit an undersea aquarium, an abandoned space colony and one last area I’ll leave you to discover on your own.  Though you’ll mainly deal with backdrafts and the numerous colors of flame there are security drones and other malfunctioning equipment to contend with as well as bosses.  The sci-fi aspect of the game is heavily played up and makes for some spectacular set pieces such as the Zero-G segments in space and the equally spectacular surroundings of the game’s last mission.  As the environments explode in flame and transform as bridges collapse it makes for a pretty thrilling experience but one that has its fair share of problems.

If you don’t have the Saturn analog pad don’t even bother.  Navigating with the D-pad is simply too painful during extended sessions while the controls feel more natural with an analog stick.  The other issue is the camera.  Utilizing a static camera that doesn’t try to follow your movements and adjust works in the game’s tight corridors but anytime you enter a large open area it needs to be babysat far too much.  There’s no way to manually target or lock-on so you can only point in the general direction and hope for the best.

While the game’s four missions are pretty long it still doesn’t change the fact that the game is short overall and can be completed in 2-3 hours.  Earning higher scores on each mission can be fun and checking the e-mails from the people you’ve rescued (108 in total) is nice but it doesn’t make up for the lack of content.  Once completed the game will randomize each level but remixes aren’t the same as fresh new content.

Burning Rangers garnered a lot of attention for its graphics and Sonic Team should be commended for what they were able to pull out of the Saturn but in the process they’ve literally broken the system.  The real time lighting effects are at a higher level than in most PlayStation and Saturn titles and is striking in motion.  The true hardware transparency was not thought possible on Saturn and is used extensively.  This all comes with heavy price as you can literally hear the system straining to keep it together.  There is an excessive amount of pop-up and the frame rate dips into the single digits at times.  The art direction is solid but can be ugly at times as there is a heavy level of screen tearing going on.  If they would have tempered their technical ambitions slightly this could have been something special.

It isn’t the grand finale most were expecting of one of the Saturn’s final titles but Burning Rangers is still solid.  If ever a game screamed for a remake on more powerful hardware this is it.