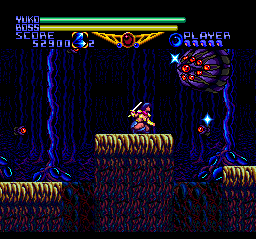 With so many versions of each installment in the Valis series floating around it’s pretty challenging to figure out which are worth your time.  As much as I’d like to remember the series fondly in truth each game released in the US had problems.  Valis II for the Turbo CD is a stripped down version of the MSX original and unfortunately the only one officially released in the US.  While side scrolling action titles for the CD add-on weren’t plentiful I would still say seek elsewhere for your action gaming fix.

With Yuko’s defeat of the evil emperor Rogles peace has returned to the dream world of Vecanti.  However that peace doesn’t last long before Vecanti is thrown into a civil war between two factions; those loyal to Rogles and the forces aligned under the new emperor Magus.  With their army on the losing side the anti Rogles faction tries to steal Yuko’s Valis sword to tip the scales and ends up drawing her into the conflict as well.

Honestly outside of the use of an extensive number of cutscenes and some voice acting Valis II could just as easily been a cartridge game.  This is a short game by series standards and I feel the memory dedicated to extravagant excesses would have been better spent improving the core game.  With a short uninspired quest that does little to justify its use of a compact disc the Turbo CD version of Valis II is one of the most disappointing entries in the series, maybe even more so than the Genesis port of the original.

Unlike the first game Yuko’s sword can fire a basic projectile right from the start, eliminating the need to get up close and put yourself at risk.  The slide has been removed and the levels simplified as a result.  Power-ups are split into two categories, special weapons and special items.  There are only three weapons available but each can be leveled up three times: Cutter, which produces a small wave that becomes a full crescent moon at full power; Homing, a heat seeking missile that is weak; and Dual, which produces two shots, one horizontal and another diagonally.  The special items function like magic but suffer from spotty activation.  Even playing through the entire game I was never 100% sure how to activate them and it seemed to occur randomly.

This installment of Valis is very fast paced but feels uneven in all nearly all respects.  For the first three Acts you’ll do little more than kill every enemy that approaches in a straight line with next to no deviation until you reach each level’s boss.  There aren’t even any side paths available to search for hidden power-ups.  It’s in the game’s second half that it picks up with more intricate level design and tougher enemies.  With trickier enemy placement and a host of items just waiting to be found you’ll actually have a reason to explore these gargantuan maps.  I don’t know where the inspiration for the second half of the game came from but it makes an overall weak package stronger.

It doesn’t excuse the overly simplistic gameplay (which is even a step back from the game’s first episode) but it wasn’t always this way.  In its original form on the MSX and X68000 Valis II was a much deeper game.  There were more weapons present that could be upgraded four times rather than three.  Yuko had access to magic spells that used jewels rather than MP for a variety of effects such as freezing time, cutting damage in half or even destroying all weak enemies on screen.  There’s even an item that grants the power of flight for two out of place shooter segments.  Nice idea in theory but wholly incongruous in a side scrolling action title.

The biggest loss would be the different outfits Yuko could equip.  More than just for cosmetic purposes each costume offered separate benefits that made them worth switching in between levels.  Rather than finding items to extend the life bar each outfit performed that function or conveyed other bonuses such as increased defense at the expense of weapon power.  The standard armor used in all of the promo art is well rounded for those that didn’t want to bother with this whole system.  In a way some of these suits are still in the CD version but they are purely cosmetic.

The visuals follow along the same lines as the irregular gameplay.  Act 1 is a flat and ugly cityscape that somehow features even less detail than the Famicom Valis.  The even numbered Acts are visually inspired and seem alien in their design with the kind of background detail you couldn’t achieve on the NES.  The bosses are well designed if a bit too easy to defeat but at least they keep in line with the rest of the series.  The cutscenes which seem to be where most of the effort was spent are enhanced over their 8-bit PC counterparts but do come with some concessions.  They are heavily letterboxed and only occupy a fourth of the screen.  They aren’t as grainy but are heavily pixelated.  There’s a noticeable decrease in the amount of blood during these scenes; the PC versions were quite the bloody spectacle and while the violence is still present it has been toned down, not that I’m complaining.

As it is with nearly every installment in the series Valis II has an awesome soundtrack but what really stands out is the fully voiced cut scenes and banter before boss battles.  I won’t go so far as to say it’s completely bad but it does suffer from hammy acting and a bad script.  The long exchanges prior to each boss are completely unnecessary and are another example of the game’s excessive nature.

As Telenet/Renovation’s first Turbo Grafx/PC Engine title some mistakes can be forgiven but that doesn’t stop this version of Valis II from being a disappointment.