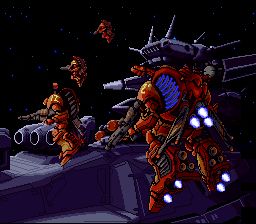 Even with the knowledge that Metal Warriors was developed by Lucas Arts it’s still hard to believe that this is not an official entry in the Assault Suit series. Adding to the confusion is the fact that Konami also published it in the US.  Cybernator is a lost classic of the 16-bit era and so any word of a potential sequel was cause for celebration.  Although it is does not officially take place in the same universe Metal Warriors could very easily been rebranded with no one the wiser.  However in spite of its similarities to that series it has enough unique features to stand on its own and is an excellent game in its own right.

In the year 2102 the United Earth Government has come under attack by the forces of the Dark Axis, led by a man named Venkar Amon.  Their only hope of fighting back rests on the shoulders of the Metal Warriors, mech pilots able to function in any terrain thanks to their mobile suits.

Right way anyone familiar with Cybernator will be able to jump right in as the two games are very similar.  The Nitro suit is equipped with a plasma rifle, beam sword for close quarters combat and two shields.  A manual shield can be raised to block incoming attacks while a plasma shield can be deployed which hovers in the air for a few moments, stopping fire and also damaging anything it comes in contact with.  There are a few major distinctions to go along with the air of familiarity.  Weapons no longer need to reload and the dash move is gone however you can hover indefinitely in its place.  The few weapon upgrade available feel more problematic than the standard plasma rifle unfortunately; the bouncing shot isn’t as useful as it sounds and the seeker shot is weak.  The secondary power-ups are pretty powerful although limited such as rockets, grenades and even a gravity switcher.

Outside of the few secondary weapons in the game and instead the game relies on its vast selection of mechs for diversity.  In addition to the standard Nitro unit there are five additional suits you can take control of, all with differing attributes.  The Prometheus is the bulkiest and most well equipped mech but trades firepower for maneuverability since it can’t fly or jump.  The Spider can climb walls and trap enemies with its webs but lacks defense making it terrible for heavy combat.  The Havoc is sturdier than the Nitro with better defense and weapons but loses some of its flight capability.  The Ballistic unit is unique in that most of its power lies in how it’s abilities are paired up with its charging function.  The rarely seen Drache requires finesse to use but in the right hands can be the most effective.

Outside of its mechs Metal Warriors greatest asset is its mission structure.  Each of the game’s nine missions all have a particular goal however your objectives can change multiple times during the course of a level.  The third mission tasks you with securing the enemy base however in the middle of it you have to protect the core generators from being destroyed and taking the base with them.  Once that is complete you then have to secure one of their gunships for the Earth’s use.

There’s a great deal of variety among the missions available that keeps the game from becoming stale over time.  In fact there are very few that are as simple as reaching the far end of an installation for completion with most relying on completing specific tasks.  Some of the most challenging are those that task you with guarding a facility from attack using very limited resources or in a particular suit.  The second mission has you systematically taking over an entire gun ship.  As you progress the level design becomes more complicated and start to rely heavily on leaving your current suit behind to operate switches and such.  It’s a nice touch and the game does an excellent job of making you feel incredibly vulnerable when exposed in such a fashion.  The one mark against the levels would be that each one is that the majority are essentially one large maze that you have to navigate (there is a map) and lacks the intricate set pieces of similar titles.

Like Cybernator Metal Warriors can be difficult however I found the game more balanced overall.  Those with itchy trigger fingers need not apply as the game moves at a much more leisurely pace and expects you to do so as well.  There are more health packs evenly spread throughout each stage and so long as you leave your current mech before it explodes you can still find another to keep the mission going if any are available.  Limited continues mean you’ll have to work through the game a few times before ultimately completing it and the game is entirely worth it.

As a late generation SNES game Metal Warriors looks phenomenal.  Though it lacks the action movie set pieces of Cybernator the overall presentation is much more solid due to the varied color palette.  The harsh metallic greys and browns have given way to lush forests, arctic fortresses, and even a trip inside an underground research base near a volcano.  Although the sprites are smaller the mech designs are just as intricate and exhibit all sorts of minor details.  There is no HUD so the only way to gauge how close to death you are is by battle damage, with your mech slowly decaying with every hit until it loses both arms and can no longer attack.

In between missions are full screen cutscenes that are animated to an unheard of degree for a cartridge game.   I’ve played Sega CD games with less animation than this.  Despite its development in the US the game’s overall art direction is heavily Japanese anime influenced with and its cutscenes wouldn’t look out of place in an episode of Mobile Suit Gundam.

Metal Warriors deserves a higher profile than it has received up until now and is one of the SNES’s finest action games.  Even the game’s split screen deathmatch is still fun despite the limited options available; this is the total package in every way.  Unfortunately MW is pretty pricey due to its lack of sales but it is more than worth tracking down in my opinion.