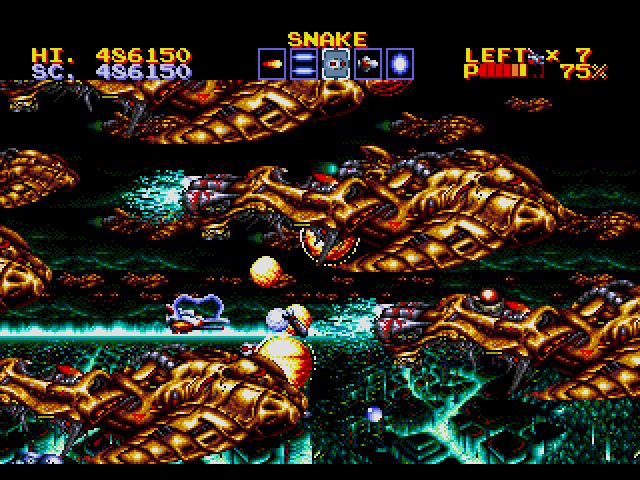 No one will probably ever know why Sega of America renamed the last 16-bit installment of the Thunder Force series but make no mistake: Lightening Force is Thunder Force IV.  As the final game in the venerable series for Sega’s console LF set the bar high and is quite possibly the greatest shooter for the platform, no small feat considering the heavy competition.  But this is no ordinary game.  Lightening Force refines the series mechanics and pushes the system harder than most and breaks it but the game never suffers too heavily in the process.  All this and the game was released in 1992!

Honestly there wasn’t much that needed to change when it came to the series’ core mechanics.  You can adjust your speed in increments of 25% or slowly a percent at a time which actually comes in handy when you find a sweet spot.   You still begin the game with the standard and rear firing back shot so at the very least if you completely suck at the game you aren’t completely unarmed. Though fairly weak they can be upgraded to the blade and rail gun, two of the most useful armaments in the game.

The rest of the weapons are all new or slightly tweaked versions of prior favorites.  The Hunter is larger and more aggressive but sacrifices power for its search function.  The Snake is the equivalent of Gradius III’s photon torpedoes and crawls along the ceiling and floor.  The Three-way shot is my least favorite due to its implementation.  It fires in the last direction you’ve moved and aiming it in the heat of the moment is more trouble than its worth.  Once again you only lose the current weapon selected upon death which is more than fair.

The CRAW (God damn it I’m pretty sure it’s supposed to be CLAW but whatever) returns as a rotating option/shield and also sees an upgrade.  At the game’s midpoint it becomes enhanced and allows you to use the Thunder Sword, a massive lightning attack that needs to be charged first.  Its powerful but has a few drawbacks; to charge you need to avoid firing and in a game this hectic it’s near suicide.  Once unleashed the force of the blast also sends you backward slightly which can cause cheap deaths.

Unlike Thunder Force 3 you don’t choose what order you’ll tackle each stage; instead you pick the order of the first four and play them out.  This is then followed up by another six levels making this one of the longest shooters of the time.  The standard ice, water, and desert levels are present but you’ve never seen them like this.  Even derivative levels like the Air Raid put similar fare in other games to shame.

The levels are set up a bit differently this time and will take some getting used to.  Nearly every stage makes use of an elevated playing field that is two or three screens high.  It offers more room to maneuver and pick your own route through each level, a pretty cool side benefit.  With a field so large it’s easier to pick a lane and stick to it, avoiding particularly dangerous enemies in the process but you might also miss out on crucial power-ups.  You aren’t completely taking the high ground as the more aggressive and larger enemies will follow you to attack.  Overall it is fairly balanced in that you don’t have to worry about stray bullets hitting you from off screen.

The fast pace that the series is known for returns and the game seems to move at an even more blistering pace at times.  It’s very rare to have a moment to yourself as the enemies attack non-stop.  Even completing a level offers a few brief seconds as the game tallies your points before thrusting you back into battle.  It sounds pretty irritating however the game is fairly balanced in that extra lives can be found at regular intervals and a decent number of continues.

Which isn’t to say that the game is lacking in challenge.  Although you can select your difficulty (only the truly insane will ever complete this on Maniac) it still puts up a fight even on the easy setting.  The most significant challenge comes from the brutal bosses, massive bullet sponges that take a beating only to come back in damaged form to seek revenge.  It picks up in the game’s back half and the final two stages are so over the top I don’t blame anyone for using a cheat code just to see the ending.

There were many fantastic shooters released throughout the Genesis’ lifespan that pushed technical boundaries and they all pale in comparison to Lightening Force.  Simply put this is one of the most beautiful games ever released for the system from both an artistic and technical standpoint.  We’re talking parallax scrolling nearly ten layers deep as you visit a wide variety of alien worlds, all distinct from one to the next.  Some of the world’s you’ll visit will seem slightly familiar in concept to other games except the presentation here blows them out of the water.  The Air raid level in particular is mind boggling and wouldn’t look out of place in a Neo Geo game as massive space ships attack from both the foreground and background.  Even the mechanical boss designs increase in both size and complexity as the game progresses until you’re fighting screen filling monstrosities so large you barely have room to maneuver.

All of this technical splendor does come with a heavy cost however.  The game has an insane amount of slowdown and flicker uncharacteristic of a Sega title.  The mighty 68000 struggles to keep up with the onscreen chaos as the game chugs worse than SNES Super R-Type and Gradius III.  Normally this is only reserved for the bosses where it actually helps keep you alive.  In the early levels that are slow it isn’t much of a problem but after those initial four stages the pace picks up and sadly the game struggles to keep up.  If not for the slowdown Lightening Force would be perfect.

In 1992 Technosoft threw down the gauntlet and released a shooter so seminal other developers struggled to catch up even years later.  Even the mighty Gleylancer and Eliminate Down can’t match Lightening Force’s excellence.  It is the definitive Genesis shooter and one that every fan of the genre should track down.