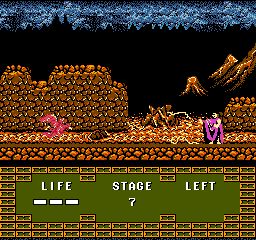 What’s this?  A Sega game on the Famicom?  Much like Tengen’s arcade ports of a few Sega classics the same licensing situation was happening in Japan.  While it might sound like sacrilege that Sega would allow ports of their respected properties on the competition in the end they did benefit as they still got a cut of that lucrative Famicom money.  The quality of these games was all over the place and Altered Beast is no exception.  Altered Beast wasn’t a very good game outside of its transformation mechanic and graphics plus had serious flaws, flaws that are also replicated here and bring the game’s quality down despite efforts to broaden the experience.

Despite the disparity in hardware the game does its best to mimic the look of the arcade game and considering the platform does a pretty decent job.  The backgrounds are the same minus the parallax scrolling (which actually wasn’t present in the arcade) and pretty detailed.  The sprites have taken the biggest hit as they are incredibly small and lacking detail.  The single greatest loss would be the sampled speech and sound effects.  The game’s music was more ambient so the sound effects had a greater impact; here they are ear grating and will make you want to reach for the mute button.

Considering Sega handled the Master System port themselves it’s a god damn shame that this Famicom rendition has turned out better.  In terms of overall look it’s no contest; the MS version is actually pretty well done.  But its frame rate is an absolute mess with tons of flickering sprites on the level of NES Super Dodgeball.  It is so jerky that the game is barely playable.  And to top it off it’s missing an entire level!  My initial experience with Altered Beast came from this version and I was unimpressed.  It wasn’t until the following year that I would see what the game was supposed to actually be.

The layout of each stage is still generally the same as well as the enemies.  You still wander through each stage as it loops until you’ve collected three transformation orbs and assume your beast form for that level.  The transformations are disappointing in this version due to the lesser sprites.  In every other version your dude noticeably bulked up with each successive orb but you’ll barely notice it here.  The impact of the full transformations doesn’t hit as hard since they’ve removed the cool full screen cinematic as you let your inner beast out.

It sucks as that was the sole redeeming mechanic of the game as the rest of the package was pretty lackluster.  The levels are incredibly short; once you’ve collected three orbs you are immediately taken to the boss battle with Neff in this version.  Aside from the brevity of its levels Altered Beast suffered from bad hit detection and pretty high level of challenge.  At the very least the game is easier since you aren’t swarmed with enemies at every turn but cheap hits still come regularly as it is hard to tell where to hit certain enemies.  Your reach is shorter in keeping with the reduced sprite size so you have to chance getting in close for kills.  The bosses are less aggressive in their attacks but in most cases you can barely tell if you are hitting them or not.

The game is at least playable but not as fun as it could have been.  Which sucks because developer Asmik (there’s a publisher I haven’t thought of in years) did at least try to make this a more complete package.  In addition to the arcade’s five levels three more were added with completely new beast forms to assume.  These stages not only look fantastic but are spliced into the normal level rotation so that arcade aficionados have something new to look forward to at every turn.  The tiger, shark, and phoenix are actually pretty cool as are the bosses you’ll use their powers to face off against.   It makes me wonder if the game would have been better served as a completely original interpretation rather than being saddled with trying to replicate the arcade experience.

This is a hard one to score let alone recommend.  On the one hand it has many of the same problems that plagued the game in its original incarnation.  But the additional content does make this a well-rounded package.  I suppose it depends on your love for Altered Beast to decide if it’s worth tracking down.  I will say in the end in spite of its flaws I enjoyed the game.