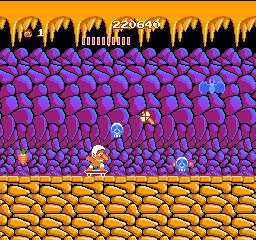 I’ll be the first to admit I was never a big fan of the Wonder Boy series.  It was one of the first Master System games I ever played and it just rubbed me the wrong way.  So it’s really odd that I found myself overly hyped for Adventure Island.  Mind you all I had to go off of was the game’s box art I saw in a magazine and the name.  But that was enough to send my imagination into a tizzy; it’s an island!  Full of adventure!  So did it live up to my imaginary hype?  No.  What does this have to do with Wonder Boy?  They’re both essentially the same game and share the same flaws.

The quick and dirty version: Wonder Boy was created by Westone and published by Sega.  Hudson obtained the rights to create their own version of the game for the Famicom/NES but replaced the title character with Master Higgins, a caricature of their spokesmen Takashi Meijin.  While the Wonder Boy series would evolve into a string of action RPGs (whose lineage gets even more complex when you add the PC Engine games into the mix) Adventure Island remained a side-scrolling platformer until its fourth NES outing and second SNES installment.

As a platformer Adventure Island follows the Super Mario Brothers mold quite thoroughly.  Both games involve rescuing a princess and both are 32 levels long, split between eight worlds.  They both, uh, star rotund protagonists in red caps too.  I want to say that last point wasn’t deliberate but you can never tell.  However the similarities end there.   There won’t be any butt stomping here as Master Higgins can instead throw stone axes (and eventually fire) once found to defeat enemies.

There aren’t too many power-ups available although the ones present are more than enough.  The eggs scattered about can yield the axe or longer ranger and more powerful fireballs which can destroy those pesky rocks and even boulders.  The skateboard allows you to move faster and absorb one hit at the expense of control since you can’t stop.  The rare fairy grants temporary invincibility but not everything is perfect in Adventure Island.  It’s easy to trip over the spotted rotten egg which spawn a grim reaper that will drain your stamina quickly.

The primary difference between this and Super Mario Bros. is the life bar.  You start each level with a full life bar however it isn’t there to protect you from hits but instead acts as a timer, always ticking down.  The mounds of fruit littering each level will refill it nevertheless the mad dash to collect more never ends.  This in essence makes the game far more fast paced as you can’t really afford to dawdle in one area too long as the danger of running out of health is ever present.

There’s an odd dichotomy between needing to constantly replenish your health and stay on the move before time runs out.  The way the levels are setup it’s more prudent to take it slow as you can never tell if an enemy will come running from behind or the exact arc frogs and bats will move.  It’s very easy to misjudge a jump, land on a rock and bounce into a snake or campfire.  But at the same time your life ticks down fast enough that it is a concern and unless you are constantly throwing axes everywhere to find hidden fruit or items you might not make it to the end on your own merits.

Overall Adventure Island is pretty solid with frequent checkpoints to chart progress and unlimited continues.  It does have a few flaws though.  The game’s controls are a bit slippery; Master Higgins has a tendency to slide around before coming to a complete stop.  The game is heavily repetitive and recycles its stage themes frequently and as early as the second round.  You’ll see variations of the same forest, cave, and cloud themed worlds up until the end of the game and it gets old fast.  The end level boss of each world is basically the same boss with a new head which is pretty lame.  Some of these same criticisms can be lobbied at Mario however it did set the mold with which everyone else followed and has more variety.

Regardless of Adventure Island’s origin as a Nintendo port of Wonder Boy it laid a foundation with which its sequels would build from.  There’s an old school charm to the game but not one strong enough to overcome its repetition.