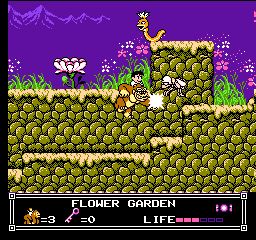 Little Nemo: the Dream Master was always a title that managed to escape my grasp growing up.  Whether it was the flea market, pawn shops, or even Blockbuster video it somehow managed to elude me for years.  After all that build up was it worth it?  Hell yes.  Little Nemo is Capcom at their peak during the 8-bit era and another feather in their cap when it came to treating a licensed property with respect.  While it isn’t as fondly remembered (if at all) as other gems like Bionic Commando and Mega Man the game more than deserves that same level of praise.

Little Nemo has been invited to the kingdom of Slumberland by its Princess to play and receives an endless bag of candy as a bribe.  Once there Nemo learns that King Morpheus has been kidnapped by the Prince of Nightmares, who wants to end all good dreams.  With sack in tow Nemo sets out to save the day!

This is as obscure a license as it gets.  Little Nemo is mostly based on the Japanese animated film Little Nemo in Slumberland which in turn was based on the comic strip of the same name from 1905.  I doubt most were aware of its origins and they missed a cool opportunity for cross promotion as the movie wouldn’t see a domestic release until after the game.  All of these factors contributed to the game’s low profile, which is sad; if the game were a little less difficult it would truly have been a classic.

As Nemo your only means of offense is the endless supply of candy given to him at the outset.  The candy itself is weak and will only stun enemies temporarily however you can keep them paralyzed indefinitely if need be by chucking more.  As you can imagine he’s a sitting duck but that’s where the animal helpers come in.  The final three levels in Nightmare Land finally allow you to use the Dream Rod and go on the offensive for a nice change of pace.

Scattered throughout every dream are various animals who will allow you to ride on their back if you feed them candy.  Chances are if it doesn’t seem interested in attacking you it’ll help.  Throughout the game there are eight animals that help will you using their unique attributes.  The gorilla has the longest life bar and can climb walls.  The bee can fly short periods and attack with its stinger.  In a really creepy ass move the frog will let Nemo sit in his mouth as he swims faster and jumps higher than everyone else.  The list goes on with each partner playing some role throughout nearly every level

The object of each dream is to collect the requisite number of keys needed to open the door at the end in order to move on.  However doing so is easier said than done.  Each dream is relatively massive in scope with the keys possibly hidden everywhere.  Thorough exploration of pretty much every stage outside of the Toyhouse is needed if you want to move on.   The game does an excellent job of providing ample opportunity to use each animal’s powers and sometimes you’ll have to use them in concert for progression.

There’s a great deal of variety from one level to the next despite the singular goal in each one.  The Mushroom forest and Flower garden are perfect introductions to the game’s mechanics however it veers off from there.  The Toyhouse is an auto-scrolling adventure with more keys than necessary.  Nemo’s house is largely non-linear and one of the most difficult due to how spacious it is; you’re going to have to search every square inch for the keys!  Conversely Cloud Ruins throws you a bone and places all the keys at the exit; all you have to do is survive until the end.  Nightmare world is exactly what the name implies with only the best gamer’s reaching the end.

I can appreciate excellent level design as much the next man however I do think Capcom were a bit too clever in this regard.  There are many keys that require a specific helper to reach which is nice but there are many instances where you’ll have to make a “blind leap” so to speak.  It isn’t always obvious if that seemingly bottomless pit will actually lead to an underground area or instant death yet this is the type of chance you’ll have to take frequently.  A good portion of the time you’ll discover where a given key is hidden purely out of desperation after combing every inch of the environment.  The fourth dream in particular places one of the last keys in an area you can only reach by swimming into the wall at a dead end.  Its design decisions like these that are truly frustrating.

Little Nemo is not a game for children despite the impression its cheery exterior might say otherwise.  Nemo himself is basically defenseless when he isn’t riding on some creature’s back and the moment’s where you have to ditch one for another are pretty tense.  Enemies respawn infinitely and any time you venture under the sea you can bet there are tadpoles that will relentlessly chase you at every turn.  Checkpoints are oddly paced so you can bet that you’ll end up replaying large segments of a given level once you die.  At least there are unlimited continues.

Slumberland is one of the most imaginative worlds conceived on an NES cartridge and is rendered beautifully within the system’s confines.  Despite the limited color palette and overall darker tone the game still manages to be incredibly vibrant.  The sprites exhibit excellent animation with the overall art direction a refreshing change of pace.  If this game is built using the same tech as Capcom’s other titles (highly likely all things considered) it does a pretty good job hiding that fact.

Outside of the advanced difficulty Little Nemo is one of the best action adventure games for the NES which is lofty praise but well deserved.  The diverse array of levels and animal helpers help elevate it above most of its contemporaries, creating one of the best games you’ve never heard of.