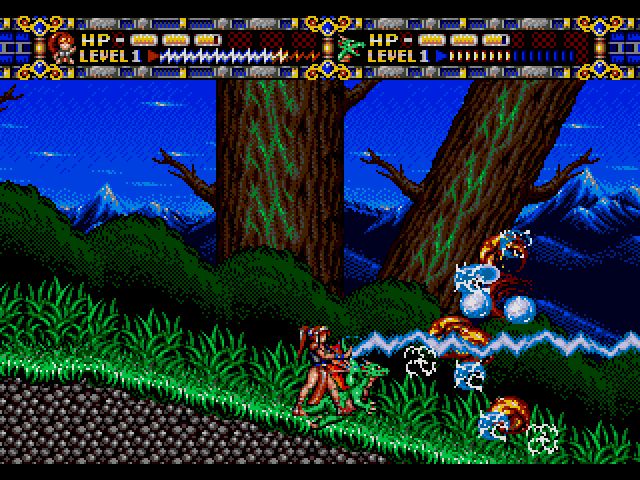 Years before Lunar and Grandia Game Arts collaborated with animation studio Gainax to create a pretty kick ass action game that went unnoticed by everyone.  I can’t possibly imagine why, I mean it went through the same Boris Vallejo filter that so many of Sega of America’s other obscure products went through, how could anyone resist?  Phantasy Star IV, seriously?  Who the hell thought changing Chaz from a 16-year old anime teen to a buff barbarian was a good idea?  All jokes aside Alisia Dragoon is an awesome action game with a pretty unique hook that deserved better than to sit in obscurity and is still a fun yet challenging adventure today.

Alisia’s father fought against the dark God Baldour when she was a child and managed to imprison him in a cocoon and send it into space.  However he was defenseless against Baldour’s followers, who torture him to death in front of her eyes.  Rather than kill her too they let her go; big mistake.  Once the cocoon returns many years later Alisia is now an adult and sets out to stop Baldour’s resurrection.

Unlike pretty much every other action game you won’t accrue a massive list of weapons or magic during the course of your journey.  Alisia’s only weapon is a thunder bolt that will automatically home in on the nearest enemies.  Holding down attack will produce a steady stream of lightning that will auto target any villains in your path but this is regulated by a power meter that charges on its own.  At full power it produces a rolling blast that covers a 180 degree arc in a more powerful strike.  Depleting the meter fully leaves you defenseless for a few seconds but it recharges pretty fast.

Aside from the thunder you have four familiars that can be summoned to fight alongside you, each with their own life bar and form of attack.  The Boomerang lizard shoots….boomerangs.  The Dragon Frye spits fireballs, the Thunder Raven produces a stream of thunder that targets distant enemies, and the Ball of Fire burns enemies on contact and acts as a shield.  Managing your familiars is key as there are power-ups that will permanently increase their health and attack power.  Like TMNT you can switch them out when necessary and considering the odds against you it is well advised.  Allowing a pet to die leaves it unavailable until you collect a revival item which unfortunate resets them back to level 1.

The main conceit most will have to adapt to is that this is not a typical action game and should not be approached as such.  Due to the nature of your attack and the amount of enemies that attack you have to take things slower.  The power bar usually resets back to about 75% after each attack so it does not take long to reach the max and its worth waiting.  There’s no time limit to worry about which further reinforces this point.  There’s an even mix of weak fodder alongside the stronger heavies that take a little bit of a pounding before going down.

This is not an easy game and in fact I can see most gamers dying in the first few minutes until they adjust to its pace.  In the early stages it’s easy to keep a full charge and stay on the move but by the third stage all hell breaks loose and the attacks come nonstop, with enemies appearing out of thin air or attacking in groups of 7-8.  It’s at these points that you’ll possibly exhaust your magic meter and be left vulnerable.  Despite being able to increase your attack power up to eight levels the homing thunder does feel underpowered at times, which is where the pets come in.

Your choice of pet can have a significant impact on how difficult your travels will be.   Although you don’t have direct control over their actions they are generally smart enough to attack anything in their vicinity.  Using the right one as the situation dictates makes the difficulty bearable; as an example the Boomerang Lizard can destroy the turrets on the airship of stage 3 in a single hit whereas you’ll more than likely drain your meter trying to do the same.

Graphically Alisia Dragoon is solid but not spectacular.  The world is heavily influenced by Nausicaa of the Valley of the Wind with its blend of high fantasy and advanced technology.  It might seem silly to have demons roaming around a high tech airship but somehow it all fits.  The animation and design of the enemies is superb; for an early 1992 title it holds up pretty well.  The bosses in particular are the game’s highlight and wouldn’t look out of place in a Treasure game.  The soundtrack is suitably excellent; Game Arts were not slouches when it came to making the Genesis’s sound hardware sing.

Alisia Dragoon is slightly more challenging than most gamers are accustomed to in the genre but rewards players with unique gameplay and a long quest.  Due to its low profile it can be hard to find but in my opinion is well worth tracking down.