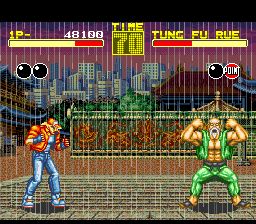 I don’t think it’s a stretch to assume that the vast majority of us who grew up in the 80s and 90s did not have the money to buy a Neo Geo.  At $600 you would have to hold your parents at gunpoint if they even had the cash to spare.  So the only way to experience that high quality arcade gaming at its finest would be to plunk down all of your spare change in a coin op or hope for 16-bit ports.  Takara would make a name for themselves by publishing ports of the best Neo Geo fighting games to the SNES and Genesis.  On average they were generally pretty good to excellent considering the gap in hardware but in spite of their track record they did not get off to a good start.  The SNES version of Fatal Fury is an absolutely dreadful game that robs the Geo original of all its charm, leaving a pale copy in its stead.

Allegedly Fatal Fury began development before Street Fighter 2 so there’s always been a what if scenario about the impact the game would have had if it were released first.  I don’t doubt that Fatal Fury would have been more popular but the fighting engine in SF2 was so much more advanced than every fighting game that the outcome would still have been the same.  Though it lacked the combos of that game Fatal Fury still had a colorful cast of characters with interesting special moves, great graphics, and a multi plane system that was at the least unique.

Remove pretty much all of those and you’re left with this pathetic SNES version.  From the bad controls to the missing features something went terribly wrong here.  The SNES Fatal Fury is the same game in name only and should be avoided at all costs.

The single player mode only allows you to choose between Andy, Terry, and Joe Higashi which makes sense as the rest of the cast are hired by Geese to stop you.  The heroic trio are the most versatile of the cast in terms of move set so it isn’t a loss in that regard.  You can choose your starting opponent of four who once defeated lead to the four bosses; if the formula sounds familiar that’s because it mirrors Street Fighter 2.

The home version loses a lot of what made the arcade game fun.  During single player Geese Howard kept track of your progress in cut scenes but here you only get a lame framed image with a brief quote.  The arm wrestling minigame between matches has been replaced by a tire beating game which once again is similar to the barrel busting game in Street Fighter 2.  It isn’t all bad however, all 8 boss characters are selectable in multiplayer but only for player 2; whoever thought limiting player 1 to the same three characters needs to be shot.

Neo Geo arcade cabinets only had four buttons so the control scheme is kept simple.  Just a punch, kick, and throw button.  Combos don’t exist in the game so battles feel more like brawls.  In the arcade the game operated on a dual plane system; certain attacks will knock your opponent into the background and if they jumped to the back attacking would let you follow.  That has been removed in this version removing some of the game’s unique flavor.  Being able to maneuver around your opponent added a light strategic element to combat and bouncing them off background objects was just plain sadistic fun that is nowhere to be found in this version.

You have NO idea how hard that was to pull off.  None.

The controls are sluggish and simply aren’t responsive.  There’s a delay whenever a button is pressed that becomes frustrating to deal with in short order.  The hit detection is also suspect; I’ve seen many a direct blow go completely unregistered.  Executing special moves just flat out doesn’t work.  I’ve been playing Street Fighter for over 20 years now, I know my way around a quarter circle motion and the recognition of your input is spotty at best.  With a computer AI that is aggressive as a hornet you’ll be kissing the pavement in record time every round.  This is almost as bad as Eternal Champions.

It would be foolish to expect the SNES to match the Neo Geo game but it at least compares favorably.  The sprites have only seen a slight reduction and the color palette is nearly the same.  Some background detail has either been reduced or removed but otherwise they’ve nailed the arcade game’s look.  The music and sound effects on the other hand are absolutely butchered.  The sound effects are heavily muted and actually cut out completely over the screeching music.  Fatal Fury had a pretty good soundtrack so hearing it mangled like this is a shame; the SNES can do far better than this.

I don’t know if it was a lack of budget or simply time constraints but Takara’s stab at Fatal Fury turned out pretty poor.  The few unique elements the game had in the arcade being removed has left this just a generic fighting game with poor controls which is the kiss of death in this genre.