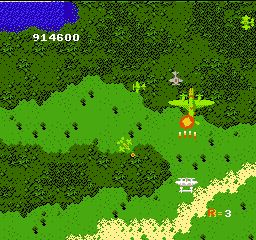 For some games I guess you just had to be there to experience it when it was new.  Capcom’s 19XX series of shooters were some of their first shooters and their longest running.  Originally released in the arcade in 1984 it saw ports to nearly every format imaginable, signifying its success.  To me however I was always left with the impression what’s the big deal?  I suppose it was an enjoyable romp back at its original release but in the wake of better games such as Gradius and Darius 1942 simply doesn’t cut it.

The story is pretty simple: as the pilot of the Super Ace your mission is to fly from the US to Japan, destroying as many fighter jets as possible along the way.  Set during the Pacific Theater of World War 2 it should be noted that Capcom is a Japanese company producing a game in which they are the enemy.  A weird dichotomy if ever there was one.

As a port the NES version is pretty accurate, not surprising as this wasn’t a graphically taxing coin op. Disregarding its status as an arcade port 1942 simply doesn’t hold up as gameplay wise.  Its 32 levels are long and repetitive to an insane degree with little variation to break up the monotony.  In 1985 Gradius might as well have come from another planet considering how much more “advanced” it was compared to 1942. With few redeeming qualities 1942 is simply a relic from another time best left forgotten.

The power-ups are few in number but aren’t really necessary to survival.  A POW icon will multiply your regular shots significantly while further collection will award you two smaller planes that function like options.  Unlike Gradius these options can be destroyed by bullets or collisions.  The most important maneuver available is the loop, which grants temporary invulnerability while you perform a barrel roll.  Although limited the timing of this move can mean the difference between life and death.

Generally speaking nearly every level plays out the same: groups of smaller planes arriving in varying formations while others try to use hit and run tactics.  Occasionally a larger air ship will show up to divert your attention, requiring more shots to down.  It’s in these moments that you can easily succumb to enemy fire as you focus on the big fish.  The occasional boss fight does break up the monotony but at most they’re only a brief respite from fighting countless smaller ships.

At 32 levels there is very little variation in enemies or scenery meaning every 5-6 levels will feel near identical.  The game’s lethargic pace also doesn’t help either.  Whether it’s your ship or the enemies everything seems to move at a snail’s pace.  Things can get pretty hectic at which point the game suffers from severe slowdown and flicker, a Micronics trademark.  Not that it makes much of a difference in the long run whether you die because of slow movement or bullet hell the game has infinite continues meaning you’ll have it licked eventually provided you can tolerate the game that long.

This is the extent of the game’s visual variety.  All 32 levels of it.

Graphically the game is old and it shows.  Developer Micronics did a relatively decent job with the port, a far cry from the butchery they were known for with the likes of Ghosts n’ Goblins and Athena.  Get used to seeing that same ugly blue sea as it won’t change until midway through the game and even then you’re going to see the same green grass and blue rivers rearranged over and over.  It isn’t until the last 5 stages that you’ll fight new enemies over a sort of new city backdrop.  Overall the game has pretty poor graphics.

There is no music in the game aside from the end level jingle.  The one looping “song” if you can call it that is just a series of drum beats repeated throughout the length of the entire game and it never changes.  It will drive you insane like it did my family members.

All developers have to start somewhere and Capcom would soon move on and create the superior 1943.  In the meantime 1942 can be appreciated in a historical context (wow that can be taken figuratively and literally) but has no redeeming qualities whatsoever and should be avoided at all costs.