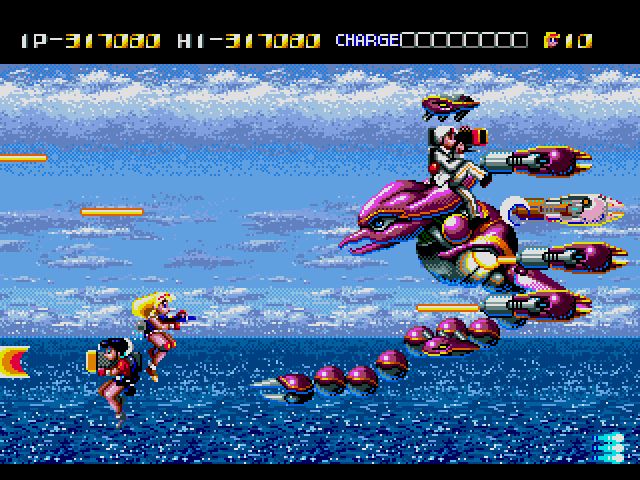 As oversaturated as the shooter genre would eventually become during the 16-bit era original ideas would still pop up from time to time.   Vik Tokai were one of the first NES supporters to dip their toes in the Sega waters in 1991 and produced a shooter that was definitely different from the rest of its contemporaries as their first project.  Trouble Shooter didn’t reinvent the wheel but used its interesting gameplay hook to become a solid shmup and certainly better than generic trash such as Arrow Flash and Whip Rush.

Trouble Shooter’s anime style theme is what initially drew me to the game.  Although it was released in 1991 I didn’t get around to it until the mid-90s; by that point I had become an anime fan and the similarities between this and series such as Dirty Pair and Gunsmith Cats sparked my interest.  With its typical 80s big hairstyles and wacky plot about a pair of hired guns trying to save a captured prince from a military dictator it could easily have become an OVA during the boom years of the anime industry.

Of course, no one in the US would actually know about any of this due to the god awful box art.  Holy shit, this is Mobile Light Force levels of missing the plot but at least in this case the protagonist’s outfits  somewhat resemble the game.  I would put the game’s lack of popularity partially on its cover but that’s not much of an excuse; Mega Man was far worse and that somehow became an international hit.

Prior to the start of each level you can select one of four special weapons that produce devastating results but has a brief recharging period after each use.  The Blizzard produces a large circular shield, the Lightning Storm rains down thunder from heaven, the Tidal Wave produces a large beam of light that scrolls horizontally and the Avalanche releases a series of missiles straight forward.  Honestly while they are powerful the standard cannon is more than enough once powered up and it’s not as if the special weapons guaranteed to clear the screen.

You take control of both Madison and her sidekick Crystal as they don jetpacks in horizontal shooting action along the lines of Forgotten Worlds but this is much more than copy of Capcom’s game with breasts in tow.  While you have direct control of Madison Crystal is always behind her and can be positioned so that she covers your back or will focus her fire along with yours.  It’s a unique idea and one that works extremely well.

The levels scroll both vertically and horizontally and so positioning plays a role in dealing with the chaos.  In most cases you can simply leave Crystal targeting your back side but there are definite points where the extra firepower is necessary.  Crystal is invincible so you won’t have to worry about taking cheap hits due to controlling dual heroes.  You can use this to your advantage somewhat but chances are if she’s getting hit you aren’t far behind.  Unlike most shooters the pair are both fairly large so dodging bullets can be harder than normal; thank god you have a life bar which can be extended considerably with points.

At six stages Trouble Shooter is shorter than the likes of Thunder Force but you’ll still get your money’s worth as each level is fairly long and just plain weird.  Most of the opposition is composed of mecha of varying sizes, especially the bosses.  The boss of the first stage is a Mazinger style robot who spends the first half of the fight laughing at you and soaking up your hits before taking you seriously.  Stage three takes a page out of R-Type as you fly around a massive battleship and take it apart piece by piece.  The game’s final level is its greatest as it ups the ante; after saving the Prince he fights alongside you.  That’s right, you control all three at the same time for some of the game’s best moments.

In spite of that bit of insanity Trouble Shooter can feel boring at times due to its leisurely pace.  Despite the premise of a battle hungry mercenary and her level headed side kick who attempts to keeps her out of trouble the game can be devoid of any real challenge due to its generous amount of power-ups at every turn.  It almost feels like the developers were aware that the size of the sprites made them large targets since life restoring hearts can be found everywhere.  Even with limited continues I posit that most will be able to complete the game in an hour.

But what an hour it is.  Regardless of the ease of completion Trouble Shooter is still an entertaining title that can be found cheaply.  It laid a solid foundation for it’s much improved sequel but unless you’re have large sums of disposable income you can’t afford it.