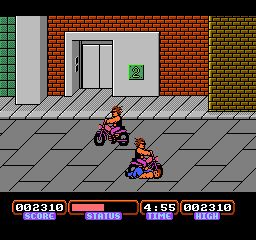 Every genre has to start somewhere and in many cases it is fun to examine those early titles and break them down, seeing which parts would set the standard for all future titles that would follow.  The side scrolling platformer began with Pitfall and Super Mario Bros., two superlative games that are still fun to this day.  And then there’s Renegade.  As a game it laid down the foundation for future brawlers but was not very good.  Its sequel Target: Renegade does little to fix its faults and is a flawed game overall.

The game’s plot involves a Mr. Big kidnapping your brother and your mission to rescue him.  I suppose that explains the game’s lack of two-player coop.  Ignore the blatant Joe Lewis rip-off martial artist on the cover; your dude isn’t anywhere as cool and is essentially the predecessor to Billy and Jimmy Lee.  Despite its status as a sequel to Technos Renegade this was not developed in Japan.  As part of Ocean’s license to port Renegade to various computer formats they were allowed to create a sequel which goes a long way toward explaining the game’s myriad issues.  Target Renegade ignores nearly all of the features that made Renegade (sort of) a classic and is a regression in every way.

The controls aren’t the most responsive or intuitive.  Both buttons control punches and kicks and to execute a jump kick you must press up and kick at the exact same time.  To pick up items you’ll have to constantly press down to squat but it is so erratic in most cases the item you were trying to grab will disappear.  Speaking of moves you are armed with a basic punch, kick, a cumbersome jump kick, and a leg sweep.  That’s all.  This is a regression from even Renegade which let you attack enemies from both the front and the back simultaneously and grab them to perform throws.  The game’s limited repertoire of moves gets old fast.

The game’s design highlights the absolute worst aspects of its control scheme.  The opening moments of the game charge you with drop kicking bikers off their choppers, a laborious task that won’t end before you’ve been run down a few times.  Not a good way to start the game.  I’d be remiss in my duties if I didn’t mention these bikers all look exactly like Bret the Hitman Hart.  Your flurry of punches and kicks do little to faze the enemies and they’ll frequently counterattack in the middle of your barrage, an element that crops up in nearly all of Technos’ future brawlers.  There aren’t many weapons available but at the very least they don’t disappear when dropped after a few times.  You’ll have to pick them up first, a job that shouldn’t be the hassle that it is here because of the controls.

Because you’re fighting options are so limited the difficulty is extremely high.  Groups of enemies come in packs of three or four and if they surround you it’s pretty much over.  It’s a tactic they are very keen to use and so requires you to be quick (well as fast as the game will allow) on your feet.  You only have one life and a generous life bar with the only means to replenish it by collecting hearts dropped by enemies.  I’ll tell you right now the game isn’t generous with these and the amount restored is so little it’s a damn slap in the face.  You’ll only get one continue during the course of the game which isn’t enough.

If you somehow manage to reach the end level bosses prepare for pain.  Anyone familiar with beat em ups knows its standard operating procedure to have each level end with some mook literally two times your size and deals ridiculous amounts of damage.  Even going by that metric Target: Renegade takes it a step too far.  Every boss takes 1/3 of your life with each attack.  That’s insane!  If you survive the game doesn’t even have the courtesy to refill your life bar which is just plain stupid.  As if the odds weren’t stacked against you to begin with.

It’s best to simply pretend Target: Renegade does not exist.  You’ll find no redeeming qualities here but instead a game that ignores what made its predecessor a hit and is instead a lesser product in every way.