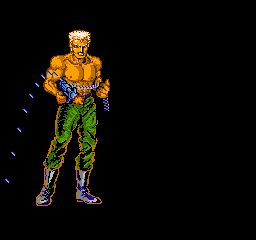 In the early days of the video game industry when most games came from Japan it wasn’t uncommon for them to see massive changes before release.  It’s only natural; what might fly over there certainly doesn’t always apply in the good old USA.  Nintendo of America were notoriously bad with the edits and to an extent deservedly so; the market had just come back and they were cautious about ruffling any feathers.

Sometimes the changes made were for technical reasons, others due to a license.  Contra falls into the first category.  At its heart the NES is simple platform that was enhanced by Memory mapper chips embedded in the cartridges.  Since Nintendo allowed publishers in Japan to print their own cartridges (only Acclaim and Konami had that privilege in the US) nearly all publishers created their own specialized mappers.  One of the most notable would be Castlevania III; its Japanese counterpart (Akumajou Densetsu) had a special mapper called the VRC6 that added 3 sound channels to the NES for better music.

On that side of the world it was all gravy but for America everyone was forced to use Nintendo of America’s own MMC chips (MMC 1-5, fun fact, PunchOut! is the only game to use the MMC2).  As you can imagine this presented problems when bringing games overseas since the Japanese side would have to reprogram them, resulting in the months long delays between the Japanese and US debut of many games.

Which brings us to Contra, which is one of the many unfortunate victims of said policy.  Konami’s VRC2 mapper allowed more animation to be displayed during the game that had to be cut.   In the grand scheme of things it’s fairly minor but a curiosity that I felt was worth pointing out.  No one should feel as though we were gipped as Contra is an excellent game, graphical enhancements or not.

From a gameplay perspective both versions of the game are near identical.  All of the levels and weapons are present, the placement of enemies are the same and if it worked in the US version then it applies here.  There’s a reason Contra is one of the most beloved classics of the NES era.  The mix of awesome weapons and excellent level design enthralled gamers in single or coop multiplayer.  Hell it made me a fan of coop gaming even though I was the scrubby little brother that kept dying due to my lack of skills.  Now that I think about it it might have scared me away from multiplayer too.

If there is a discernible difference in gameplay it would be the challenge.  This version feels easier than its US counterpart overall which to anyone that was there for its original release will remember.  It could just be that my skills as a gamer have improved over the course of the last 20 some odd years but there are minor differences that are easy to spot.  Enemies seem less apt to attack; by stage six they would frequently take pot shots but here it’s rare to see them ever use their guns.  The bosses are also less aggressive.  The god damn swinging arms of the Waterfall boss cost many gamers a few lives but here they hardly move.  The stage six boss follows a set pattern in this version while in the US game he followed you around aggressively.  For those who needed the Konami code to finish the game I imagine this all sounds like a godsend.

If the gameplay is the same the graphics aren’t.  It becomes apparent almost immediately after pressing start that this is in another league.  There’s a brief intro followed by a map that charts your progress.  Upon entering the first level you’ll notice the animated trees swaying in the wind.  There are more environmental details like this such as the snowstorm in area 5; details like these really make the world feel alive.  Once you’ve completed a level there are animated stills of your soldier notifying command of his progress.  And the ending is certainly better than what we got.  On their own these details are small but added up it makes the game seem like more of a complete package.

Not that I’m saying you should rush out and buy the Japanese Contra because we were robbed.  We’ve enjoyed the game just fine as is, I simply thought it would be interesting to take note of the differences between the two as there are dozens (maybe even hundreds?) of examples out there.  US, Japanese,……..maybe even Probotector, Contra is an awesome game all around.